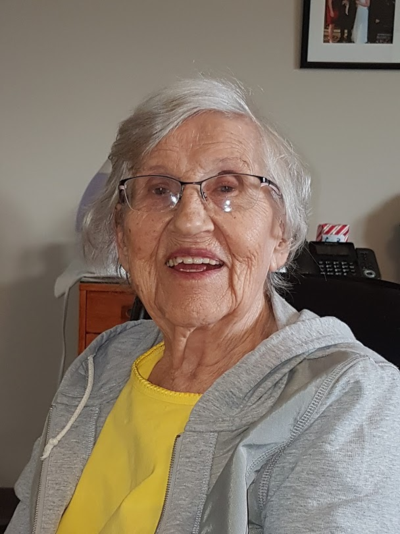 Anne Logan (Annikki Toini Abbott nee. Karhi) passed away on May 17, 2020 peacefully at Campbell House hospice in Collingwood at 94. Wife of David Logan and the late Robert Abbott.
Loving Mother to Doug (Ursula), Allan (Karen) and James (Anne). grandmother to Virginia (Matt), brother Robert (Janine), Tyler (Heather), sister Rachel (Finance Grahame) and Amanda, brother Christopher, step brother James Logan. Great grandmother to Alex, Anya, Owen and Wyatt.
Predeceased by her brothers Allan, Bill, and Edwin Karhi. Will be greatly missed by her sister-in-law Tuula Karhi.
Predeceased by Steve Edgar who became a very important addition to the family.  She will sadly be missed by Patti, Scott and Robyn.
Anne came to Canada in 1926 at 6 months old from Finland, the youngest of 3 with her family. The family went directly to Sault Ste. Marie and northern Ontario was the start of life in Canada for the Karhi family. Anne and her mother moved to Toronto for her Senior school years opening the opportunity for Graduating from Centennial College for art in Toronto. This secured a future career as a graphic artist.
Anne loved skiing and her boys becoming quite involved in the sport. She made many lifelong friends on the ski hill.
Anne followed a career as a graphic artist till her retirement. She then followed her passion for painting. She painted many scenes in water colour that she had seen in her travels. She then started painting flowers on silk scarves and sweatshirts.
Anne and Dave finally settled in Collingwood were they made many friends.
Anne’s energy along with her smile will be missed by all who knew her.
Anne will be cremated and there will be a celebration of life at a later date, when it is possible.
Thank you to the staff at Balmoral and Shannon for looking after Anne.
Donations to Hospice Georgian Triangle - Campbell House or the Collingwood General & Marine Hospital would be appreciated.