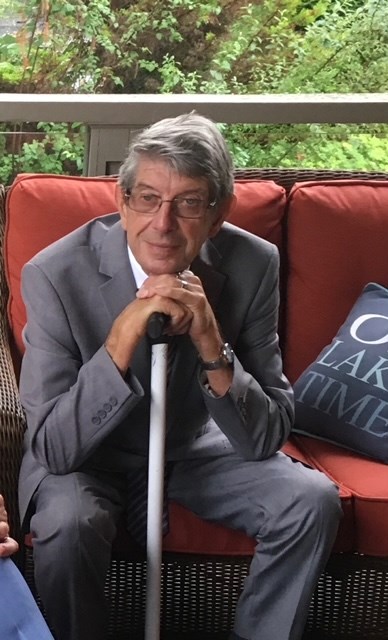 "I shall pass through this world but once.  If therefore there be any kindness I can show or any good thing I can do, let me do it now.  Let me not defer or neglect it, for I shall not pass this way again."

David was born in Portsmouth, England on September 6th, 1936.  From an early age, boats were his center of attention and he was either sketching or building model ships.  This interest led him to apprentice as a Shipwright in the Portsmouth dockyards for 5 years. Afterwards, he entered King Alfred's Training College in Winchester studying art, pottery and various shop programs.  He  taught for ten years in England, then in 1970 David immigrated to Saskatchewan following his brother Paul who had immigrated before him..  He met Laura and they were married on Christmas Day, December 25, 1972.  Eventually he decided to further his education and enrolled in Bemidji State University (Bemidji, Minnesota) where he obtained a B.A. in Fine Arts and later a Masters of Science in Vocational Education.  The family returned to Canada where David taught 1 year in the Okanagan and 16 more years in Moose Jaw, Saskatchewan before he retired and moved to Vancouver Island, B.C.  where he enjoyed sailing his 30 ft. sailboat that he had built while living on the prairies.

David was a gifted, caring man who shared his talents to help neighbours and friends and he left a legacy of love and artistic gifts - furniture, carvings , driftwood whimsies and beautiful acrylic seascapes and landscapes.   David  was also always involved in any community he lived in.  He was chairman of the Art Museum board in Moose Jaw, SK.  At Peacock High School he designed, built and painted many stage sets for its strong drama department and for many years, he helped with the Therapeutic Gardens in Courtenay, B.C. helping build the entrance and many of the outdoor buildings.  David also was president for several years on two strata boards.  He was never one to sit on the sideline if help was needed.

What cherished memories we all have of him.  He will always be with us in our hearts and we will miss his sense of humour.   Even now, we are sure you are planning a project or sailing in the sky amongst the clouds.

In lieu of flowers, donations can be made to:Hospice Georgian Triangle https://www.hospicegeorgiantriangle.com/donate or Collingwood G&M Hospital