PANAMA CITY — Four passengers have died aboard a cruise ship now anchored off the coast of Panama and two people aboard the ship have tested positive for the novel coronavirus, the cruise line said Friday, with hundreds of passengers unsure how long
0
Mar 27, 2020 9:54 PM By: Canadian Press 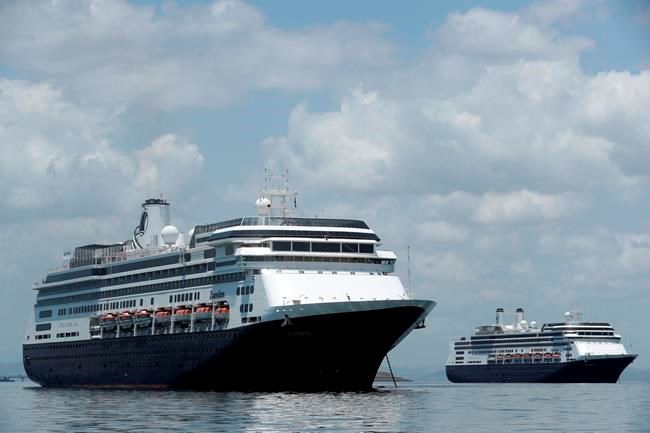 PANAMA CITY — Four passengers have died aboard a cruise ship now anchored off the coast of Panama and two people aboard the ship have tested positive for the novel coronavirus, the cruise line said Friday, with hundreds of passengers unsure how long they will remain at sea.

Global Affairs Canada says it is aware of 248 Canadians on the ship — 247 passengers and one crew member.

Holland America Line confirmed Canadians are not among the four dead.

GAC says it is actively monitoring the situation and has contacted the Canadians on board to provide information on how they can protect themselves. GAC adds it is talking with Panama's government and working with Holland America on plans to get the Canadians home.

Holland America Line said in a post on its Facebook page that more than 130 people aboard the Zaandam had reported flu-like symptoms.

“Holland America Line can confirm that four older guests have passed away on Zaandam,” the statement said. “Our thoughts and prayers are with their families and we are doing everything we can to support them during this difficult time.” It did not identify the cause of deaths.

The ship, which had been denied passage through the Panama Canal and had been turned away from other ports, was receiving medical supplies and medical personnel from another Holland America ship, the Rotterdam and the company planned to begin transferring healthy passengers to that ship.

“Priority for the first guests to transfer will be given to those on Zaandam with inside staterooms and who are over 70,” the statement said. There are 1,243 guests and 586 crew on board the Zaandam.

The Zaandam departed Buenos Aires, Argentina, on March 7. The ship was trying to get to Fort Lauderdale, Florida, after being denied permission to dock at its original destination of San Antonio, Chile a week ago. The cruise line said no one had been off the ship since March 14 in Punta Arenas, Chile.

On March 22, when a number of passengers began reporting flu-like symptoms, the ship instituted protective measures, including telling everyone to self-isolate in their cabins, the cruise line said. On Thursday, all passengers and crew received masks and instruction on how to use them.

Neil Bedford said his parents, Kim and Chris Bedford from Bradford, England, left on March 4 for a flight to Argentina and boarded the ship on the 7th.

“They were enjoying their time,” he told The Associated Press in a Twitter message. But on the 15th, it was announced that the cruise was over and they were turned away from several countries.

“The meals are delivered to their rooms three times during the day. I’m not sure if they are left outside for them to collect or if someone brings them into the room. The captain is making announcements once a day but everyone seems to be getting frustrated as it’s constantly bad news,” he said.

His parents are both in their 60s.

“They are just growing increasingly concerned with what will happen to them,” he wrote. “There is a new ship alongside them, the Rotterdam, which the healthy will be evacuated to, but they will need testing first before that can happen. They are becoming terrified of being stuck onboard the ship.”

Hayley Pillai Johnson, a medical student at Cambridge University in England, also posted on Twitter, asking questions her grandfather and his wife.

“We just want them home,” she wrote in a message.

Her grandfather, Sethy Pillai, is a 90-year-old retired doctor. His wife, Hazel Pillai, is 75 and has diabetes. They are from Oxforshire in England, and she spoke with them Friday via WhatsApp as they were quarantined in their room.

“They are scared now they have heard of the 4 deaths and never thought this would happen,” she wrote. “My grandma has a non-dry cough but no temperature, so has been counted in the ‘symptom category’. My grandpa feels tired and scared but is fine.”

“Holland America needs to get all guests off this cruise, test them and go from there. We are worried sick about them, especially as the route through Panama Canal has not yet been confirmed and neither has the docking at Port Everglades.”

Panama's Maritime Authority Administrator Noriel Araúz said Friday that the ships were authorized to , but no one would be allowed ashore.

The Zaandam had planned to pass through the Panama Canal en route to Florida, but after being inspected by Panamanian authorities, the request to use the canal was denied, said canal Administrator Ricauter Vásquez. The Health Ministry “did not give permission,” Vásquez told reporters Friday. “The ship is in territorial waters but has to remain isolated.”

It was not immediately clear where either ship would go. The Rotterdam had not requested permission to pass through the Panama Canal.

Holland America Line had announced March 17 that it was voluntarily suspending its cruise operations for 30 days “Due to the continued port closures and travel restrictions surrounding COVID-19 and in an abundance of caution.” At that point, the company said none of its passengers or crew had tested positive for the virus.

The Seattle-based cruise line is owned by Miami-based Carnival Corp.

— With files from The Canadian Press.

New study is first full list of species that only exist in Canada
Jun 4, 2020 11:48 AM
Special payments to seniors to arrive in early July, Liberals say
Jun 4, 2020 11:47 AM
Trudeau says new modelling shows COVID-19 in decline but fight must continue
Jun 4, 2020 11:47 AM
Comments
We welcome your feedback and encourage you to share your thoughts. We ask that you be respectful of others and their points of view, refrain from personal attacks and stay on topic. To learn about our commenting policies and how we moderate, please read our Community Guidelines.