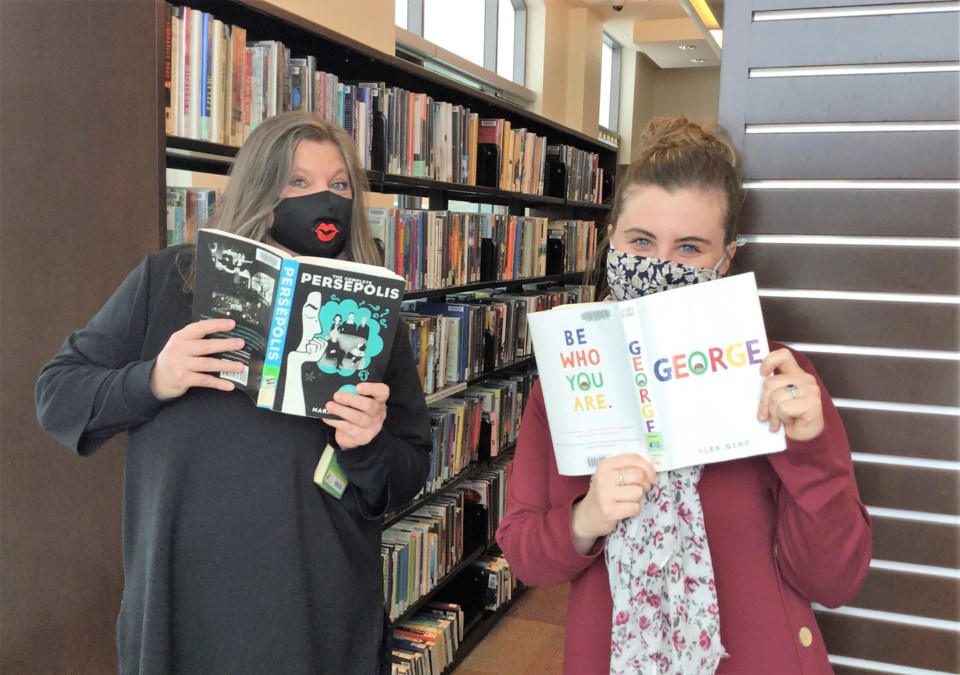 From left, Alexandra Robbinson, assistant of public services and Beth Van Tassel, coordinator of cataloguing and acquisitions at the Collingwood Public Library share their picks for Freedom to Read Week, which runs from Feb. 21-27. Contributed image

Celebrate your freedom to read whatever you like this week.

From Feb. 21-27, Freedom to Read Week is being celebrated across Canada, recognizing controversial literature and championing the rights of Canadians to read anything that piques their interest. In honour of the event, the Collingwood Public Library currently has set up a display of books that have faced calls for censorship.

“Books have a long history of being challenged, especially if they depict things that some people find different, or unknown, or real and raw,” said Alexandra Robbinson, assistant of public services at the Collingwood Public Library.

“They think it is their duty to query or censor the work, in a bid to ‘protect’ people – from salty language or sexual innuendo – not recognizing that something real and raw may well be someone's lived reality. We all have different experiences that should be shared, not shied away from,” she said.

Robbinson says many books deemed classics now were, at the time of their writing, written when cultural or racial sensitivity and awareness was not the norm, and was not widely considered.

“This can make for some jarring and potentially offensive reading by today's standards but can also act as a lesson on how far we have come and how much work we still must do,” said Robbinson.

Persepolis by Marjane Satrapi: A graphic memoir that tells details of growing up in Tehran during the Islamic Revolution. It was challenged for having Islamic content, though it is her autobiography, of life in Iran.

Underground to Canada by Barbara Smucker: A work of historical fiction, for young readers, that tells the story of a young girl fleeing from slavery. It was challenged for its depiction of Black people, though it is an anti-racist story.

Bear Town by Fredrik Backman: An adult novel about a small-town hockey team and a violent act that leaves a young girl traumatized. Bear Town was banned at a high school in North Carolina for having a terrifying effect on the children when the book was included in the school’s curriculum without pre-approval.

The Hate U Give by Angie Thomas: A bestselling young adult novel and feature film about a 16-year-old girl who balances her life between living in a poor Black neighbourhood and the all-white suburban prep-school she attends. Starr rises as an activist after she witnesses her childhood friend get fatally shot at the hands of a police officer. The Hate U Give was banned in an entire school district in Texas because of the drug use and explicit language featured in the novel.

George by Alex Gino: A story about fourth-grader Melissa whose family and friends all look at her and see George, but she knows she’s a girl, not a boy. A school in Oregon banned George because the main character is transgender.