The documentary will premier at the town's Envisioning a Future toward Reconciliation event on Jan. 30.
Jan 19, 2019 11:00 AM By: Erika Engel 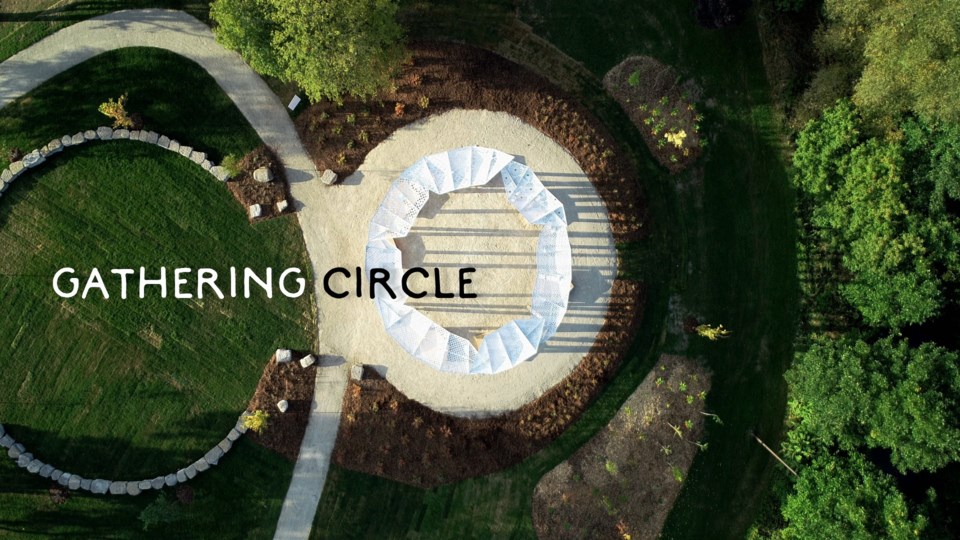 The title screen from a documentary produced by Mountain Goat Film Company and the Town of Collingwood on the Awen Gathering Circle, which will premier on Jan. 30.

What began as a short how-it’s-made video on the construction of Collingwood’s Awen Gathering Circle, became a documentary about collaboration along the path to reconciliation.

Tom Strnad, one of the filmmakers on the project said the film became more than a behind-the-scenes look at the design and construction of a structure as soon as he began interviews with those involved. Initially, the town wanted a short video showing how the gathering circle was made. As the filmmakers dove into how it was made, both Strnad and the town began to see the story went deeper than laser-cut steel and cleaning up an old landfill.

The Gathering Circle was created with the direct involvement of indigenous architects, and the idea was inspired by a concept Dr. Duke Redbird came up with – to pair seven Ojibwe grandfather teachings with the seven layers of a food forest.

The ten-minute film includes interviews with Cal Brook of Brook McIlroy and Ryan Gorrie, one of the Indigenous architects on the design team.

“The story behind this is perhaps more important than the thing itself,” said Gorrie in the film.

“Seeing it come from basically a pile of what used to be a landfill there … Witnessing the opening ceremonies and learning the stories, the spiritual journey of it, and the journey the film took as well, it really comes together in its own way,” said Strnad. “There’s something special [about the gathering circle]. I think it really brings everyone together. I think it’s a really important step in the truth and reconciliation process.”

In fact, the film is part of the agenda for a town event called Envisioning a Future toward Reconciliation on Jan. 30. The presentation and discussion, which takes place from 7 p.m. to 8:30 p.m. at Simcoe Street Theatre will include a screening of the documentary, a presentation by Mary Louise Meiers on the Call to Action #83, a reconciliation art project that has combined indigenous and non-indigenous artists brought together to reflect past experiences and envision a future toward reconciliation through their artwork.

Some of the artwork from this project is currently on display at town hall.

Meiers’ presentation will include some of the artists and presiding elders. The evening will conclude with an open discussion.

Tickets to the event are free, but the town is asking guests to reserve a spot online here, or by emailing the Arts and Culture department here. artsandculture@collingwood.ca.

Strnad said he is currently working with the town to get the film into various film festivals around the world.

Clearview Township officials provide COVID-19 update
Jul 4, 2020 11:45 AM
Comments
We welcome your feedback and encourage you to share your thoughts. We ask that you be respectful of others and their points of view, refrain from personal attacks and stay on topic. To learn about our commenting policies and how we moderate, please read our Community Guidelines.