Residents drill council on cost of inquiry, town says costs were out of their control

Original estimate of $1.5 million escalated to $8 million paid to date, but town says there's no mechanism to cap costs once an inquiry is called
Feb 8, 2021 12:20 PM By: Erika Engel 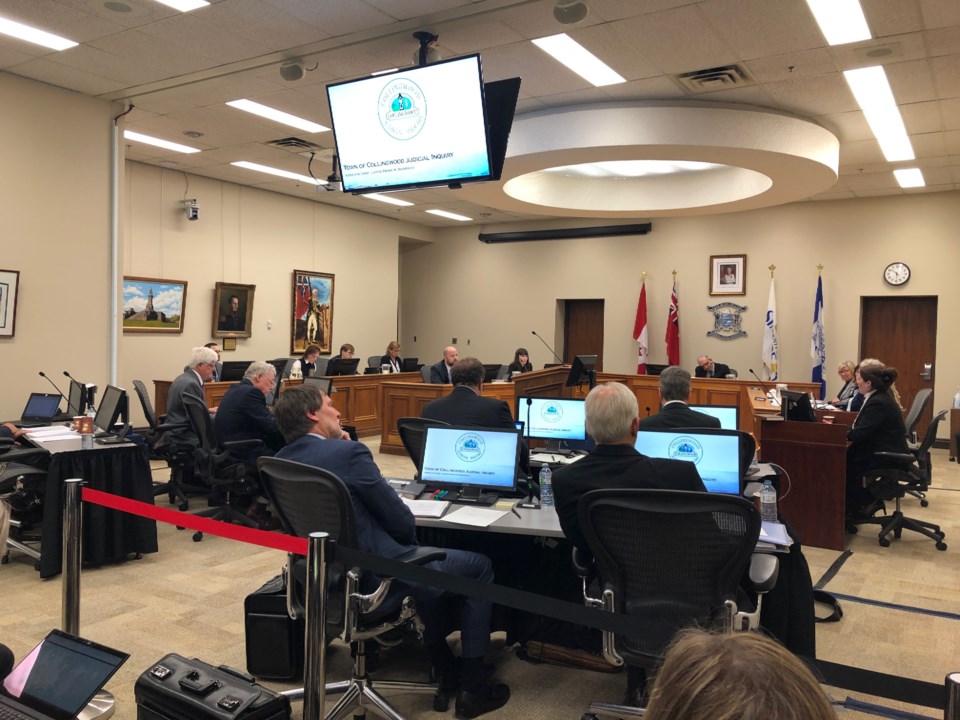 Collingwood council is still fielding questions and criticisms about the more than $8 million cost of the Judicial Inquiry, a cost the town says it could not control or predict.

Council heard from three Collingwood residents who made deputations on Monday, Feb. 1 during a strategic initiatives committee meeting. Two of the three were there to ask specifically how the inquiry has cost more than $8 million after initial estimates suggested it would be between $1 and $1.5 million.

“I want to know how is it possible that the original cost projection … could have been so outrageously and monstrously wrong,” said John Megarry, who has criticized the cost of the inquiry on previous occasions.

He suggested a roads project that cost five times more than the initial projection would result in serious questions and “resignations requested and accepted.”

He asked why council didn’t halt the inquiry when they found out costs had hit $2.3 million in June 2019.

Paul Ireland also presented to council on Feb. 1, and said he supported the reasons behind calling an inquiry, and suggested the estimates at the time were “reasonable.”

“No one seems to know or wants to talk about the costs going out of control,” said Ireland.

He asked about specific expenses listed on the town’s website for amounts paid to local restaurants, and for office space, furniture costs, and consulting firms.

Timothy Fryer, the former chief financial officer for COLLUS, a participant in the Collingwood Judicial Inquiry, and a town councillor from 2014 to 2018, also made a presentation to council, one of several he’s made verbally or in writing since the inquiry report came out in November.

Fryer suggested the costs incurred by other participants in the inquiry, but not paid for by the town, should also be included in the total price listed by the town.

Former town treasurer Marjory Leonard attended the virtual meeting on Feb. 1 and explained the town had little to no mechanism to control costs once the inquiry was called and the scope assigned by council.

She said town staff received a letter on April 6, 2018, naming Associate Chief Justice Frank Marrocco as the commissioner of the inquiry and referring the town to a report prepared for the Mississauga Judicial Inquiry, which took place in 2011 at a cost of about $7 million. The Mississauga inquiry dealt with conflict-of-interest matters.

The letter also explained the town could request “proportionality,” meaning the cost of the inquiry should be proportionate to the amount of funds involved in the transactions being investigated.

“I know CAO [Fareed] Amin did do this,” said Leonard. “Once you start the judicial inquiry, you have no way out of it until the end. It’s the justice and the commission counsel that actually determine the direction of any questions and any investigations.”

Councillor Kathy Jeffery said council and staff did an ‘in-depth’ review when setting the scope of the inquiry with a mind to keep the costs as minimal as possible.

Hearings for the Collingwood inquiry began on April 15. At that time, the inquiry had scheduled all three phases of the inquiry hearings to take place between April and June.

“This went on longer than scheduled … the fact is, this is an extremely complicated and complex manipulation and victimization of our community … it will cost us $20 to $30 million by the time we get down to talking about our next recreation facility,” said Saunderson. “Unfortunately it was an investment we had to make.”

He noted the town’s annual budget is nearly $100 million, and the inquiry costs amount to less than ten per cent of the yearly budget.

Costs for the inquiry have been paid from town reserves, which will be replenished through future annual budgeting processes, according to a statement on the town’s website.

Councillor Yvonne Hamlin said the cost of the Collingwood inquiry is, in part, the fault of the province for a lack of legislation supporting a municipality when it comes to calling a judicial inquiry.

“This is the failure of successive provincial governments to address the municipality’s needs in holding judicial inquiries, a lack of guidance,” she said, noting there are more rules for the province’s version of an inquiry – called a public inquiry – including rules to curb the cost and timespan.

“One of the rules is that they can set the budget for the commission and a timeline for completion,” said Hamlin. “Where is that in our rules? There’s nothing. But if the province is paying, they can do that.”

Hamlin said she’d also like to see the province be accountable for legislation that hasn’t been updated despite past judicial inquiries on procurement and conflict of interest.

The largest portion of Justice Marrocco’s recommendations from the Collingwood Inquiry were suggestions for updated or new procurement policy and practices.

“We should make a submission to the province to say you’ve put us in a box,” said Hamlin. “You’ve given us no tools to set a budget, set a timeline, set maximum fees for lawyers. You have given us no direction on procurement policies where this has been a continuing issue. You’ve not amended the Municipal Conflict of Interest Act in so many ways that would have benefitted us. Don’t make another municipality go through this.”

You can watch the council meeting and deputations archived on the town’s YouTube channel.