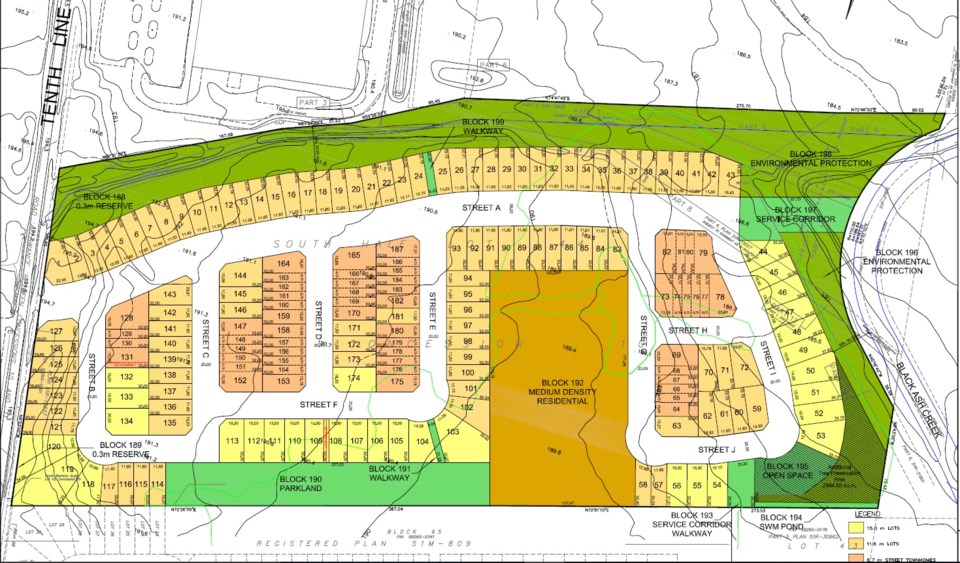 The purchasers of new homes in a Tenth Line subdivision that has been held in limbo for nearly nine years will have to keep waiting to see their homes built.

An update on the Red Maple subdivision, slated to be erected at 725 Tenth Line in Collingwood, was presented at the Development and Operations Services Standing Committee on Monday night. The staff report recommended that council extend the draft approval for the subdivision for three more years.

Deputy Mayor Keith Hull asked why this application, which originally came before council in June 2010 for its original approvals, has taken so long despite the first phase selling out so many years ago.

“I think there’s been some frustration expressed to me as well as, I'm sure, other members of council as to the delays specific to this subdivision,” he said. “Could the director just provide a timeline as to why there have been delays, as well as a rationale for three years as opposed to a shorter time?”

Director of Planning Services Nancy Farrer indicated that the delay boils down to the cost of a reservoir.

“The reason that this has taken so long, is that this development really can’t start until there’s a reservoir (built). It’s going to be built at the corner of Sixth Line and Stewart Road,” she said. “That reservoir is needed for there to be an adequate water supply for this development, (and) is a very expensive piece of infrastructure.”

Farrer said that initially the plan was for two or three developers to share the cost of the reservoir.

“It looks like one of those developers has, as far as I know, backed out at this point in time,” she said. “We’re waiting for the other two developers to come up with the money. I think it’s about $6 million in order to build that reservoir. We do not have that kind of money in the bank.”

“Frankly, until we get the developers who are prepared to pay for that reservoir, this development will not be proceeding. That’s the reason it’s been held up. Someone is going to have to write a very large cheque.”

Farrer conceded that the planning department had received many phone calls over the years asking when the development would proceed, but that the fate of it is in the developers’ hands at this point.

“They’ve asked for three years to make sure they get this all done and settled. We do hope it proceeds sooner than that, but I can’t guarantee that,” she concluded.

The Red Maple subdivision draft plan includes 278 units, broken down into 131 single detached homes, 56 freehold townhouses, and 91 condominium townhouses. According to the staff report, there are no impacts to town finances to grant the extension as costs are covered as part of the application fee.

The Development and Operations Services Standing Committee supported the recommendation. It will be discussed at the next meeting of council.

COVID-19: Tips for navigating children’s screen time during social distancing
Mar 31, 2020 7:15 PM
Comments
We welcome your feedback and encourage you to share your thoughts on this story. We ask that you be respectful of others and their points of view, refrain from personal attacks and stay on topic. To learn about our commenting policies and how we moderate, please read our Community Guidelines.