Council, in a 4-3 vote, passed a new procedure to have council members and staff correct correspondence items during council meetings if a councillor flags them as 'factually incorrect'
Feb 20, 2021 2:30 PM By: Erika Engel 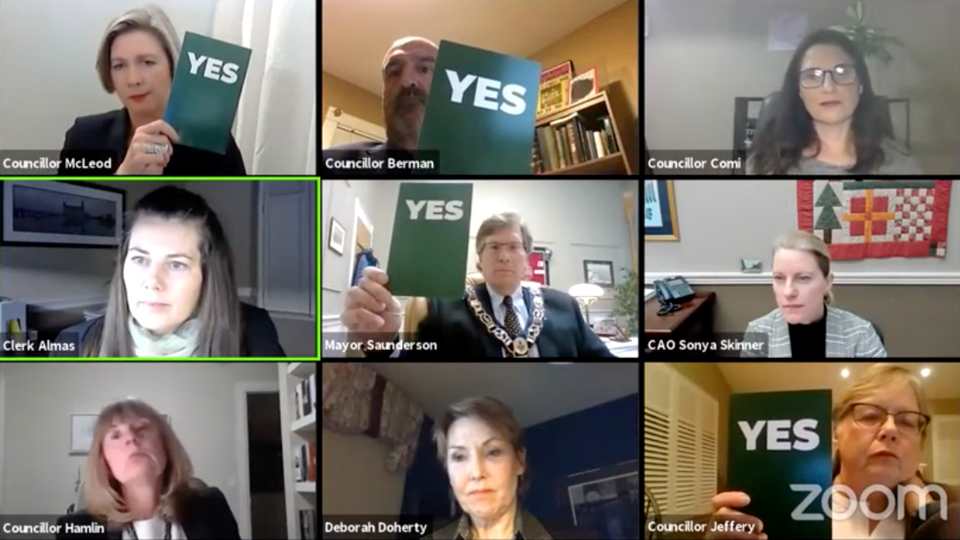 Your next official correspondence to council, if it’s for a meeting agenda, could be publicly fact-checked and corrected by a vote.

A new policy implemented by the town at the order of council (though it was not unanimous) states that members of council can bring forward motions to correct information included in the correspondence section of the agenda.

In a 4-3 vote of council, the policy passed on Tuesday, Feb. 16. It was brought forward by Coun. Steve Berman who said he wanted to find a way to deal with “false information about numbers and procedures.”

But three councillors said the new policy goes in the wrong direction, with one suggesting it would amount to public shaming.

“What kind of council are we, I ask myself, if we’re going to be nitpicking our residents who take the time and effort to write to us,” said Coun. Yvonne Hamlin. “To my mind, that’s not representing the public. That’s attacking the public.”

Berman, however, disagreed, suggesting his idea was to depoliticize the matter.

“All I wanted to do is our small part … to stop the spread of misinformation,” he said.

Berman first raised the issue after letters to town council critical of spending and a perceived lack of public input on the Collingwood Judicial Inquiry stated the town had spent $10 million on the inquiry, when the town’s website stated the total amount was closer to $8 million.

Berman said he had already been thinking about the issue after seeing the riots at the U.S. Capitol in early January.

Recently, the town added a disclaimer to meeting agendas noting that the information and opinions in the correspondence included on agendas are that of the authors and have not been verified or approved as correct.

“I don’t think it’s enough to have a general disclaimer,” he said during the Feb. 16 meeting. “People can write anything they want, I welcome letters … it’s just when what they’ve posted is incorrect based on the data staff have already posted on the website, I would like that to be corrected because it’s part of the permanent record.”

If council members notice something included in the correspondence that has to do with decisions of the town, records, or information and is ‘factually incorrect’ they can raise it with staff and have it corrected through a vote of council at the meeting, thereby altering the permanent record of the correspondence.

If staff confirm the information is inaccurate, according to the motion passed by council, the councillor who flagged it can raise the matter during the public council meeting and have council vote to include a “clarification” with the “corrected information” included. This would be included in the meeting minutes because it is an official direction of council.

Coun. Tina Comi was one of the three (with Hamlin and Coun. Deb Doherty) council members present at the meeting who voted against the new policy.

“This reads like a procedural burden,” said Comi. “This motion will discourage participation and create undue burden … I fear (the public) will hesitate to come forward for fear of being called out in a public forum.”

Comi said the new plan was a “concerning trajectory away from public input.”

Hamlin stated the disclaimer added to the agenda was sufficient.

“Most of our residents, they’re just writing because they have something they want to say … some because they’re upset and they are close to matters,” she said. “Do we add to public shaming and blaming of the resident who got the facts wrong, when in fact if someone read the letter a little closer, they may have got an idea of what the problem was and it had nothing to do with the facts that are incorrect.”

Doherty agreed with both Comi and Hamlin’s comments on the matter.

“I do certainly appreciate the sentiment under which this motion has been brought forward, but I just don’t believe this is the tool to address it,” said Doherty.

Berman said Comi, Hamlin, and Doherty were missing his point.

“I felt like some of my colleagues didn’t understand what the motion was,” he said, reiterating he didn’t want to discourage anyone from writing to council.

Coun. Kathy Jeffery, who seconded Berman’s motion, said the discussion took the matter out of context.

“I don’t think it happens all that often, but I think the examples we’ve seen in the past couple of months are cause for concern,” said Jeffery. “I don’t think we would be harsh.”

She suggested council should be looking for things that might be “detrimental to the greater public.”

“The public we’re serving are not just those writing letters,” she said.