Rainbow Club of South Georgian Bay hosting festival, which will run from July 17 to 19 in Collingwood’s downtown
Jan 23, 2020 3:00 PM By: Jessica Owen 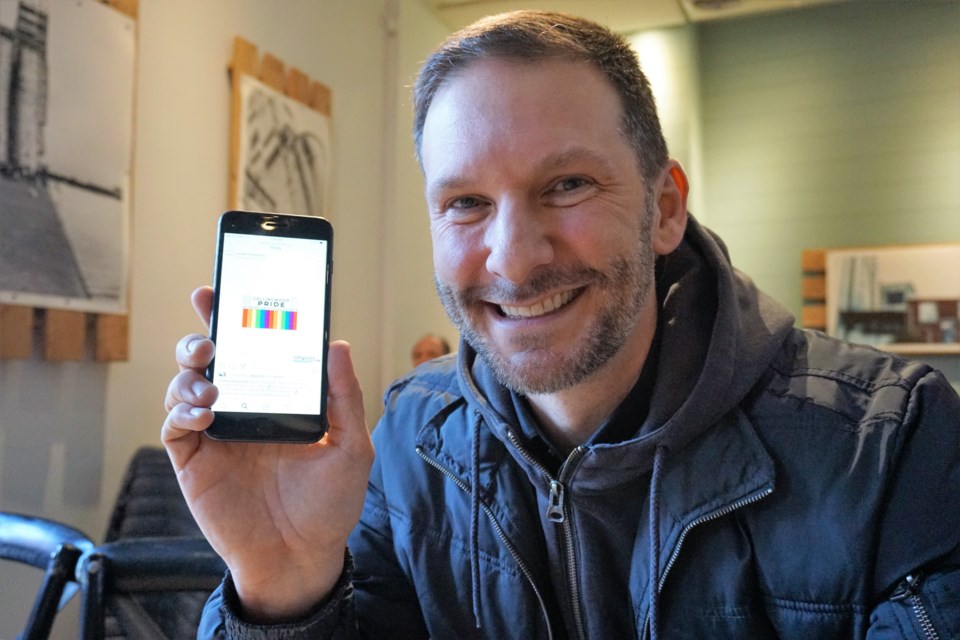 Andrew Siegwart, co-founder of the Rainbow Club of South Georgian Bay and one of the event organizers for Collingwood Pride, shows off one of the logos designed for the festivities of rainbow Terminals. Jessica Owen/CollingwoodToday

This summer, Collingwood will get its first Pride festival.

The Rainbow Club of South Georgian Bay is gearing up to host its first-ever Collingwood Pride Festival this summer from July 17 to 19.

“We’ve done smaller, community-based events before, but this is, by far, the largest event we’ve done,” said Andrew Siegwart, co-founder of the Rainbow Club of South Georgian Bay and one of the event organizers.

While Siegwart said some of the permitting is still going through the proper channels, the tentative schedule will see a Pride march taking place on July 17 through Collingwood’s downtown to kick off festivities.

On July 18, there will be a Pride run hosted by 365 Sports and a Pride street festival, also in the downtown with street vendors, entertainment and panel discussions at the Simcoe Street Theatre.

The festival will wrap up on July 19 with an afternoon event. Further details on each day’s festivities will be released once they are finalized.

Siegwart said part of the preparation for the festivities will include free training for any local businesses who would like to make their spaces more inclusive to members of the LGBTQ+ community in advance through the club’s Safer Spaces program.

“The merchants can be prepared on how to best serve the community, but also so they can best leverage it from an economic perspective,” he said.

Siegwart came to South Georgian Bay about four years ago from Toronto.

“To be honest with you, it wasn’t until I started to connect with the Rainbow Club and members of the LGBTQ community, that I started to get a sense that this community was just like any other,” he said.

“I lived in Toronto for a while and I’ve been out for 20-something years. Moving to rural Ontario, you kind of have an expectation of how it’s going to be,” said Siegwart. “It was hard to integrate before I found the LGBTQ community. It was hard to consider this place home until I found my tribe, so to speak.”

Siegwart said the festival can be an opportunity for families and friends to learn more about the LGBTQ+ community.

“Pride events are also educational. When I went to my first Pride event in Toronto, I actually went with my parents,” said Siegwart, with a laugh. “It was a really interesting experience because they got to see the whole spectrum of the community.”

“When you’re younger and just coming out and you don’t have a lot of resources, sometimes something like a Pride event just gives you that outlet and place,” he said.

The festivities will also include family-friendly spaces so parents are encouraged to bring their kids.

“It’s a message about inclusivity above everything else. While we’re planning this event, it’s really important to us that it’s Collingwood’s Pride Festival, and it’s for everyone. There’s so much division in the world and we’re hoping this will be a place where everyone can come together,” said Siegwart.

“In this community where we need talent, we need labour force due to a major labour shortage, we need to recruit young people,” he said. “Our community needs to do things like Pride festivals to demonstrate to folks who are in the cities who might want to get out of that rat race and have a different lifestyle, that they can be their true, authentic selves in a place like Collingwood.”

Siegwart said the committee overseeing planning is still looking for more corporate sponsorships and volunteers. For more information or to apply, click here.