'Reduced material sales and increased processing costs have resulted in a $2 million impact to the county in just two years,' official says
Dec 8, 2019 8:00 AM By: Miriam King 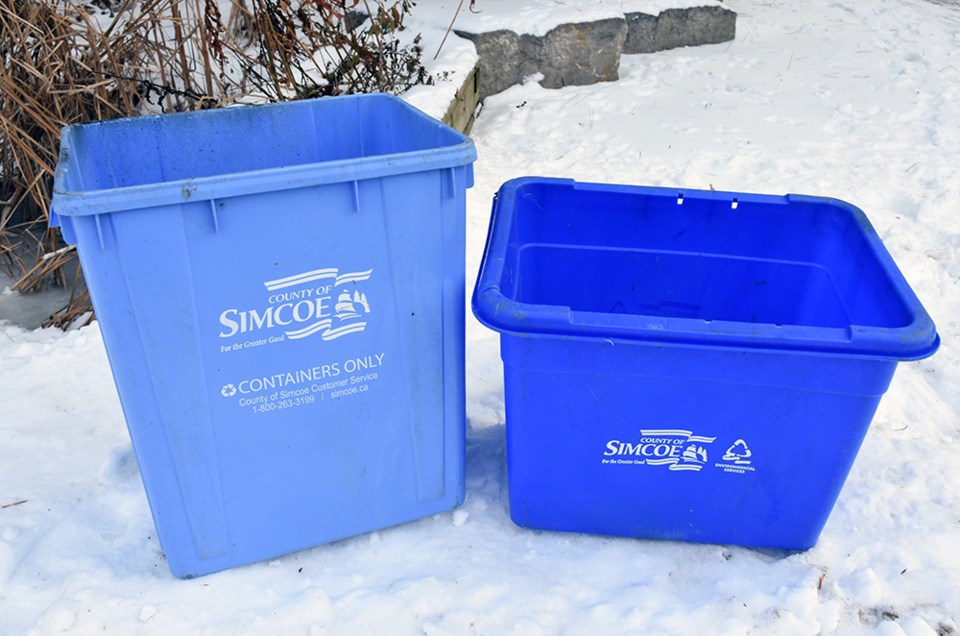 Ontario is the birthplace of Blue Box recycling – the program of curbside collection of paper, plastics, glass and metal food containers, for recycling purposes.

It was back in 1981 that the recycling pilot project was introduced in Kitchener – a project designed to divert waste from landfills, which at the time were rapidly being filled, and discover new markets for the diverted materials.

Now the question is, is it time for a revamp of the program?

Finding markets for recyclables, and the issue of contamination and “wishful recycling” by householders throwing inappropriate items into their blue boxes, pose challenges.

Those challenges were made more acute when China, the largest overseas market for recycled materials, passed its National Sword Policy in 2018, setting tough new contamination standards, and banning a number of ‘recyclables’ – including certain plastics, and mixed paper.

The result, according to recent news stories, has been that some materials collected for recycling in North America have ended up in landfills.

Rob McCullough, Director of Solid Waste Management with the County of Simcoe, wanted to assure residents that that has not been the case in the county, which adopted Blue Box recycling of newsprint, paper, cardboard, metal food containers and glass in the 1980s.

“We have been assured by our processor (Canada Fibres) that they have markets for the materials allowed in our recycling programs,” McCullough said.

The county only accepts materials for which there is a proven North American market, he noted.

“Many communities have added items such as polystyrene (Styrofoam) and film plastic (shopping bags) to their programs. We have not,” he explained. “These two items are significantly difficult to market now, due to the China National Sword Policy, and overseas markets for these items (have) caused numerous issues.”

McCullough noted, “The recycling markets have crashed world-wide, due most specifically to the China National Sword policy.”

He acknowledged that where markets have declined, as for mixed paper, the county pays for the recycling – and the impact has been huge.

“Reduced material sales and increased processing costs have resulted in a $2 million impact to the county in just two years,” he said.

Even so, McCullough insisted, “We are unaware of any instance where our materials, that are acceptable in our Blue Box Program, have ended up in a landfill site.”

The county no longer accepts black plastics in its Blue Box Program – not because the plastics can’t be recycled, but because “the automated sorters have difficulty differentiating them from the black conveyor belts used in the operation,” he said.

But what about contamination, when inappropriate materials are mixed in with the recyclables? Items like greasy pizza boxes, and other trash?

“Contamination is an issue in every recycling program,” McCullough admitted. “We do audits of Blue Box material monthly with our processor, and find on average that the contamination rate… varies in the 10 to 15 percent range.”

While Blue Box Recycling remains “environmentally sustainable,” its economic viability is another matter. With costs associated with recycling soaring, the Ontario government is revising its approach.

Back in 1986, Ontario Multi-Material Recycling Inc. (OMMRI), a coalition of beverage companies, suppliers and packagers, was founded to provide technical support and cover 30 percent of the cost of the program; the province and the municipalities covered the other two-thirds.

“This past summer, we announced the next steps for improving the Blue Box Program and transitioning the costs away from municipal taxpayers, to make the producers of products and packaging responsible, starting in 2023,” said Andrew Buttigieg, Press Secretary to the Ontario Minister of the Environment, Conservation and Parks Jeff Yurek.

As part of the new Made-in-Ontario Environmental Plan, those producers will be asked to cover 100 percent of the cost of recycling the waste they produce.

“The first group of municipalities or First Nations will transfer responsibility of their Blue Box programs to producers starting Jan. 1, 2023. By Dec. 31, 2025, producers will be fully responsible for providing blue box services, province-wide,” Buttigieg said.

The province plans to hold consultations over the coming year, to develop a new “producer responsibility model,” and last month established working groups to provide input, and “ensure the Blue Box Program is affordable for producers and right for municipalities and Indigenous communities,” he said.

The County of Simcoe is participating in the talks, and supports the shift to the new model, although McCullough noted, “Just exactly how this will work out and when it will be implemented is continuing to evolve.”

In the meantime, he said, it will be business as usual – encouraging residents to fill their Blue Boxes with acceptable materials.

“Residents who currently receive municipal Blue Box services will continue to receive the same services throughout the transition period,” confirmed Buttigieg. “Once producers are fully responsible for the program, Ontarians will experience the same or improved access to blue box services across Ontario.”

The province estimates that for every 1,000 tonnes of waste diverted from landfill, seven full-time jobs, $360,000 in wages and another $700,000 in gross domestic product are generated.

“It is clear we need to divert a much wider range of materials from the waste stream – turning them into resources instead. And we need to make it easier for the people of Ontario to play their part in diverting and recycling,” said Buttigieg.

“This is not the end of the Blue Box, but a transition to a new phase that will support innovation and improve diversion rates.”