Nearly 60 per cent of $7.7-M inquiry bill is for legal costs 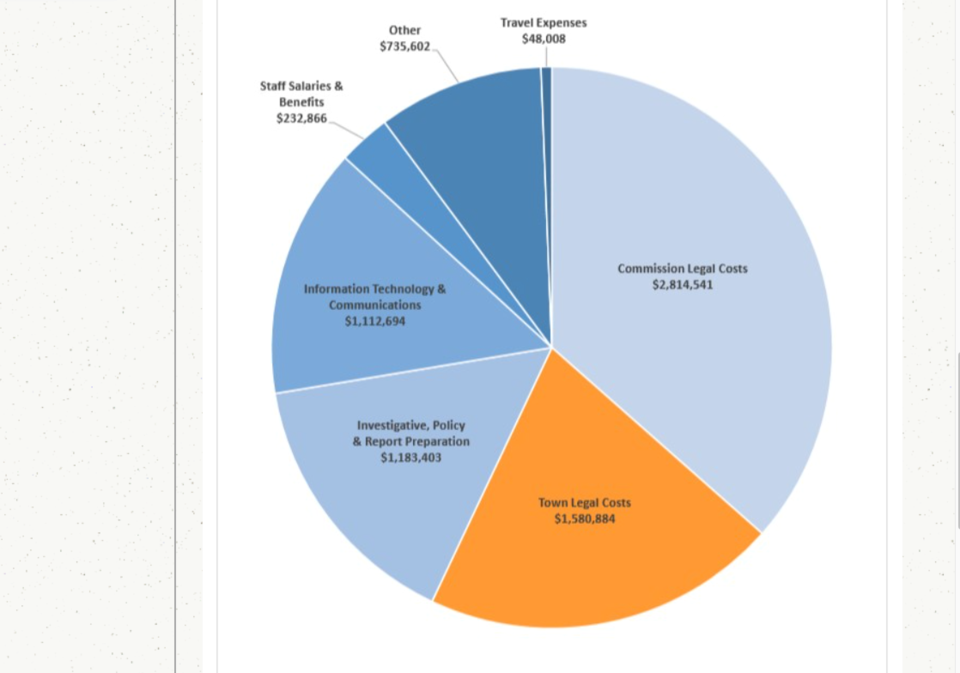 A breakdown of the costs paid by the Town of Collingwood for the Collingwood Judicial Inquiry. Screen capture from collingwood.ca.

Update: The town has provided a breakdown of the costs labelled "other". The breakdown has been added to the story.

Though the final tallies are not yet calculated, the Town of Collingwood has spent $7,707,998 on the judicial inquiry.

According to a general breakdown of inquiry costs posted to the town’s website, 57 per cent of the total money spent on the inquiry so far was for legal costs.

The next two highest figures include $1.1 million for information technology and communication, and $1.18 million for investigative, policy and report preparation.

According to town staff, those expenses include:

Staff salaries and benefits associated with the inquiry amount to $232,866 and travel expenses have totalled $48,008.

The town has paid the costs of the inquiry so far through reserve funds and any available funds in the existing budgets.

According to the town website, “all costs to date have been paid.”

Reserve funds depleted this year would have to be replenished in future town budgets.

The Collingwood Judicial Inquiry was ordered by council in February 2018. At that time, town officials estimated it would cost $1.6 million.

By December, the inquiry commissioner and legal team estimated the public hearings would take place over five weeks in April and May 2019, and the final policy hearings would be conducted over three days in June.

However, the hearings took place over 61 days and included 57 witnesses resulting in 18,000 pages of transcripts, which was reviewed and analyzed by the inquiry.

There were also “in excess” of 440,000 documents collected for the inquiry’s investigation, according to Associate Chief Justice Frank Marrocco, the commissioner for Collingwood’s inquiry.

Once a public inquiry is called and the scope established by the council that called it, the investigation is independent and spending cannot be mandated or regulated by the town.

“The task is to determine how and why a problem occurred and recommend how a town can prevent similar occurrences in the future,” stated Marrocco on Monday when he released his report.

Collingwood council asked the inquiry to investigate two things. First, the sale of 50 per cent of the town’s electrical utility (Collus Power) to PowerStream in 2012. The town received $8 million cash for the shares.

The second request from council to the inquiry was to investigate the way the town spent the proceeds of the Collus share sale to build fabric membrane structures for the Centennial Aquatic Centre and Central Park Arena.

Commissioner Marrocco released his full report on Monday. It is 914 pages long and contains 306 recommendations for the town and province. You can get a copy of the full report from the inquiry website here.

More than half of inquiry recommendations complete or nearly complete, says town official
Nov 5, 2020 9:11 AM
Comments