Over-eager, aggressive photographers can be the death knell for these beautiful birds, says outdoors columnist
Jan 12, 2020 11:00 AM By: David Hawke 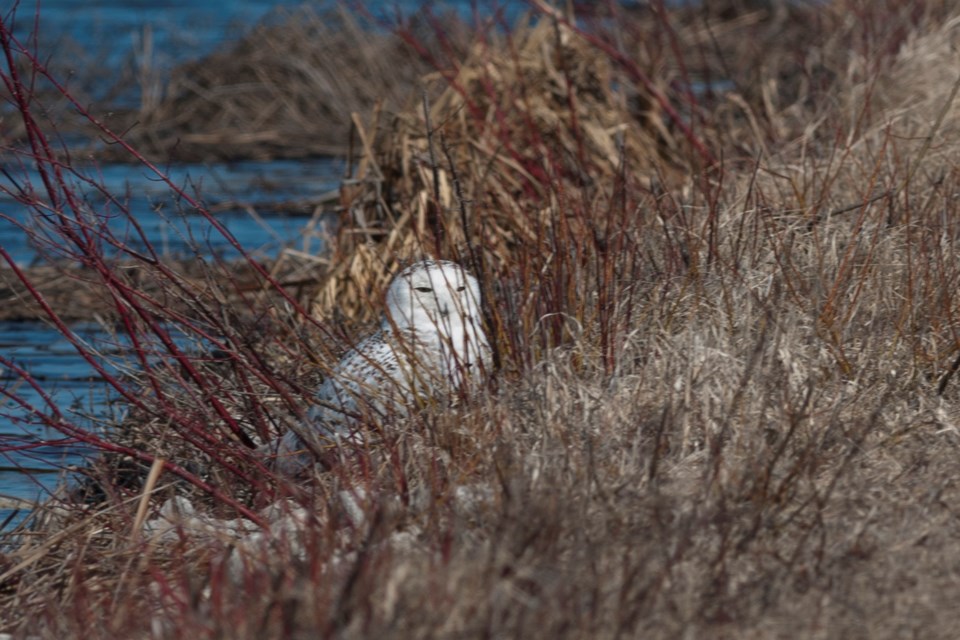 This snowy owl was photographed in the Tiny Marsh. David Hawke/OrilliaMatters

The provincial bird emblem for Quebec is the snowy owl, and there are a number of them hanging around southern Ontario this winter.

That's okay for them to be here, as 'our' provincial icon, the common loon, frequents La Belle Province quite a bit in the summer months. Bit of a trade off.

To observe a snowy owl is to experience a moment of excitement as owls in general are hard to find, and this one is so unique with its almost pure white plumage.

As these owls like to hang out in wide-open areas they can be found atop telephone poles, the roof of a farm building or sometimes just sitting in the middle of a hayfield.

They are in our southern region only during the winter months, having flown down from the sub-Arctic plains. During the brief period that plants grow and lemmings can be found scurrying in the open, the snowy owls build a nest on the ground and raise their two owlets. Incubation is done by the female while food gathering is a shared chore.

The slightly larger female snowy owl has several black feathers scattered throughout her body, assisting her with camouflage as she hunkers low on the nest; eggs and small chicks are on the menu of ravens and arctic foxes.

The males tend to be almost pure white with the thought being that this helps him to camouflage with the remnants of melting snow as he hunts for small rodents.

If the food supply is low, as often and usually happens in this harsh environment, only one chick will be fed.

This lack of food has, for many years, been the explanation as to why we see snowy owls coming south in high numbers every four to five years: if the lemmings are in a low population cycle the hungry owls keep searching southwards for more abundant meadow voles and cottontail rabbits. However... not true!

Recently it has been noted that we see this irruption of owls during years of high food availability. Lots of food means lots of survival of the chicks, and lots of young owls tend to wander and explore new territory.

That's our cue to drive the back roads with car passengers outfitted with binoculars, telescopes and cameras with big lens poking out the windows.

I do not know of what the Indigenous peoples thought when encountering a large pure white bird in the dead of winter, but the European folks who were settling into the region had a plan... shoot 'em and stuff 'em.

In the late 1800s and well into the 1940s it was a busy time for taxidermists to stuff and pose a snowy owl carcass that would do the parlor room proud with its appearance.

In the fabulous book Birds of Simcoe County by O.E. Devitt there is the following remarks under snowy owl: "Such an invasion occurred during the winter of 1930-31, when snowy owls were reported shot at Barrie in November, December and January and at Orillia in January 1931. .. Specimens for the R.O. M. were secured [shot] on November 1, 1941 at Wasaga Beach and Shanty Bay."

Times and fads have changed, somewhat for the better, as it is now illegal to shoot an owl, even if it's to add to the collection of a prestigious museum. But the visiting owls are still persecuted, again by 'trophy hunters', this time wielding not shotguns but telephoto lenses and snowshoes.

The owls that make it this far south are hungry, as it's been awhile since the abundant lemmings and voles of the home turf have been caught.

Yes, we have meadow voles and other small rodents in abundance down here, but that thick layer of snow makes for tough hunting.

By sitting very still and listening very hard, the owls can actually hear the mice tunneling through the snow below; there have been many observations of owls diving into deep snow to emerge with a hapless vole held tightly in its beak.

So here's the problem: these visiting owls are almost on the point of starvation, and have been sitting quietly atop a fence post for a couple hours, waiting and listening intently for something to move.

A car slows to a stop on the nearby road. The owl ignores it as it may have just heard the first movement of a mouse. A person gets out of the car and dons snowshoes (or not, if the snow is not too deep or the person is over-excited).

The owl reluctantly looks away from the almost detected mouse to see a person walking directly towards it, making funny clicking sounds with a little black box held in front of its face.

There is an invisible line of tolerance that all animals have that, once crossed, trips the signal for flight. The owl swoops away and lands on another fence post a hundred metres away.

The photographer presses on, ignoring the shouts of the farmer from the nearby farmhouse to "get the "L" offa my land!"

Another flight and the owl disappears across the concession, landing atop a tree that grows beside the next roadway. Another car stops and a person gets out. This scenario gets played out way too often in areas where snowy owls are found.

There have been many snowy owls that are later found, picked up (literally) and brought to wildlife rehab centres. Some can be brought back from the brink of starvation, many cannot.

I'm a wildlife photographer. I know the temptation to get "just a little bit closer" for that full frame shot of a magnificent snowy owl. I have also seen the preponderance of photographers who roam the back roads hoping to find a snowy or great grey owl 'just sitting there' and if not close enough then engage in the take-a-step take-a-pic routine.

Even the bird watching forums and sightings boards found on the internet have taken to removing exact locations from submitted sightings. To leave the road name, green number location and a GPS coordinate up for general viewing is to invite dozens of eager photographers to swoop in and eventually harass the bird to leave the area.

So yes, it is fun to explore the countryside in search of owls, and if you get lucky, really lucky, and can stop your car right beside an owl then click away. But if the bird decides you are a pain in the neck and flies off... please leave it be.