Camp organizers in limbo unable to predict what programs they'll be allowed to offer by the summer
Apr 8, 2021 8:30 AM By: Jessica Owen 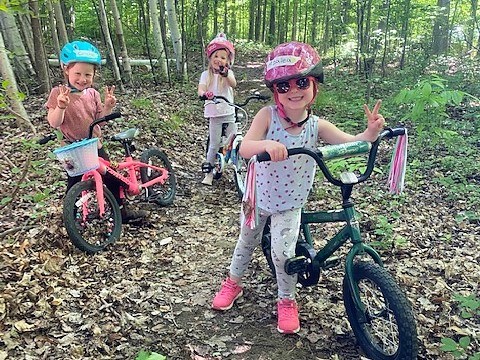 Rad Adventures runs mountain biking day camps across Simcoe and Grey counties, including in Collingwood, Town of the Blue Mountains and Barrie.Contributed image

A week out, Sarah Ley made the difficult decision to cancel The Wildling’s spring break camp.

While April is typically the time families start thinking about registration for summer camp options for their children, COVID-19 and the ever-changing provincial restrictions are making it hard for Collingwood camp operators to make decisions and nail down what their camps will look like this summer.

Ley is the owner and operator of The Wildlings, an outdoor education experience for kids with camps throughout the year. This week, she is sending out a letter to families who had pre-registered for the spring camp, slated to run the week of April 12, to inform them the camp will not proceed as planned due to the province’s shutdown announcement on Thursday of last week.

For anyone who had previously registered their children for her spring camp, Ley said money will be refunded aside from the non-refundable deposit, which instead can be applied toward future camps or programs.

“We can’t refund the deposit because we would go bankrupt. We paid for supplies and staff to prepare and do training,” she said. “We decided to do it this way, because everyone is taking a risk. We don’t know what’s going to happen, but I didn’t want to just take that money from the families, because everyone is struggling.”

Registration for The Wildling’s summer camps is currently open. The day camps ran last summer with multiple small groups that socially distanced to keep numbers down. The camp, which is in its fifth season, takes place at local provincial parks, and is entirely outdoors. Ley said they expect 600 children attend this year.

“The biggest issue I’m finding right now is keeping staff. If they are offered something where they can work through lockdowns, I can’t stop them,” said Ley. “I completely understand why they do that. It’s hard when staff ask me, ‘When are we going to open?’ and I don’t know.”

Ley said her camp has a subsidy program where she applies for grants to help supplement fees for families who can demonstrate financial need.

“A lot of our customers are struggling financially. We do have a sponsorship program, but we can’t help everyone in town. It’s hard calling and talking to families and hearing what they’re all going through,” said Ley. “I’d love to do everything for free but I have to survive as well.”

Brian Shelley, vice president of the YMCA of Simcoe/Muskoka, said this week that preparations are underway for their 2021 summer camp season.

“We are committed to meeting and/or exceeding health and safety protocols set out by public health, and remain optimistic that we will be able to operate this summer dependent on COVID-19 cases in our community,” said Shelley.

“We are looking to launch day-camp registration in the coming weeks and will be sharing program options at that time,” he said.

Laura Gallagher is managing director at Rad Adventures which runs spring and summer mountain biking camps in a variety of locations including Collingwood, Town of the Blue Mountains, Meaford and Barrie. Gallagher said her spring camps were recently pushed back to May due to the provincial shutdown, and registration is currently open for the summer camps, which run from July to August.

“We can socially distance with our camps,” said Gallagher. “Last year we followed the provincial guidelines and had separate cohorts. It was so popular and worked very well.”

Rad Adventures has a full COVID policy for children who attend camp. If programs are disrupted due to COVID-19, they offer a 100 per cent refund less a $15 administrative fee, or a 100 per cent credit to a future program, valid for one year. Children are supervised at a ratio of one coach to eight to 10 children, although Gallagher said many groups have lower ratios.

“The challenge was, we just had to hire extra staff, and we provided a sanitizer station, which was an extra cost. We also had to provide port-a-potties because we couldn’t use public restrooms,” said Gallagher. “It worked quite well once we got rolling and even the kids got used to the extra protocols. At the end, we didn’t even have to remind them.”

“There were around 30 families that deferred their payment from last year to this year so I am working with them to reserve their children’s spots. Once this happens I will open up our registration,” she said. “However, our camp is dependent on Town of Collingwood facilities. We use their pavilion at Sunset Point, all their parks, space at the arena, and swimming at Centennial Pool. Our camp will have to follow the municipality’s COVID-19 restrictions.”

“This makes it really hard to plan for,” she added.

MacDonald said she has had meetings with the town about plans, but that things have changed since the province has shutdown again.

“Everything was a go until this last shutdown. I am hopeful with the vaccine coming, this will be our last shutdown and we can continue moving forward,” said MacDonald.

Dean Collver, executive director of customer and corporate service with the Town of Collingwood, said the town is in contact with the Simcoe Muskoka District Health Unit multiple times a week regarding ever-changing COVID-19 plans and protocols.

“The bottom line is, nobody can predict what’s going to happen at the time when camps want to launch. The caveat for all of us is that it has to be permissible under the regulations provided by the province,” he said.

“We understand the value of camps for health and wellness and helping relieve some of the pressure at home. We’ll do anything we can do when it comes to assisting, but the big challenge is, we don’t know,” said Collver. “We’re all in the same boat hoping that numbers drop and the pandemic comes under control.”

Collver said when it comes to general planning of any events or gatherings, the town has had to rethink preparations over the past year.

“It’s all a game of prediction where nobody – not the province, health unit or municipality – has the power to guarantee accuracy,” he said. “We’re doing the best we can to try and support what we know are really positive and beneficial things for the community. We’re asking for patience as we work together through whatever the next roller coaster ride throws at us.”