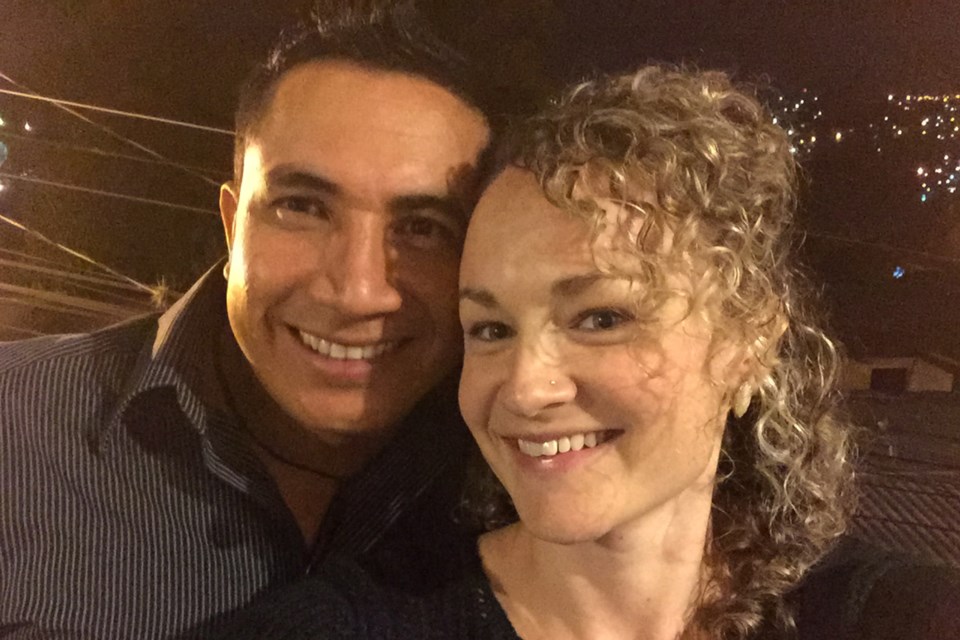 Edwin Espinal and Karen Spring have been together for years. Now she's fighting for his life as he is detained in an overcrowded Honduran jail as a political prisoner. Contributed photo.

Human rights abuses in Honduras are little known and likely rarely discussed at a typical Canadian dinner table, but they are almost all that gets discussed in the Spring family home in Elmvale.

That’s because one of their own - one they love - is sick and alone in an overcrowded and dirty Honduran prison as a political prisoner.

Janet and John Spring own a farm in Elmvale. Their daughter Karen’s partner Edwin Espinal, a Honduran, is languishing in jail, and the family is deep in a battle to free him and others who were wrongfully imprisoned and, they say, are being ill-treated.

Espinal has been tortured, beaten, arrested and had his family terrorized over and over again in the last decade. He is a known member of the National People’s Resistance Front and has taken part in protests against government corruption.

That’s how he met Elmvale native Karen Spring. She started working in Honduras doing research on the effects of open cyanide pools from the mining operations there. She was conducting a study on the health effects of mining and from there she got involved with international human rights organizations. Later, she did her Masters in Public Health on the effects of musculoskeletal disorders in women working in sweatshops. Much of her research for that was also done in Honduras. She’s been in the country on and off since 2009 working for Rights Action.

Karen and Edwin have been a couple for several years. Had he been allowed a visitor’s visa to Canada, they would be married. Karen calls Edwin her partner.

“It’s important that people from Simcoe County and Canada know what’s happening in Honduras because in so many ways, Canadians are part of the problem,” said Karen. “Our government is supporting the Honduran government that is assassinating its people in pro-democracy protests and throwing human rights defenders in jail.”

Honduras has been embattled in political upheaval since a military coup in 2009. Recently, an election fraught with allegations of corruption spurred a mass of protests as hundreds of thousands of Hondurans marched in protest of the government. A state of emergency was declared and the military and police dispersed protesters and imposed a curfew. Several protesters were killed and thousands arrested.

Espinal was arrested on Jan. 19 after an anonymous social media campaign accused him and others of having ties to criminal organizations and drug cartels. At a pre-trial hearing, Espinal was accused of many charges including terrorism. He is being held in a high-security prison called La Tolva with 25 other political prisoners. He spent the first two weeks in solitary confinement, allowed out of his cell for just two hours a day. He remains at La Tolva in “pre-trial detention” indefinitely. He battled a vicious virus about a month ago and has fallen ill again; there is currently an outbreak of TB in the prison.

“The conditions are absolutely horrific,” said Karen’s mother, Janet. “There’s ten men to a cell with one toilet (and) they get two hours of sun per month.”

Prisoners who want to use the phone must buy very expensive phone cards and there’s two telephones for 200 prisoners. There is not enough water in the prison to even wash the dishes; prisoners are given access to water for five minutes per day. There’s no way to know whether that water is sanitary or teeming with bacteria.

In order for a loved one to visit, there’s a mountain of paperwork and a fee of $150 USD. Most of the documents required in the paperwork are not standard documents a family in Honduras would have, so loved ones are not allowed to visit prisoners.

Karen and her family and friends are working around the clock to get Espinal out of the prison.

“We’re demanding Edwin be released and all other political prisoners,” said Janet. “And we demand the Canadian government look into human rights in Honduras.”

Karen is in Canada now, trying to return to Honduras. She will be speaking at an April 8 event, sharing her experience in Honduras and educating the crowd on the human rights issues in the country.

“Since [Canadian] policies in Honduras are causing some of these problems, that means that as Canadians, we can also fix them by demanding our government respect human rights by publicly calling for the release of the political prisoners and my partner, Edwin Espinal,” said Karen.”

Bruce Stanton, the MP for Simcoe-North, has been working with the Springs to get Espinal’s case federal government attention.

“There are pretty serious limits on what [the Canadian government] can do for Mr. Espinal,” said Stanton, noting Espinal is Honduran not Canadian. However, he and the Springs are leveraging the fact that he and Karen would qualify as common-law spouses under Canadian law.

The Spring family and others have formed The Simcoe Country Honduras Rights Monitor, which existed before Espinal was arrested, and fought for human rights in Honduras.

The group is planning a meeting on April 8 at 2 p.m. at the Elmvale Community Hall located at 33 Queen Street. There will be guest speakers including Jeff Monague, a former chief of Beausoleil First Nation, teacher, author and musician; Tyler Shipley, PHD a professor at Humber College and author of a book about Canada’s involvement in Honduras; and Karen Spring.

Anyone is welcome to attend. The group will also be planning a Canadian delegation to Honduras in the hopes of bringing more attention and leverage to their fight to have Espinal and the other political prisoners released.

In 2008, Maurel Zelaya was the democratically elected president of Honduras. He brought protections for the environment and mandated increases in wages. In 2009, there was a military coup and Zelaya was thrown out of office.

By 2013, when the national election for Honduras came around again, the traditionally two-party nation saw new parties in the Anti-corruption party and the Libre party. The new parties were leading the polls, but it was National Party leader Juan Orlando Hernández who was named the winner.

On November 26, 2017, Juan Orlando Hernández was again declared the winner of the Honduras election, but by a narrow margin, and despite an existing law in the country that prohibits a president from seeking more than one term.

The opposition demanded a recount. Weeks later, a recount was done. According to a Reuters article, the vote tally in the recount initially favoured opposition candidate Salvador Nasralla, but it switched to favour Hernández after a 36-hour delay.

The United States government has officially backed the re-election of Hernández.

On January 6, Hondurans marched in protest of the election results. The Globe and Mail reported there were thousands of demonstrators led by opposition leader Salvador Nasralla in San Pedro Sula.

Canada has been mostly quiet about the situation, neither condemning nor congratulating the new government. However, the Canadian government continues to send funds to the government for various projects including some that aim to make the country more financially stable.

Canada’s Minister of Foreign Affairs, Chrystia Freeland, issued a statement Dec. 2 before the votes were recounted, saying Canada was “deeply concerned about reports of escalating tension.”

“Canada also calls for calm and urges all parties to resolve any disagreement peacefully, transparently and in line with the highest democratic and human rights standards,” said Freeland in her statement.

The New Democratic Party of Canada issued a statement Dec. 4 calling on the Canadian government to suspend all political support of the Honduran government until election results can be scrutinized by international observers and declared free and fair.

“Honduras benefits from Canada’s largest bilateral development program in Central America,” reads the NDP statement. “However, New Democrats note that Canada’s relationship with Honduras has for years been overly dominated by trade interests at the expense of human rights.”

Some of Canada’s largest gold mining companies, textile manufacturers and tourism businesses rely heavily on their operations in Honduras for profitability.

Recently, the Office of the United Nations High Commissioner for Human Rights (OHCHR) released a report on the allegations of human rights violations, which took place following the Nov. 26, 2017 election.

“The analysis … reveals that the State’s response to the post-electoral protests led to serious human rights violations,” states the Commissioner’s report. “OHCHR found that elements of the security forces, especially the Military Police of the Public Order and the Army, used excessive force, including lethal force, to control and disperse protests, leading to the killing and wounding of protesters as well as passers-by.”

According to the OHCHR, there were at least 23 people killed between Nov. 26 and Jan. 27.

Of those 23 people, at least 16 of them were shot to death by security forces, including two women and two children. The are at least 60 people reported injured, half by live ammunition.

The Commissioner’s report notes there were mass arrests during the protests and at least 1,351 people were detained between Dec. 1 and 5 for violating curfew.

The report notes there were “credible and consistent” allegations of ill-treatment at the time of arrest and during detention, there were also reports of illegal house raids conducted. There has been a surge in threats and intimidation against journalists, media workers, social and political activists.

“OHCHR observed some of the protests degenerated into violence, with individuals perpetrating acts punishable under the penal code. Some individuals have been prosecuted in this regard,” states the report. “However, by Jan. 27, according to information received no charges have been brought against any member of the security forces in relation to the killings and injuries that occurred during the dispersion of protests.”

There were decrees to establish a state of emergency in Honduras during the protests in December, the government and military used those decrees for mass arrests, holding civilians in military detention centres. Military authorities denied OHCHR access to detention records.

The report concludes with recommendations to the Honduras government and military for electoral reform, restricting the use of military police and the army in law enforcement functions, and allowing peaceful assembly.

Following the release of the report by OHCHR, the Canadian Embassy to Costa Rica, Honduras and Nicaragua released a statement to support the recommendations in the report.

Canada will provide $3 million over five years to support the work of the OHCHR in Honduras.

Collingwood strikes task force for support during and recovery after COVID-19
Mar 31, 2020 4:30 PM
Comments
We welcome your feedback and encourage you to share your thoughts on this story. We ask that you be respectful of others and their points of view, refrain from personal attacks and stay on topic. To learn about our commenting policies and how we moderate, please read our Community Guidelines.