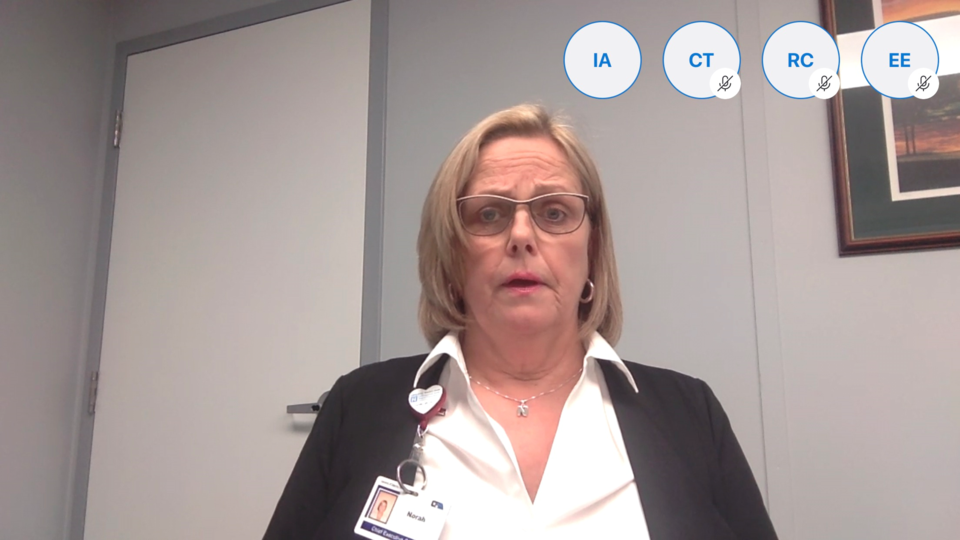 Collingwood General and Marine Hospital CEO and President Norah Holder during a Skype call for a media conference on March 20. Contributed photo

Collingwood General and Marine Hospital (CGMH) has confirmed its first case of COVID-19.

The CEO and President of the hospital, Norah Holder, announced in a media conference today the hospital received the confirmation yesterday.

The man, in his 50s, had travelled out of country and reported to the hospital on March 13. He was told by the hospital to self-isolate at home following his test and did not require further hospitalization.

"The situation is fluid," said Holder. "We anticipate this is only the first ... and more will come."

Holder said staff wore personal protective equipment and isolated the man as soon as he reported to the emergency department. She said the hospital will not be releasing details about existing health conditions or the country the man visited due to patient privacy. It is the health unit's responsibility to follow-up with the man's close contacts.

Simcoe Muskoka District Health Unit reported a total of three new cases today. The other two came from Orillia Soldiers' Memorial Hospital (this will be their second) and Stevenson Memorial Hospital in Alliston (this is their first).

That brings the area total to eight cases, however, that may not reflect how many cases are in the region.

The local health unit as well as provincial and federal officials have stated testing is being done days prior to the results being announced and therefore do not accurately reflect the presence of the virus in the country or in a community.

SMDHU recommends behaving as though everyone has the virus and practicing social distancing and rigorous hand washing.

Yesterday, a coroner confirmed the death of a man at Royal Victoria Regional Health Centre was caused by COVID-19. There was also another COVID-19-related death in the Halton region announced yesterday. That makes two deaths related to the virus in Ontario.

The total number of confirmed cases in Ontario has now reached 308.

In Collingwood, groups of people are reaching out (from a safe distance) to help neighbours and people in need in the community. Their efforts include window scavenger hunts, care packages, and offers to deliver groceries.

Collingwood transit is no longer accepting cash payments and riders are not required to tap their passes. Passengers are also asked to enter and exit via the back door of the bus and to keep their distance from each other and the drivers.

Collingwood Public Library is keeping up its children’s programming with daily videos posted to their Facebook page featuring story times, sing-a-longs, and crafts.

CGMH president and CEO Norah Holder thanked the community for their offers of care packages and food, but explained the hospital was not equipped to receive those. She said virtual notes on the hospital's social media and donations to the CGMH Foundation are welcome at this time.