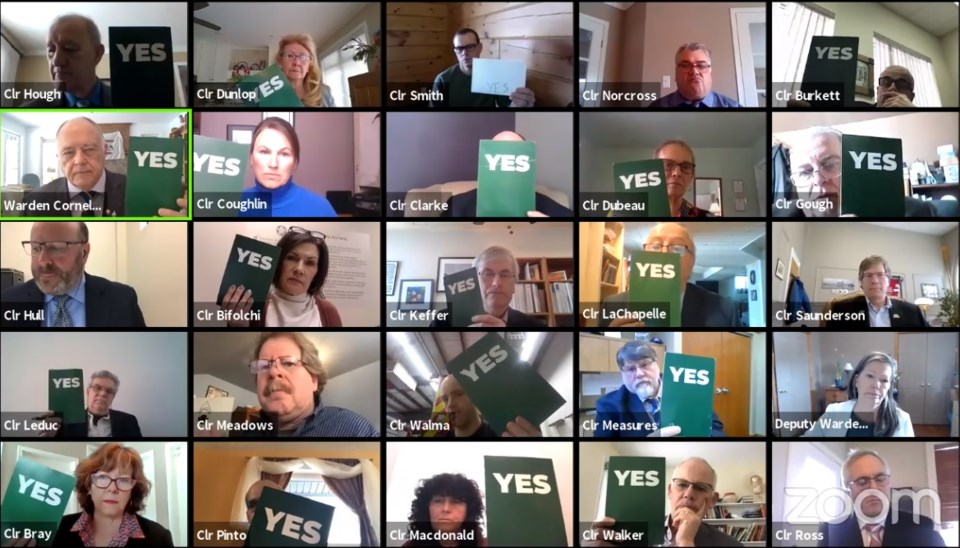 County councillors vote on an amendment to refer the Judicial Inquiry report to county staff to look into the possible financial implications of the recommendations as well as provide legal opinion.Screenshot

The 900-page report from the Collingwood Judicial Inquiry came across the County of Simcoe council table on Tuesday morning, and some councillors had choice words about the findings.

The motion, put forward by Collingwood Mayor Brian Saunderson, asked councillors to support the town in its quest to have the province review and consult on making changes to the Municipal Act and the Municipal Conflict of Interest Act in line with some of the 306 recommendations made by Associate Chief Justice Frank Marrocco in his final report, entitled Transparency and Public Trust: Report of the Collingwood Judicial Inquiry.

“What I’m asking today is that this council support Collingwood in principle... to make sure these changes are made by the province and are explored to tighten up procurement processes and to look at implementing standardized training for municipalities and councillors so these types of issues are brought to the fore before they occur,” said Saunderson.

The Collingwood Judicial Inquiry was ordered by Collingwood’s council in 2018 to investigate the 50 per cent share sale of the town’s electrical utility (COLLUS) to PowerStream and the subsequent spending of the proceeds of the share sale on two Sprung structures to house recreation facilities.

Saunderson started discussions at the county table by laying out the findings of the inquiry.

“Justice Marrocco made many findings that were extremely disturbing and shocking for our community. In the first transaction, the mayor’s brother made $320,000 in consultation fees with Powerstream... as the successful bidder. Through the inquiry, it was found [Powerstream was] privy to confidential information that was discussed in-camera.

“In the second transaction, we discovered the mayor’s brother made $750,000 as an agent for Sprung. These two buildings have cost the town of Collingwood about $14 million and have a lifespan of about 15 to 20 years, so in the next 10-15 years we will be going through the same process,” he said.

“It was found these two transactions were stained by conflicts of interest, manipulation and falsifying staff reports so at the end of the day, council was misled,” said Saunderson.

“Had changes been made to the provincial legislation, I believe some of these issues may have been prevented,” said Saunderson.

Clearview Township Deputy Mayor Barry Burton referenced the size of the report – at more than 900 pages – being a large undertaking for councillors to take on individually.

“Some of the (recommendations) I support, but some I don’t support,” said Burton, opting to put a motion on the table to defer voting on the matter until county staff and legal counsel could provide a staff report on the implications of the recommendations.

“This is a complex legal document and I don’t feel qualified to (vote on it) without getting some legal advice,” he said.

New Tecumseth mayor Floyd Pinto said he was also reluctant to support at this time without legal advice on the financial implications.

“There are a lot of recommendations that could have a lot of implications for smaller municipalities. When I look at this report, I see one municipality’s council who did not follow the rules that were already set out. To me, the rules are very clear on conflicts of interest. To see family members and friends taking part in tenders and bids – that’s a total no-no,” said Pinto.

“I don’t see how the Municipal Act should need to be changed to get more clarity. To me, if you can’t get clarity on getting your family involved in tenders and procurement, then you should not be running for council,” he said.

“To Coun. Pinto’s point: The Municipal Conflict of Interest Act does not prohibit a council member from acting when a sibling is involved in a transaction and is directly benefiting. It’s a major gap in the legislation. (Former Collingwood Mayor Sandra) Cooper had a report and opinion to that effect, so she intentionally did not declare a conflict of interest,” said Saunderson. “We’ve now tightened up our code of conduct, but you shouldn’t have to close the door after the horse is out of the barn.”

Severn Mayor Mike Burkett brought a lack of criminal charges into the discussion.

“To my colleagues, I can appreciate what they’re trying to do, but no criminal charges were laid. We all took an oath to disclose any pecuniary interest,” said Burkett.

“This is a sad chapter for the Town of Collingwood,” said Keith Hull. “If the rules in the Ontario Municipal Act were updated ... we may not have had to go down this path.

“The taxpayers... have now paid more than $8 million for the publication of this document. If we look at Toronto, Mississauga, Waterloo, Walkerton, Collingwood ... the people of Ontario have paid millions of dollars for a piece of legislation that continues to be outdated,” said Hull.

Hull said he was confident that any legal opinion that came back would only support the findings of Justice Marrocco.

“I’m going to have to get a legal opinion, because this is an accountability issue,” said Clarke. “Much of what is in here is overreaching. What we need here is better enforcement.”

Deputy Warden and Innisfil Mayor Lynn Dollin expressed concern about the discussion that took place over the findings.

“One of the things that concerns me about this conversation this morning is that sense of, ‘It couldn’t happen in my municipality,’” she said. “I think the moment we all think that is the moment we’re all in trouble. We always have to be on guard for this kind of activity, particularly in high-growth areas.”

“When one of us is stained, all of us are stained,” she said.

Midland Mayor Stewart Strathearn asked what the county’s legal counsel would be able to further explain beyond what was already addressed in the existing report.

“I really don’t see the point in going back to test the efficacy of the chief justice’s knowledge of the legal (ramifications). I would be interested in knowing what portions of this report and previous reports were implemented or weren’t implemented that might really tighten up situation that would apply to all municipalities,” said Strathearn.

Saunderson spoke after other councillors had a chance to speak.

“This isn’t about us. This is about our taxpayers. This is about putting in place best practices that will proactively prevent the type of incidences that happened in Collingwood,” he said. “We’re trying to move the bar higher for our residents to protect their tax dollars and make sure these types of abuses don’t happen.”

Council voted in favour of an amendment to refer the Judicial Inquiry report to county staff to look into the possible financial implications of the recommendations as well as provide legal opinion to present in a report at a later time. Saunderson and Hull voted against the amendment.

Chief administrative officer Mark Aitken provided a rough timeline of a month and a half before the report would be back at the county table.