Collingwood opts in for retail cannabis 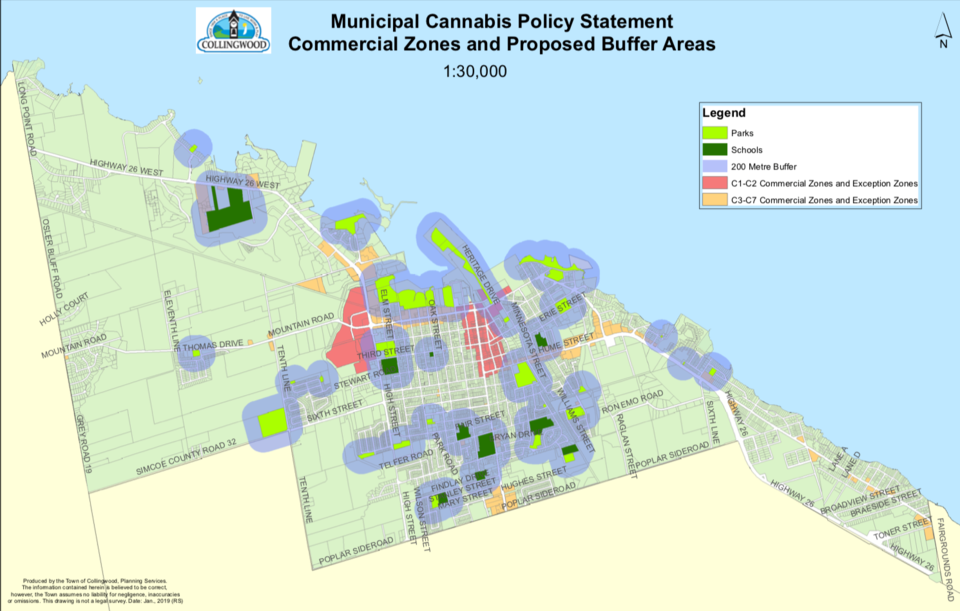 This map, contained in a staff report going to council on Jan. 14, indicates commercial zones (red and yellow) where it might be acceptable to allow recreational cannabis retail stores, and the green zones indicate the presence of a school or park with a blue 200-metre buffer where staff are recommending cannabis retail stores be prohibited. Contributed image

Collingwood council unanimously voted to opt-in to the sale of retail cannabis on Monday night, despite it being unlikely the town will see a store anytime soon.

“Our federal government has decided to make cannabis legal,” said Coun. Yvonne Hamlin. “I believe we have an obligation to make sure that the quality of what’s provided is safe. We will only know that’s happening if we allow a store in our community.”

“Not everyone is able to make online purchases for various reasons,” she said. “I want to get the sale of this product out of the back alleys of our community.”

Coun. Bob Madigan pointed to the overwhelming response to the public survey, which saw 1,400 people express their views on the subject.

“The people have spoken,” he said. “Seventy-seven per cent of the people in Collingwood want it.”

While council did vote in favour of opting in, the provincial government revised the Phase 1 eligibility of cannabis retail stores to exclude towns with populations of less than 50,000 residents, pushing Collingwood out of the running for getting a store during this phase. The dates for Phase 2 have not yet been set.

“I think the vote tonight will be guided by the high level of engagement from the public we’ve received,” said Mayor Brian Saunderson. “This decision... does ensure a safe supply and a safe place of purchase. It also provides us with a funding source because we know the cost for the municipality -- and all municipalities -- will go far beyond just the enforcement.”

“I think this council is making a responsible decision and I’m happy we didn’t make a knee-jerk decision earlier, because I think we would have made a different one if we sat around this table two months ago,” he said.

The report before council also included a draft policy statement suggesting a 200-metre separation distance between a cannabis retail store and areas such as schools, registered day cares, addiction centres, shelters, and playgrounds and parks (not including trails).

Coun. Mariane McLeod asked about what weight the comments submitted by Collingwood council concerning distances from sensitive-use areas will carry with the province.

“Do they have to listen to us when we say that?” she asked.

“I think the short answer is no, but I’ll pass that through to the clerk,” responded Mayor Saunderson.

Clerk Sara Almas indicated that the province was not required to abide by the suggestions put forward by council.

During the meeting Monday night, Coun. Kathy Jeffery brought forward a motion to add the Eddie Bush Memorial Arena as a sensitive area to be added to the list, however it was defeated in a vote of 5-4.

During discussions, CAO Fareed Amin said that a report would be coming to council in the spring regarding new signage.

For more information on this issue and a full story on the report, click here.

Province dashes Collingwood’s cannabis opportunity – for now
Dec 18, 2018 9:30 AM
Comments
We welcome your feedback and encourage you to share your thoughts. We ask that you be respectful of others and their points of view, refrain from personal attacks and stay on topic. To learn about our commenting policies and how we moderate, please read our Community Guidelines.