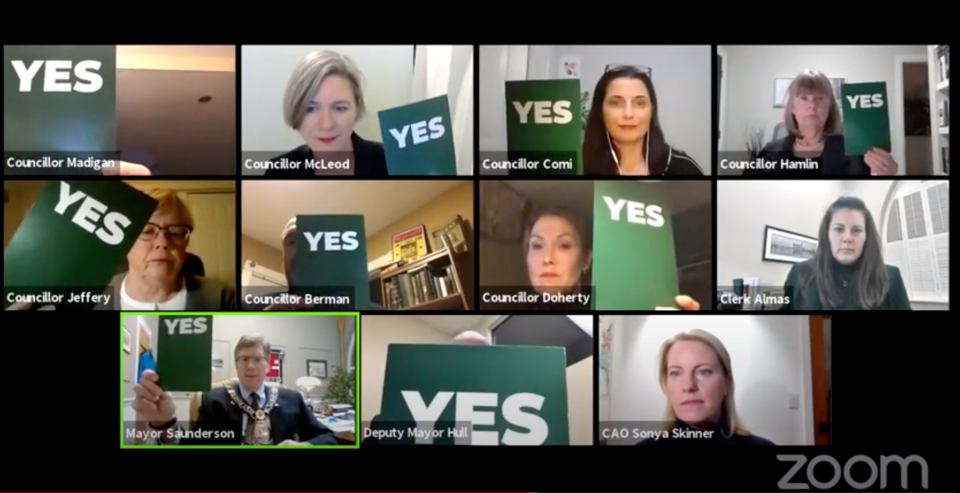 Collingwood council voted unanimously in favour of sending a resolution, letter, and comments from the town's CAO to the province calling on them to repeal the proposed changes to conservation authorities included in the 2020 budget bill. Screen capture

Collingwood council is sending a formal request to the province to drop its proposed changes to conservation authorities as they are currently outlined in Ontario’s draft budget.

“The changes amount to a fundamental alteration of the responsibilities of conservation authorities,” said McLeod, who serves as vice-chair of the Nottawasaga Valley Conservation Authority (NVCA) board. “The changes are hiding in a budget document during a pandemic … We should let the province know it shouldn’t be sneaking stuff into budget bills.”

While McLeod noted she opposes some of the changes proposed, she said it was the process – or lack thereof – from the province that irked her most.

“If the province wants to change conservation authorities, it should do so openly and with public consultations,” she said.

McLeod noted the Town of Collingwood contributes $270,000 per year to the NVCA, while the province contributes $88,000. She reasoned the town should have input given they fund a larger percentage of the authority’s work.

Schedule 6 of the province’s budget bill (229) proposes, among other things, more authority for the Minister of Natural Resources and Forestry. It also does away with the annual funding model in favour of a project-based funding model, requiring conservation authorities to strike agreements with each individual municipality for each project that involves the municipality, from tree planting to children’s programming to water quality management.

The NVCA issued a press release stating the changes included in the Ontario 2020 budget take permitting authority away from conservation authorities and give it to the Minister of Natural Resources and Forestry.

Doug Hevenor, CAO of the NVCA, stated the proposed changes “relinquish our role by taking away our ability to provide science-based input on development applications. It restricts our ability to protect lives and infrastructure here in Ontario.”

Collingwood CAO Sonya Skinner spent part of her career as CAO of Grey Sauble Conservation Authority. She provided her own comments to council at their request, and noted she supported council’s motion calling on the province to repeal the changes.

“I don’t believe the changes that are proposed have been shown to be good for municipalities,” said Skinner. “At minimum, I would like for the province to allow for more time for municipal input.”

The CAO said there were public engagement sessions in the fall, but they were more general, asking for input on what changes, if any, people would like to see to the Conservation Act. Skinner said no such public engagement was held for the “rather large changes” now proposed.

She was struck by the change in the duty of members of a conservation authority to act on behalf of the municipality instead of the watershed.

“The overall intention of conservation authorities is that there is value in a shared approach of managing and monitoring water that precipitates into one watershed,” said Skinner. “You can’t work on the hydraulics of a river just where that river passes through Collingwood or Clearview. You need to look at the whole thing, and we can’t really do that on our own.”

Skinner said the proposed funding model change might mean the town has a lower levy, but the overall cost would likely be higher without sharing resources. There would be memorandums of understanding for each municipality with the conservation authority for everything from tree planting, to environmental education, to water-quality initiatives.

“You can imagine how complex that decision-making would become at the board of directors level,” said Skinner.

She also expected the changes would add cost to developer fees because there would be less sharing of costs across municipalities.

The change of authority from the conservation authority to the Minister of Natural Resources and Forestry had Skinner questioning the level of protection Collingwood might get when it comes to development applications for environmentally-sensitive areas.

While she agreed conservation authorities are not perfect, and she has heard complaints from developers and others with “legitimate concerns” about fees, how long it takes to get an answer from a conservation authority, and the fairness and transparency of those answers, she said change should be made to correct those areas of concern and not by “weakening a water-related authority.”

“If conservation authorities don’t do that work, we may end up being accountable for that at a municipal level,” said Skinner. “I don’t see it is in the best interest of Collingwood … to be accountable for these issues.”

“We owe it to them to support any effort to ensure our protected places are preserved and shielded from bulldozing by ministerial order,” said Doherty.

All of council supported a resolution asking the Ontario government to cancel its proposed changes to the conservation act. The CAO will also be sending comments in a letter to the province.

With files from Jennifer Golletz