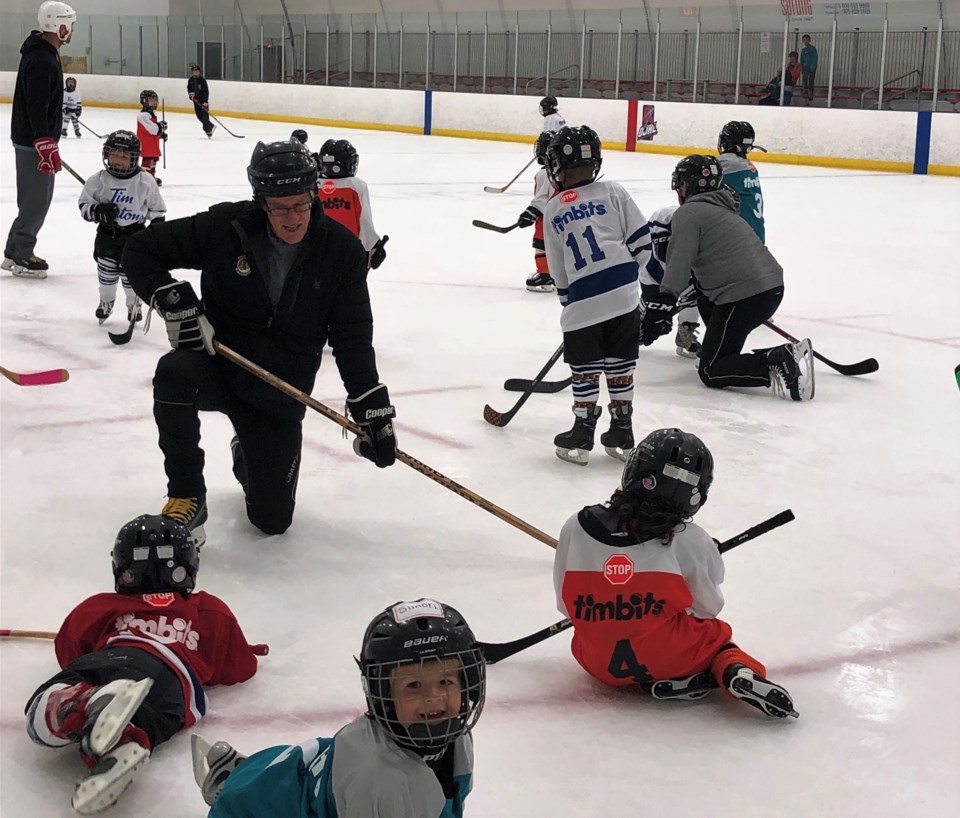 A beloved Collingwood hockey coach is being recognized by the Ontario Minor Hockey Association for more than 20 years of service to the community.

For this week’s edition of People of Collingwood we spoke with Kelly Hastings, 62, long-time hockey coach with the Canadian Hockey Initiation Program (CHIP).

I wanted to get out of the city. I grew up and lived all my life in Toronto.

Q: When did you first get involved in hockey?

A: I played hockey as a kid and pick-up hockey as an adult. As soon as I came to Collingwood, my son wanted to play so I got involved right away. I was on the board of directors and started coaching at that time too.

A: I’ve pretty much coached the same age all the way through. The CHIP is for five and six-year-olds. We used to just put them out on the ice and let them play but it didn’t work. The OMHA directed it and we followed with their program. It’s meant to help kids develop some fundamentals of hockey.

I always liked (working) with that age group. It’s all about fun. I got to meet so many people, as lots of parents came out to help.

After every session, I’d go home with a big grin on my face.

Q: Could you describe your coaching style?

A: I encouraged fun. Kids that get into hockey, they meet new friends and have access to adults that act as mentors. It’s a great sport.

Q: Are there any kids you’ve taught that have gone on to have careers in hockey?

A: Several kids have gone on to the OHA (Ontario Hockey Association), like Junior A. They’ve done quite well.

Q: Do kids ever come back to help out as adults?

A: Oh, definitely. I’ve had kids who are playing junior hockey and come back for the weekend and just come out to say hello. That’s a real treat. That’s part of my motivation to do it.

Q: You were recently awarded the Development Award, one of the Ontario Minor Hockey Association’s top volunteer awards. How did you feel when you received the news?

A: I’ve received a lot of awards in Collingwood; I’m a well-liked person because of what I do. I had spoken with someone on the board of directors and he told me they had put my name in for this.

I thought that (on its own) was a really nice recognition from my peers in town here. However, this was for all of Ontario so there are all kinds of deserving people out there.

When I found out they were giving me this award...it was very humbling.

I didn’t need the recognition. I get all the support I need out of hockey. That was enough, but this was over the top.

Q: You recently retired from coaching. What made you come to that decision?

A: This is the first year I haven’t done it. It was getting time. I was having a hard time hearing the kids.

I’m 62, and I was ending up on the ice every session, getting tripped. I was thinking one of these times I would go down and not be able to get up.

I also had a sick brother in the fall, and he was in the hospital. I was devoting time to that, and I had to reduce my contacts so I could visit him. I couldn’t walk into the hospital after being out with 30 kids.

It was a sad thing, but it was time.

Q: What does the future hold for you? Are you going to still participate in hockey in some way, even if it’s not on the ice?

I have two kids myself and, hopefully, they’re going to produce some grandchildren, so maybe I’d get back into it with them. (laughs)

I like going snowshoeing with my dog, and I do a lot of cycling in the summertime. I’m still working. My wife and I are just hunkering down here in Collingwood, staying safe.