Carving out a life in Collingwood 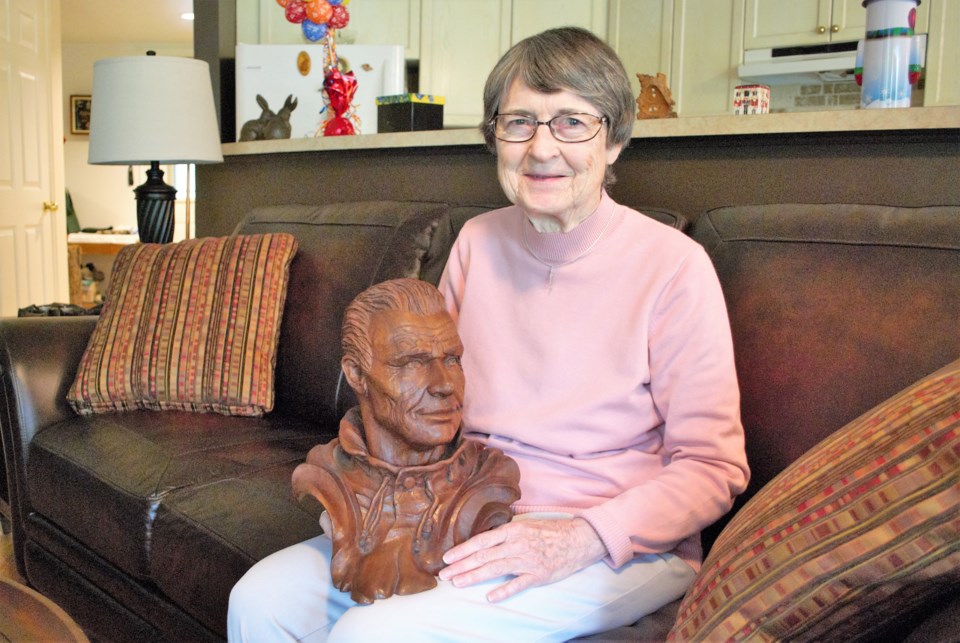 A life-long love of art led to a career in teaching, but a local wood carver has chosen to spend her twilight years returning to a waterfront.

For this week’s edition of People of Collingwood we sat down with Eleanor Burke, 82, a retired teacher and avid wood carver.

A: I was born in Niagara Falls and went to school there.

I went to the Ontario College of Art and Design in Toronto. That was a long time ago. Then, I went to teachers college and learned art education.

Then I got my four-year Honours Bachelor of Fine Arts degree at the University of Guelph. After that I went back to teaching in Etobicoke. I taught fine arts there at the middle school level.

Q: Did you always know you wanted to be a teacher?

When I went to school, I started during the Second World War. It was the mid 1950s when I graduated from high school.

In those days, if you were a girl, you had very few options after high school, because they expected you to get married.

My own father said it’s a waste of time to educate a woman. So, I was not allowed to go to university. In those days, I only had the choice of being a secretary, a nurse, a teacher, a store clerk or an assistant, and that was about it. At the time, I didn’t want to do any of those. (laughs)

My father and mother were both very talented in art. I wanted to do something in art.

In the long run, it all sort of panned out. Eventually I did go to university but I had to save up myself for 10 years before I could go.

Q: The person who nominated you said you’ve done a lot of travel. Where have you been, and why was that important to you?

I’ve been up, down and around and around. (laughs) You name it, I’ve been there.

I think I was probably the gypsy of the family. My father always wanted to go somewhere but he rarely did because he was too cheap.

I was curious. I wanted to see the world. I found out that travel is the best educator. You get the down-to-earth stuff.

Q: When did you retire?

Q: At what point did you come to Collingwood?

A: I retired on a Friday and I was up here Saturday morning. (laughs) You couldn’t see me for dust coming out of Toronto.

Q: What made you decide to settle in Collingwood?

A: I didn’t want to retire in Toronto.

I’m basically a small-town girl. I looked around during my last year of teaching for a place to settle down. The vice principal of the school I was working at had a condo here in Lighthouse Point. It was a one-bedroom.

They were looking for a bigger place, and they wanted to sell the little one. I was the target. (laughs)

She invited me to come spend a weekend up here and I thought wow, this was really nice. Collingwood had everything. I loved the lake, because I was born between two lakes.

I moved in for three years before upsizing. (The one-bedroom) was too small, because I do wood carving.

Q: You won an international award for wood carving. Can you tell me about that?

A: It’s a portrait in black walnut. It’s a friend of mine in Germany who was a sailor. I asked him if I could take some pictures of him to carve. I wanted to do a portrait with a weathered face. He’d been sailing since he was a kid. At the time, he was in his 50s. He said OK. I took the photographs, did some sketches and came back here and carved it.

I subscribe to a wood carving magazine and they hold an international contest. I sent in a photo of the carving, and they seemed to like it.

In my category, which was portraiture, a guy from Russia got first prize, a guy from Norway got second, and I got third. I say, this little old lady from Canada got third. I don’t know how many entries they had. Maybe they only had three. (laughs)

Q: You also spend a lot of time involved in local theatre. Can you tell me about that?

A: I write plays through Gaslight Theatre. I’m in the middle of writing a play right now for this year.

We have a professional playwright who we meet with once in April, May and June. In those three meetings we discuss the theme for the year.

It has to be historic in nature, and of-interest to locals. We get the subject and we start writing little bits and pieces. It’s very helpful.

At the end, there are about eight to 12 of us, and we each have to have a 20-minute play written. The playwright will then choose the four plays they want to present for the Gaslight Tour.

I’ve been doing it for six years, and I’ve had three of my plays chosen.

This year, I’ve chosen the 1903 murder of Glory Whalen as a subject. It’s still a cold case.

Q: You also do a lot of fundraising for the Nottawasaga Lighthouse Preservation Society (NLPS). What makes you want to donate your time toward that cause specifically?

A: Well, I live in Lighthouse Point. Without a lighthouse, what’s the point?

When I moved here in 1995, the lighthouse was still working. I loved to see it at night.

I heard about the NLPS within the last few years. I’d like to see the lighthouse continue and not crumble and fall into the lake.

So I was helping out in their fundraising booths at first. Somebody mentioned to me that someone else in town as collecting used beer bottles and cans and using the money for charity.

I thought that would be a good idea here, especially since there are about 500 condos, and there’s a lot of weekenders and skiers.

About five times a week I check the bins, load up my car and take them to The Beer Store. I’ve been doing that for two years now, and we’re up to $9,400 for the lighthouse.

My car is really stinky, and I am too sometimes. (laugh)

Q: What does the future hold for you? Do you have any future goals?