The proposal was pitched by the town's trails and active transportation committee, which is now working with staff on a budget request and detailed plan for next year
Aug 7, 2020 5:00 PM By: Erika Engel 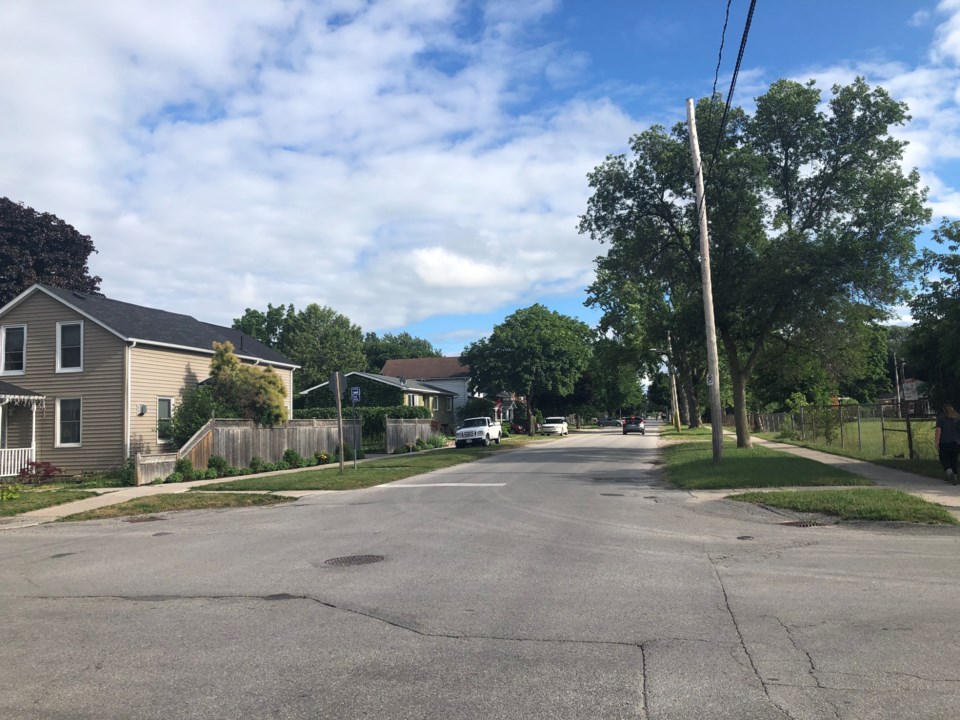 At this intersection (Maple and Fifth Street) the Trails and Active Transportation Committee proposes temporary barricades in the shape of a triangle to force cars to take right turns only when entering and exiting Maple Street. Erika Engel/CollingwoodToday

The town has put the brakes on a proposal to turn Maple Street into a bicycle priority street, wheeling it into next year.

Murray Knowles and Justin Jones, both from the town’s Trails and Active Transportation Advisory Committee, first pitched the idea to council on July 14.

The proposal suggested using barricades and pylons - most of which the town already owned - to discourage through traffic on Maple Streets and encourage only right turning onto Maple Street from intersections.

The barricades would narrow lanes at the intersections on Maple Street from Cameron Street to Third Street on one side of the street allowing emergency vehicles, pedestrians and cyclists to pass through, but “creating friction” for vehicles.

The street would not be closed to vehicular traffic, but it would be harder to drive straight through Maple Street passed intersections.

“This will introduce enough friction to slow traffic, to calm traffic and to reduce the number of vehicles to the point where this becomes an all ages and abilities corridor for people to walk and bike and enjoy the street,” said Jones.

The purpose of the Maple Street bike priority proposal was to create a north-south corridor on the west side of town for active transportation.

The original proposal suggested running a pilot program during late summer and through October, then removing all the barricades for the winter.

Town staff, however, raised concerns around the speed of the proposed project, noting there wasn’t enough time to communicate with residents and consider the impacts.

Council voted at the end of July to push the project to 2021 and have staff bring forward budget implications for the 2021 budget discussions.

Jones said the committee’s goal was to run a one or two month project that used materials already owned by the town.

He estimated the overall costs for materials would be less than $5,000. But that’s not factoring in staff capacity.

For something more permanent, costs would vary.

“For something that would remain on the ground for the longer term as a one-to-two-year pilot project, the estimates I have received indicate that $250,000 would be a sufficient budget for the outreach, design and materials,” said Jones, noting that would not require or involve any major road works along the corridor.

Maple Street has already been identified as a possible bicycle priority street in the town’s 2019 Cycling Master Plan. But the plan included permanent infrastructure – such as bike lanes – and estimated it would take $1.8 million to turn the street into an active transportation corridor.
“We feel the reprioritization of that street would be much cheaper and more effective,” said Jones.

Councillor Mariane McLeod said she is not opposed to the project in principle, but wanted to think it through.

Councillor Deb Doherty said she’s “extremely disappointed” the pilot project didn’t happen this year, but she appreciated staff would need more time to put it together.

“I just encourage staff to try to stay creative,” she said. “Maybe not through such a grand program, but maybe there are pop-up opportunities between now and when we return to school.”

Jones said the trails and active transportation committee does understand the constraints and challenges town staff are facing.

“We did want to see the demonstration project attempted this year,” said Jones. “We’re excited to use the additional time between now and early 2021 to make plans, communicate with residents, gather more examples of best practice and lay out a vision for how Collingwood’s streets can be reimagined to provide less stress, more safety, and better connectivity for all road users.”

For more on the committee’s proposal for a bike priority street, click here.

Former Collingwood grad making political waves nationally
Sep 19, 2020 1:00 PM
Comments
We welcome your feedback and encourage you to share your thoughts. We ask that you be respectful of others and their points of view, refrain from personal attacks and stay on topic. To learn about our commenting policies and how we moderate, please read our Community Guidelines.