In a letter to the region's populace, the medical officer of health again explained his decision to advise lockdown and today's announcement about moving to red zone
Mar 5, 2021 4:26 PM By: Erika Engel 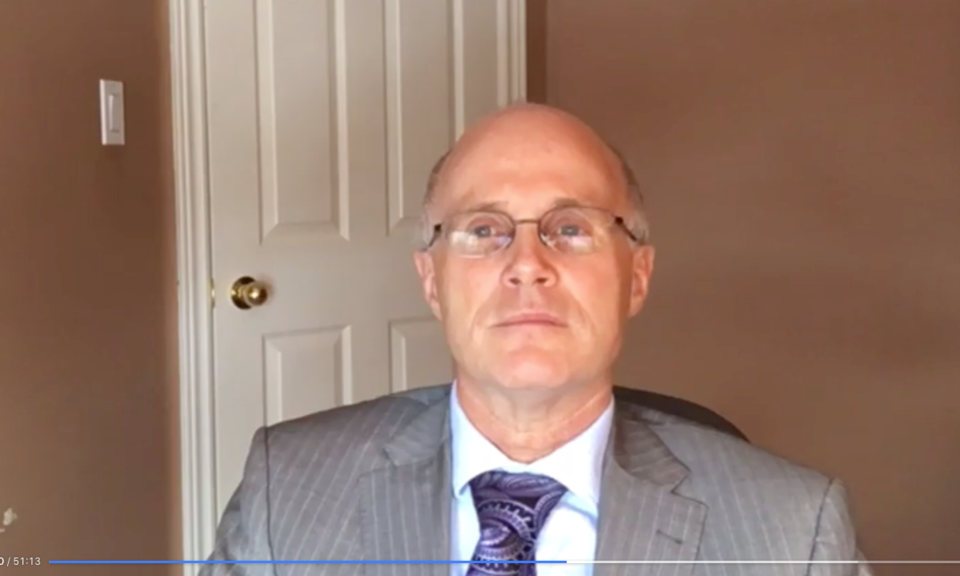 Dr. Charles Gardner delivers a weekly update via Facebook livestream to the media and the public on Nov. 17, 2020. Screen capture

The region’s medical officer of health is urging diligence as the region leaves lockdown mode on Monday.

A letter from Dr. Charles Gardner, issued to residents in the region and posted on the Simcoe Muskoka District Health Unit website, stated the B.1.1.7 variant from the UK is still a concern.

Of the region’s 416 active, lab-confirmed cases, 144 (about 35 per cent) have screened positive as variant cases.

The B.1.1.7 variant was first confirmed in Simcoe County in the outbreak at Roberta Place this January. Within 48 hours of confirming one case (and without knowing it was a variant strain) there were 55 confirmed cases at the Barrie long-term care home.

In total, 71 people died as a result of the outbreak and there were several hundred cases linked to the outbreak including all but one resident, many staff, some contract workers, and their household contacts. The health unit tracked second and third-generation infections resulting from the outbreak.

“We may see an increase in the incidence of COVID-19 in the weeks to come,” said Gardner in his letter. “And the potential need for further protective measures.”

He confirmed today’s provincial announcement to move Simcoe Muskoka into the red zone of the COVID-19 Response Framework on Monday was at his request, as was the lockdown designation that began this Monday, March 1.

Gardner said his recommendation of red zone restrictions is based on the overall incidence of COVID-19 remaining stable over the past two weeks.

“We have a very large number of cases and outbreaks of the B.1.1.7 variant in Simcoe Muskoka,” wrote the doctor, adding those outbreaks cross all sectors from restaurants to personal care settings, offices, manufacturing facilities and an agricultural setting. There is also evidence of non-outbreak-related community spread of the variant strain.

“I wish to reiterate that early in the week of Feb. 21, I became concerned as a result of the 30 per cent increase in Simcoe Muskoka’s overall COVID-19 case count … coinciding with the continued spread of the B1.1.7 variant in our communities,” stated Gardner.

Because of this, he recommended the region be locked down.

“I did so even though the overall case count for COVID-19 was only moderately elevated above the threshold for the red-control zone, as the province’s framework does not take into account the potential impact of the UK variant,” he wrote.

He acknowledged those who reached out to him and raised concerns over the lockdown.

“I regret the difficulty that is caused by our response to the pandemic, even as we strive to reduce the illness and the deaths that occur from this tragic pandemic,” stated the letter.