Town staff blocked streets and kept one parking lot for residents only, but that pilot project 'may or may not' continue for weekends in the summer
Jul 8, 2020 1:15 PM By: Erika Engel 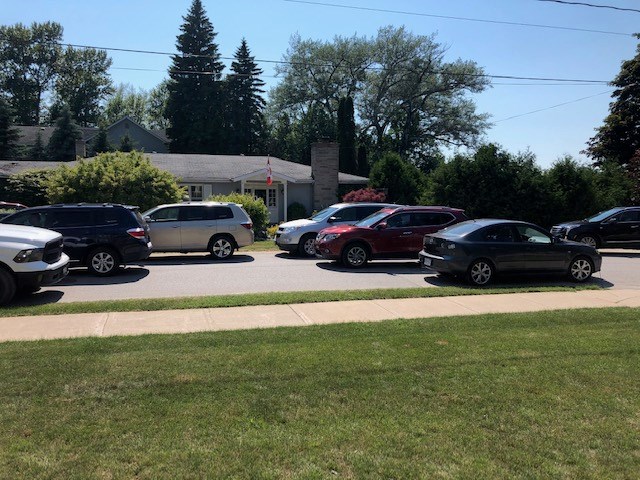 Cars parked on both sides of Niagara Street after the parking spaces at Sunset Point filled up this weekend. Contributed photo

After witnessing crowding and overfilled parking lots and spaces at two of its parks, Town of Collingwood staff tried physically blocking streets and reserving a parking lot for residents only to control the chaos.

But a more permanent solution hasn’t been decided yet.

Milanovic said Sunset Point was at maximum capacity on Saturday. Area residents report there were cars parked along both sides of residential streets near the park, and the parking lots were full. That’s in addition to the people who arrived at the park on foot or by bicycle.

According to Milanovic, those tickets were issued to gatherings of 21,31, and 16 people.

Const. Martin Hachey, the communications officer for Collingwood and The Blue Mountains OPP, said OPP were patrolling public areas in both municipalities on foot.

“I was not made aware of any occurrences that were noteworthy,” said Hachey. “As a whole, the OPP will not discuss charges as education and voluntary compliance is always preferred over enforcement.”

Though asked, Hachey would not divulge whether OPP laid any charges related to the province’s emergency orders or COVID-19 restrictions.

According to Milanovic, OPP was issuing provincial offences tickets in The Blue Mountains and Collingwood.

“There were two disputes where bylaw officers were harassed,” said Milanovic. In both those cases OPP was called, he said. “Extra people at our beaches has caused concern with issues that are already hot topics with residents, i.e. garbage, overcrowding, parking, and lack of respect for public plans. These problems are amplified with the presence of COVID-19."

Resident George Powell had several residents gathered in his yard this weekend to allow them a chance to speak to town councillors, who were also at his property at the time.

“There has been a major increase [in visitors] to Sunset Point Park due to the weather, COVID-19 and free admission,” said Powell.

Another Sunset Point resident, Ted Rowe, said the park and parking areas were “jam-packed” on the weekend.

Wasaga Beach closed a portion of the beach (the sand-covered road) after experiencing high visitor volume last weekend. The Blue Mountains is implementing a paid parking system at some of its larger beaches, including Northwinds, which is closest to Collingwood.

On Sunday, July 5, parks, recreation, and culture employees set up the east end parking lot at Sunset Point for residents and staffed the entrance, checking identification before allowing cars in.

They also put up barricades to block street parking on Raglan, Huron, Niagara and Russell streets.

Milanovic said it was a test pilot for more control over the crowds and parking issues at Sunset Point.

“It seemed to be successful,” he said.

Though it did require town staff to be on-site the entire day.

Rowe said the town’s plan “may have helped” but he’s not convinced it made a big difference.

He said the town should increase fines for parking illegally.

“If the fine is $20 to $30, they don’t care, they’ll pay it,” said Rowe, noting it would also go far if the town had a couple of illegally parked vehicles towed.

Most parking tickets in Collingwood range from $20 to $50.

Though there’s talk around the council table and at town hall of putting in a paid parking system, but Rowe doesn’t think the cost of putting a system in place will be worth it.

“This parking issue is at the maximum a 12-weekend issue,” he said. “The two big days are Saturday and Sunday. Other than on weekends, you can shoot a cannon through the park, walk your dog at your leisure.”

Both Rowe and Powell worried that barricades preventing parking on some residential streets will push people to other area streets to find parking spots so they can still go to Sunset Point.

According to Milanovic, Millennium Park was also overcrowded and had some parking issues. He said staff increased bylaw enforcement presence in the park and are working on plans for future enforcement.

Milanovic said some of the options currently being considered by staff include continuing with interim solutions such as the one implemented Sunday, overall park closure times, paid parking, closure of parking areas, strict enforcement of parking areas, and closing or changing local streets to one way.

“We’re limited on resources as it is,” said Milanovic, noting the town would have to re-hire or call-back part-time and seasonal staff to manage control measures at the town’s parks.

The discussion of Sunset Point parking and crowd control is on tonight’s agenda for council’s Strategic Initiatives Committee.

Councillor Bob Madigan tabled a motion to have staff review a paid parking policy for Sunset Point and report back to council on the feasibility of a paid parking pilot project in 2020.

“There’s no reason our taxpayers should have to pay for garbage pickup,” said Madigan.

His motion will come up for a council vote later this month.

Ontario confirms 88 new COVID cases today
Aug 7, 2020 10:43 AM
Comments
We welcome your feedback and encourage you to share your thoughts. We ask that you be respectful of others and their points of view, refrain from personal attacks and stay on topic. To learn about our commenting policies and how we moderate, please read our Community Guidelines.