Council met to formulate and pass a motion calling on the province to lift the local lockdown and let Collingwood businesses open up again
Mar 1, 2021 9:18 PM By: Erika Engel 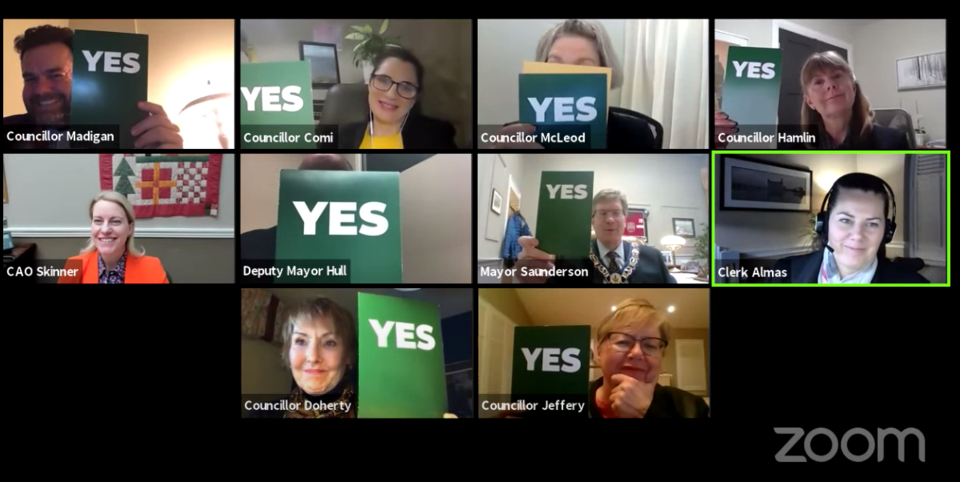 Collingwood council votes unanimously (Coun. Steve Berman did not participate) on a multi-action resolution calling on the province to return Collingwood to red zone and lift the lockdownScreen capture

Collingwood council is demanding an explanation from the province for the local lockdown and asking for the town to be returned to red zone (or lower) restrictions effective immediately.

Council is also calling on business owners and residents in the town to start a letter-writing campaign calling on the province to lift the lockdown in Collingwood and allow local businesses to reopen.

Council met twice today to discuss the issue, once during a strategic initiatives committee meeting, and again this evening for a special meeting called exclusively for discussions about lockdowns.

Collingwood, along with the rest of Simcoe County and Muskoka District, entered the grey/lockdown zone restrictions of the province’s COVID-19 Response Framework this morning (March 1). The change was ordered by the province on Friday on advice from the region’s medical officer of health Dr. Charles Gardner.

To date, the framework has been applied to health unit regions, so a colour-coded designation applies to a health unit as a whole, and not just one city or town within it.

However, immediately to the west, The Blue Mountains and the rest of Grey and Bruce County opened up with a green zone designation in place as of this morning.

Mayor Brian Saunderson said the stark difference between restrictions in the two neighbouring municipalities is “unconscionable.”

“We’ve got two halves of a large economic engine that are now at opposite ends of the spectrum,” said the mayor.

Councillor Bob Madigan, a long-time business owner in Collingwood, wanted council to send a more aggressive message to the province, telling the premier to put Collingwood in the green zone to match The Blue Mountains.

“Business owners are scared. They’re at the point where they feel they’re drowning and cannot keep up … they want this to be over and done with,” said Madigan. “It’s either everybody’s closed or everybody’s open … I would like to see the businesses in Collingwood succeed as much as the businesses in The Blue Mountains are.”

Deputy Mayor Keith Hull said the province and medical officer of health owe both Collingwood and The Blue Mountains residents an explanation and an apology.

“We know the area immediately adjacent to Collingwood is a playground for the province,” said Hull, referencing The Blue Mountains. “They’ve created a sort of open playing field for people to come, and at the same time literally put handcuffs and restraints on very similar businesses within our own municipality.”

Hull also pointed out it's the businesses with a local customer base, such as gyms and salons, who are the most impacted and seem to be "targeted" by provincial shutdowns and lockdowns.

Councillor Yvonne Hamlin said the lockdown in Collingwood was “unacceptable.”

“Let’s get on with it,” she said. “We know how to keep ourselves safe … we just need something simple for our residents, our businesses, our visitors and everyone who works in surrounding municipalities.”

The Downtown Collingwood BIA also met today and are calling on the province to put Collingwood back into the red zone at minimum and immediately.

“Within the BIA we have 61 independent businesses that are directly and inappropriately being held from conducting business,” stated a letter sent to council from the BIA. “These are salons, barber shops, spas, gyms, fitness centres, restaurants, and cafes.”

A media release issued by the BIA states “mechanisms to deal with unusual circumstances: have been used already during the pandemic and the BIA is asking the health unit and the province to do so again by taking Collingwood out of the region’s lockdown designation and reinstating red zone restrictions.

During the final meeting of the evening, council unanimously supported a motion with eight action items including:

Councillor Steve Berman declared a conflict and excused himself from all debate and decision on the matter.