Fat biking is growing at a rapid pace in Collingwood and across Canada, and one local enthusiast encourages everyone to try
Feb 6, 2020 11:00 AM By: Maddie Johnson 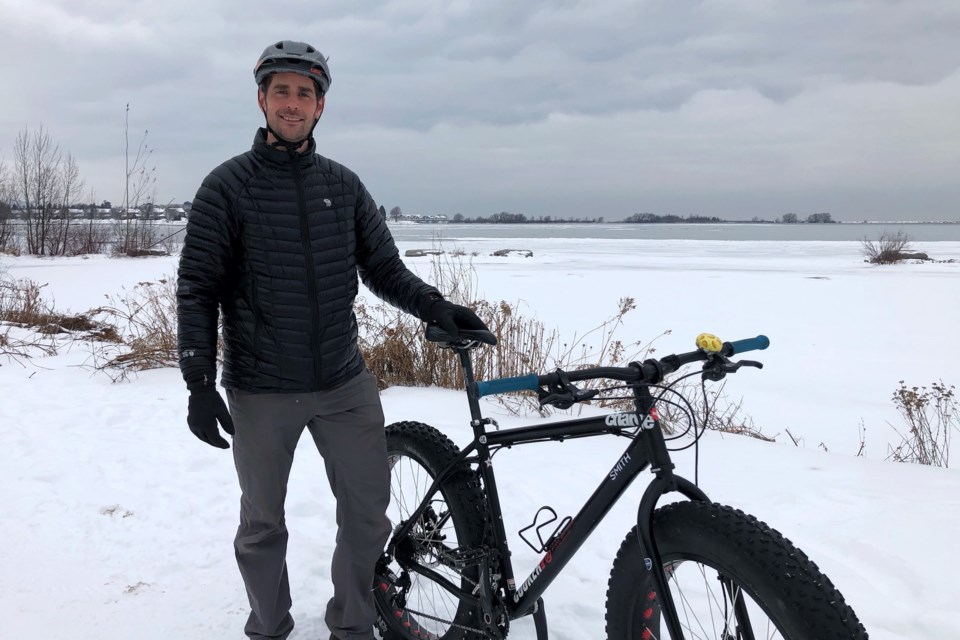 Tim Carter, the owner and operator of Ride Guides, loves that his fat bike gives him another way to get outside and enjoy the winter. Maddie Johnson for CollingwoodToday

Snow is lightly falling on the otherwise mild day as Collingwood resident Tim Carter unloads two big bikes out of the back of his truck.

These bikes look a little bit different, though.

The wide wheels and thick frames are intimidating, but according to Carter, adding approximately four inches to your tires loosens the limitations on your winter adventures.

“We’ve had really good conditions this season,” said Carter. “I love to go out and get nice and lost.”

The genesis of the modern fat bike is similar to the development of the conventional mountain bike. Cyclists didn’t like being restricted, and as needs kept changing, so did the shape of their bike.

In the 1980s, bikers began experimenting by adding additional tires to their mountain bikes to give them a wider footprint. The evolution was happening in Alaska on the snow, and simultaneously in New Mexico to conquer the sand. In 2005, the first fatbike became commercially available in bike shops worldwide.

According to Carter, the fat bike didn't catch on in Collingwood until recently (within the last ten years).

While mountain biking has become a Blue Mountain mainstay, fat biking is far from being widely accepted. With deserted winter trails and curious onlookers when fat tires fly by, the sport still has a lot of potential to grow.

Carter, who owns and operates Ride Guides, grew up cycling and mountain biking in England. When he moved to Collingwood 14 years ago, he realized he would only be able to pursue his passion in the summer months.

That’s when a friend introduced him to fat biking.

“I tried it and I loved it,” said Carter. “I got one for myself and I haven’t stopped.”

Carter has worked as a bike mechanic for various shops in the area for several years, and he was as Ride Guides’ first instructor when the company launched in 2013. When the business became available three years later, Carter took it over, hoping to continue offering premiere cycling adventures all over Ontario.

In the summer months, Ride Guides provides mountain bike training camps and clinics as well as tours all over South Georgian Bay.

In the winter, they focus on fat biking. When Carter first took over the business, he offered tours based in Collingwood. But after a few years of unpredictable weather and constant rescheduling, he moved the fat biking sessions to Horseshoe Valley.

The Introduction to Fat Biking course is a two-hour guided ride that takes you around Horseshoe Resort and deep into the Copeland Forest. Depending on your level of expertise, Carter may take you up some steep hills and down a single track on the other side. The course includes a mini fat bike specific skills session, so riders are prepared for the limited traction on the snow covered trails.

“It’s very easy to go and rent a bike, ride it, and hate it,” said Carter. “If you don’t know what you’re doing it’s not going to be fun.”

Carter spent some time competing in fat bike races throughout Ontario, but quickly realized the competition aspect wasn’t for him.

“I just like to ride, and help other riders become better riders,” he said.

For the most part, fat bikes are still limited to staying on trails. If the snow is too soft the bike will sink, sending the rider over the handlebars. But according to Carter, fat bikers find trails out of anything, following behind packed down snowshoe trails, or even deer tracks.

“You don’t need much, just something to pack it down, and then you can have a little fun,” he said.

Carter’s ideal conditions are late February and early March, when the snow starts to do the thaw-and-freeze-over dance, leaving a crusty layer over the snow so he can “fly” anywhere he wants.

“When you’re on your fat bike and the conditions are good, you aren’t tied down to any trail. You can explore the entire forest,” he grinned. “But you have to get out first thing in the morning, when the snow is tight.”

Carter acknowledges that the sport is still relatively new, but he hopes to see it continue to grow. He also loves that the fat bike isn’t restricted to snow, and sometimes opts to take it out on the sand and through the woods for a different adventure in the summertime.

“For those of us who spend the warmer months biking, hanging up your bike for the winter is awful. The majority of fat bikers are just cyclists who don’t want to stop,” he said.

There are fat bike races and expeditions that now happen all over the world. In Ontario, there is even something called a Poker Run, where bikers collect cards from different stations in the woods and whoever has the best poker hand at the end wins.

“There is always a fun aspect with fat biking,” he said. “I don’t think it will ever be as serious as road or mountain biking.”

In the early years, many thought fat biking would pass as yet another fad. But even bike shops owners in the area are seeing a spike in the increasing demand for fat bikes.

Kris Baumgarten, the owner of Kamikaze Bikes in Collingwood, said they started carrying fat bikes when the sport first came to Ontario.

"It started off fast and furious in the first few years, and then levelled out a bit," said Baumgarten. "But in the last few years it's taken off again. As more places are offering a groomed network of trails, more people are asking for [fat bikes]."

Kamikaze partnered with Highlands Nordic to offer a bike rental and day pass combo, so beginners can easily try the sport as well.

Ultimately, it’s another way to get outside and enjoy winter.

“Life is busy. I like to go out by myself for my own peace of mind,” said Carter. “Nothing beats the serenity of riding through a silent forest at first light, hearing the snow crunch beneath your tires.”