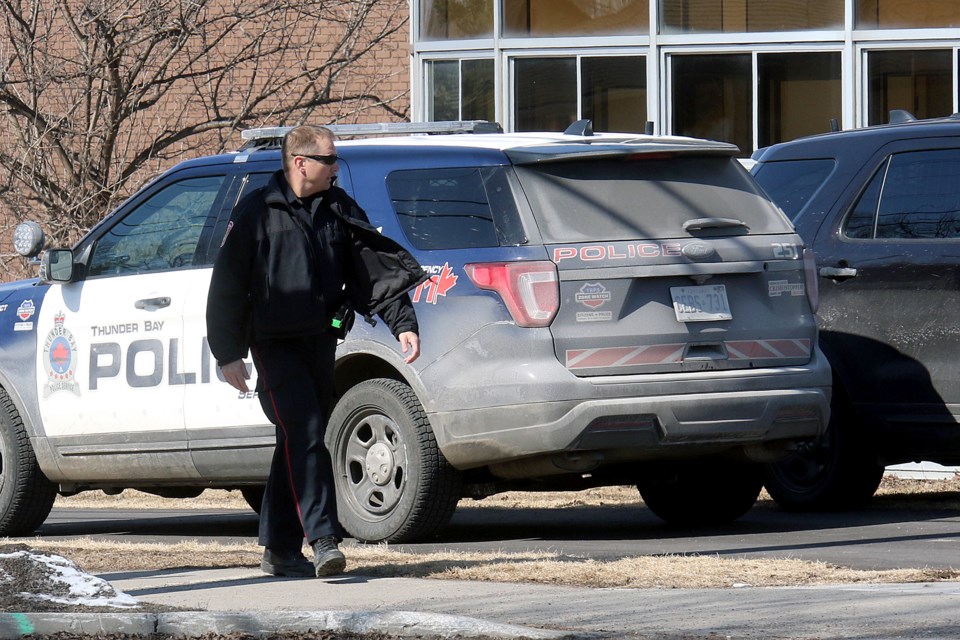 At least 11 marked and unmarked police vehicles swarmed Hammarskjold High School on Thursday, April 4, 2019 after a seventh threat was made against the Clarkson Street school. (Leith Dunick, tbnewswatch.com)

THUNDER BAY - Two suspects arrested for their alleged connection to anonymous threats directed at Hammarskjold High School made their first court appearances and have been released from custody.

The Thunder Bay Police Service on Wednesday arrested the pair as part of their lengthy investigation into the numerous threats, involving possible shootings, bombs and suspicious packages, targeting the north-side high school. They appeared in a Thunder Bay courtroom on Thursday.

Emilie Jade Pakrashi, 18, has been charged with three counts each of public mischief and mischief endangering life for incidents that occurred on Tuesday, as well as April 8 and 9.

A 14-year-old male, who can't be named under the Youth Criminal Justice Act, is facing four counts each of public mischief and mischief endangering life for incidents alleged to have occurred on Wednesday, as well as April 11.

Hammarskjold has been closed on 12 separate occasions this academic year after the school was targeted by threats. One incident earlier this month also included Superior Collegiate and Vocational Institute, which was closed for one day.

Both of the accused have been ordered to not have any contact with students or staff at Hammarskjold and not come within 500 metres of the Clarkson Street school, unless the youth is in the company of his parents. They have also been ordered to not possess or use any computers or devices that have access to the Internet.

The two have each been ordered to not possess any weapons or apply for a firearms licence.

The charges have yet to be tested in court.

Police make arrests linked to Hammarskjold threats
Apr 17, 2019 5:23 PM
Comments
We welcome your feedback and encourage you to share your thoughts. We ask that you be respectful of others and their points of view, refrain from personal attacks and stay on topic. To learn about our commenting policies and how we moderate, please read our Community Guidelines.

About the Author: Matt Vis

Born and raised in Thunder Bay, Matt is honoured to tell the stories of his hometown.
Read more