ISLAMABAD — A reporter working for Pakistan's leading Geo News television who had gone missing in the southern port city of Karachi has been found, family and colleague said Saturday.
Oct 24, 2020 12:52 PM By: Canadian Press 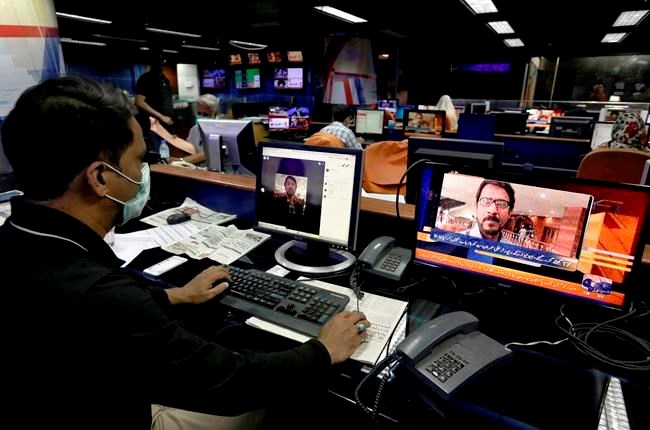 ISLAMABAD — A reporter working for Pakistan's leading Geo News television who had gone missing in the southern port city of Karachi has been found, family and colleague said Saturday.

Geo bureau chief in Karachi, Fahim Siddiqi, said Ali Imran Syed had contacted his wife by phone to say that he had reached his mother's home.

Earlier police registered the journalist's disappearance as an “abduction” case without naming suspects.

The reporter left home late Friday evening telling his wife that he would be back in half an hour before disappearing for 72 hours.

Recently there have been several cases of Pakistani journalists being detained or abducted for several hours, before being released.

Azhar Abbas, head of the Geo TV, earlier said he has contacted provincial and federal authorities “to help trace the missing reporter” and “ensure his safety".

Siddiqi said the reporter's abduction may have been related to his work on recent political events, including the arrest of an opposition leader who is the son-in-law of former premier Nawaz Sharif.

Minister for Human Rights Shireen Mazari said in a tweet no one should “disappear in a democracy”.

Pakistani media has been facing renewed pressure from state agencies that have sought to control the topics covered by the media and even restrict the selection of guests for TV talk shows.

In December last year, a Karachi based reporter with the Express Tribune newspaper, Bilal Farooqi, was arrested on charges of spreading hateful content against the country’s military on social media.

In July, Matiullah Jan was briefly detained. Jan is known for criticism of Pakistan's military and security agencies.

Waiting for passengers, American puts Boeing Max in the air
Dec 2, 2020 7:05 PM
Comments
We welcome your feedback and encourage you to share your thoughts. We ask that you be respectful of others and their points of view, refrain from personal attacks and stay on topic. To learn about our commenting policies and how we moderate, please read our Community Guidelines.