DENVER (AP) — A former high school student accused of teaming up with a classmate to kill teens in a suburban Denver classroom in 2019 was convicted Tuesday of all 46 charges against him, including murder for the death of a student who tried to stop
Jun 15, 2021 7:47 PM By: Canadian Press 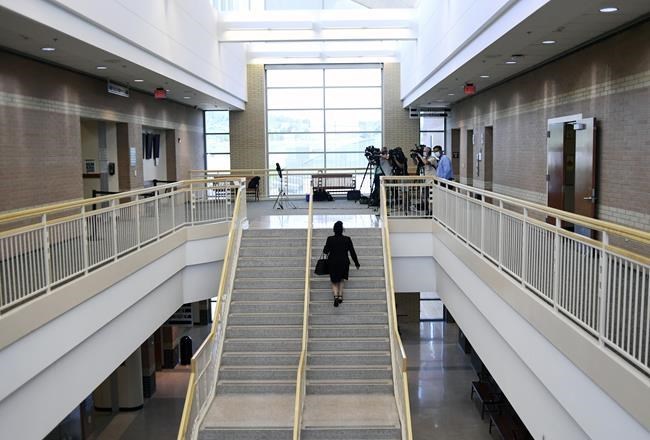 DENVER (AP) — A former high school student accused of teaming up with a classmate to kill teens in a suburban Denver classroom in 2019 was convicted Tuesday of all 46 charges against him, including murder for the death of a student who tried to stop the attack.

The verdict against Devon Erickson came less than 24 hours after lawyers delivered closing arguments in his trial. Prosecutors said Erickson, now 20, was a full partner with Alec McKinney in the shooting that killed Kendrick Castillo, 18, and wounded eight others at STEM School Highlands Ranch in an unincorporated suburban community south of Denver.

The shots were fired in a darkened classroom of high school seniors, who were watching “The Princess Bride” in the days leading up to graduation. Castillo and two other students, Joshua Jones and Brendan Bialy, charged at Erickson after he pulled out a gun, which jammed after he fired four times.

Defense attorneys argued that Erickson, who was 18 at the time, was manipulated and pressured into participating by his younger friend. McKinney testified against Erickson after pleading guilty last year.

Since he was an adult at the time of the shooting, Erickson faces a mandatory sentence of life in prison without parole for his murder conviction plus many more years for the other charges. A sentencing hearing was set for Sept. 17.

McKinney, who was 16 at the time of the shooting, could become eligible for parole after about 20 years in prison under a program for juvenile offenders.

Despite the pending mandatory life term, prosecutors asked that a report be prepared that recommends a sentence and summarizes the evidence presented at trial. That information could help deter a future governor who might possibly consider clemency for Erickson, District Attorney John Kellner said. The judge granted the request.

John Castillo, Kendrick Castillo’s father, projected a quiet, calm satisfaction after the verdict, saying he felt his slain son’s presence throughout the day.

“I’m sure he was looking down today,” Castillo said. “I believe, I feel, he was with us. He was probably with those jurors making their decision. ... This day was justice for him.”

During closing arguments, Erickson's defense lawyer, David Kaplan, told jurors that the shooting unfolded without a true plan and happened only after Erickson, who was sent to the nurse’s office after he looked sick, got a threatening message from McKinney to help with the attack.

The defense also raised the possibility that Castillo was accidentally shot as he pushed Erickson against a wall.

The prosecution disputed the theory, saying an accidental shooting was not likely given the positioning of the two. Jones and Bialy struggled to get Erickson to give up his gun after Castillo was shot, prosecutors said.

As the verdict for each count was read, Erickson stood nearly motionless, hands clasped in front of him, staring straight ahead and blinking as his parents sat in the courtroom. He was wearing a gray suit and tie and had short, neat brown hair in contrast to the longer, purple hair he had at the time of the shooting.

Former STEM school student Mitchell Kraus, who was wounded in the shooting, had walked Erickson to the nurse’s office just minutes before the attack. Erickson never gave any indication that something was about to happen, Kraus said Tuesday.

Kraus, now a college student, said he had struggled to put the shooting behind him but recently has started to believe he can.

“Now that I can be sure that this monster, to be honest, is never going to see the light of day again, it’s just a weight off my back,” he said.