Brandon Usher started a fitness training business in his parents' garage and will open his own brick-and-mortar location this fall
Sep 2, 2020 12:30 PM By: Maddie Johnson 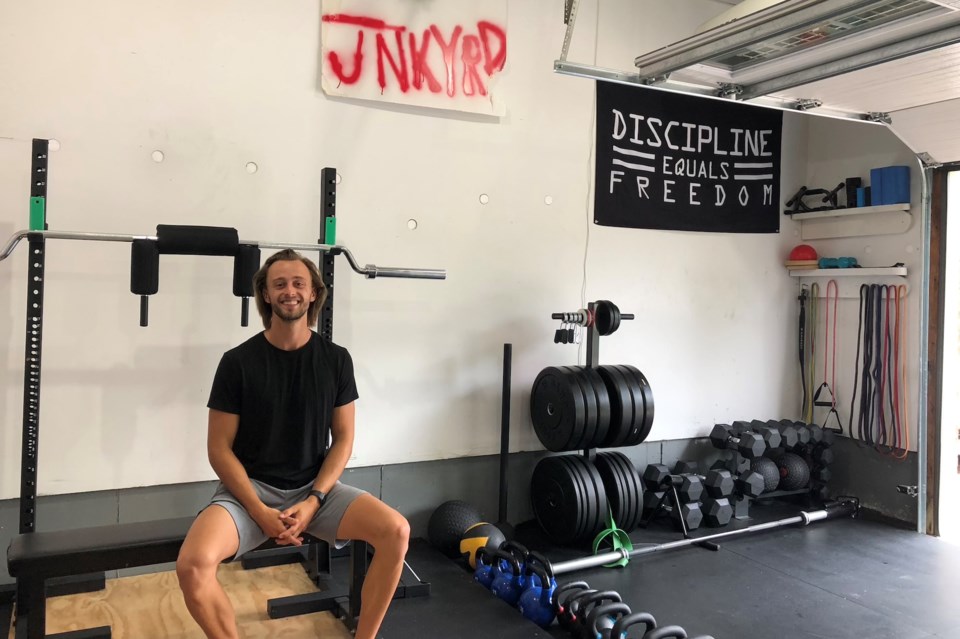 Braden Usher, founded Braden Usher Fitness in his parents garage, which he dubbed The Junkyard. He's looking forward to opening a new space in Collingwood soon. Maddie Johnson for CollingwoodToday

However, it was only a few years ago that he applied this attitude to another area of his life he is so passionate about: fitness.

“Running my own thing and working for myself is something I have always prioritized,” said Usher. “Fitness was my life, I was totally passionate about it, but I didn’t think I could make a career of it.”

The 23-year-old from Collingwood embarked on his first business endeavor when he was only 8-years-old.

On a family trip to Florida, Usher became intrigued by the colourful hacky sacks available at Ron Jon Surf Shop. Instead of asking his parents to buy him one, he thought, “I can make that,” and after returning home he sewed his own to sell at Fathom, a local board store owned by his father.

“I like to learn something and then figure out a way to do it better,” said Usher.

As he got older, Usher cycled through several other endeavors, including landscaping, piano lessons and an on-demand small deliveries business. After dropping out of university, he got a job as a trainer at GoodLife Fitness and began focusing more on his own fitness while trying to figure out what was next, and eventually started training for his first bodybuilding competition in the fall of 2017.

“I was learning so much about my body when I was competing, but also learning a lot about coaching while I was training other people,” he said.

Usher was hooked. He spent the following spring training for his second competition and obtaining all the necessary certifications while developing his business plan. In the summer of 2018, he founded Braden Usher Fitness.

Usher started promoting his new business on Facebook Marketplace, offering personal training sessions at a low cost to anyone willing to take a chance on him. It started with outdoor classes that first summer, but as the fall neared he began building a gym in his parent’s garage, which was later dubbed “The Junkyard.”

The more he trained, the more he learned, and his business began to build.

“There truly is an art to coaching,” said Usher. “It may sound weird, but I think teaching is one of the best ways to learn.”

Usher quickly grew from two clients to more than 20, filling his days with one-on-one sessions, group classes, and creating programs for clients to continue at home as well. However, he had his sights set on something higher.

He always wanted to build something bigger than himself, and this fall Usher will officially open his own facility in Collingwood under the brand Train for Life.

“I’ve been using these past two years as almost an incubation time, learning as much as I could and perfecting the system,” said Usher. “It’s been a lot of trial and error.”

Since day one Usher always intended to open his own space, but he is thankful for the use of the garage in the interim. Over the past two years, The Junkyard transformed from a small space in the corner to Usher slowly taking over the whole garage, insulating it and adding high end equipment, such as his recent additions of a skier, rower and TrueForm Runner.

“Each piece, everything in here was picked with detail,” he said. “I’ve been ready to move for a bit but I wanted to find the right space at the right time. I really got to push the limits of this space.”

Over the years, Usher has gained experience working with clients of all ages and capabilities. Currently, his youngest client is in Grade 6 – a competitive basketball player for Team Ontario – but Usher also trains her father, a university professor who simply wants to feel better in order to keep up with his kids.

While the two demonstrate the wide range of Usher’s capabilities, the latter is where his passion particularly lies.

“You don’t necessarily need an event or competition or any reason to train. Sometimes you just want to feel better. You have one body, and if that body can perform its best and feel its best then you probably will have a better life,” said Usher.

And that is exactly the direction he wants to go to with his new facility.

Ultimately, Usher hopes to own a bigger facility with all in-house, inclusive services. But keeping in line with his dedication to mindful growth, he is first focusing on building a team of trainers and employees who embody the same values he does.

“If you have an established business, people want to work for it, but when you are still growing it’s harder to have someone invest in you,” Usher said. “It’s been interesting trying to sell the brand and the business, not only to customers but to potential partners, employees and trainers as well. Personal training and fitness is more of a behavioural and communications business than people realize.”

The COVID-19 pandemic forced Usher to pause and prioritize this side of the business.

“I’ve run businesses in the past, but with each one getting bigger it’s a whole new mountain to climb,” he said. “There is a lot of back-end, management stuff you don’t think you are going to encounter, which I didn’t realize.”

The pandemic also allowed Usher to prioritize his own health and fitness goals, and he took the time to experiment with outdoor activities and adventures, breathing exercises, cooking and even gardening.

Focusing on health holistically is another aspect Usher wants to bring into his new facility.

“It’s all about balance ,,, I like to bring it back and focus on how we can make your life better and work on you. It’s your happy time. It’s your time to focus on you, whatever that is that day,” he said.

To learn more about his services, visit Braden Usher Fitness.