Restaurateur honours Greek roots while moving up on Hurontario 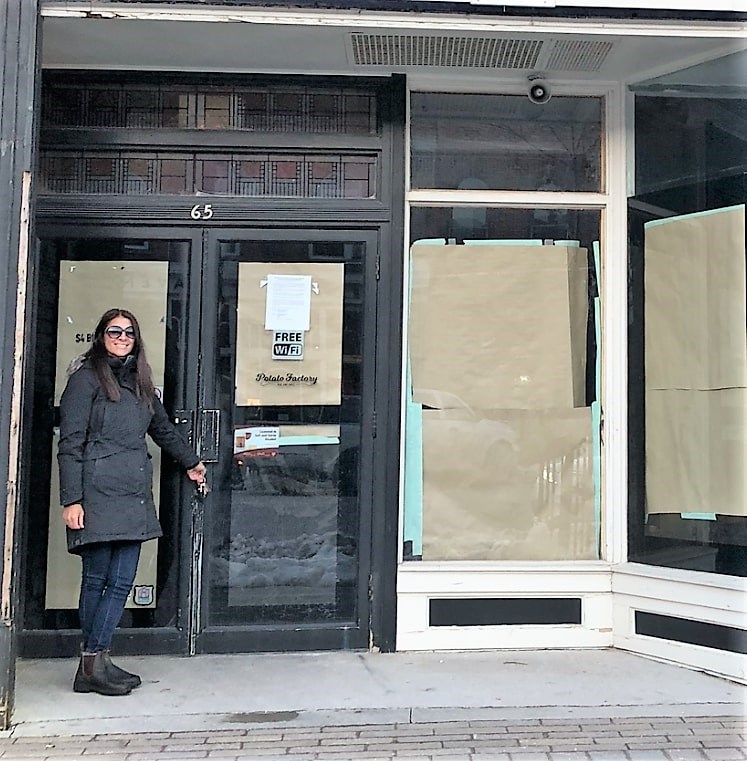 Bessie Lewis, owner of Fig & Feta, stands outside her new location at 65 Hurontario Street. The new location is slated to open by June. Contributed image

After 20 years of a storied restaurant career, Bessie Lewis decided to strike out on her own.

Her choice has proven so successful she’s already moving to a bigger space to keep up with demand.

Construction is underway at the new 65 Hurontario Street location for Lewis’ restaurant – Fig & Feta – with a plan to open the new space before the summer months hit.

Lewis said 18 months ago she was splitting time working at three different restaurants around town.

“I worked at a breakfast restaurant during the day, studying everything I needed to learn there, and at a fine-dining restaurant at night,” said Lewis. “I’d have to work around my schedule with my husband and three kids and all the other things that come along with being a parent.”

When the opportunity came up for her to lease the space at 166 Hurontario, she jumped at it.

“I didn’t want to wait until I was an elderly person,” said Lewis, with a laugh. “So I took a chance a year and a half ago and hoped for the best.”

Lewis said she settled on opening a small Greek eatery to honour her own roots, as well as giving eaters healthier options.

“I have learned pretty much every style of food but I really wanted to do Greek because that’s my background. I had old recipes and took notes and made the food for years and years. I also reinvented the Greek menu so that it would be different from everybody else (by adding) a healthy twist,” she said. “I didn’t want to do it just for the money. I wanted to do it so people would come, eat my food, it would be fresh and they would remember. So that’s what I did.”

Lewis said the first year in business was hard. She was working 80-plus hours a week to get the business off the ground.

“I wanted everybody to have a good experience,” she said. “The first year is the toughest. I think if you can get through the first year, you’re OK.”

Lewis found herself surprised by the genuine gratitude she felt toward her customers once the tables turned and she became a restaurant owner herself.

“While working at other restaurants I had customers I saw everyday, they were regulars. But when you own the business yourself, it’s totally different,” she said. “We have people who come here every single day. I feel like we must have done something right to have these people come daily.”

“I’m over the moon when people come in and tell me how much they like my food,” said Lewis.

According to Lewis, the demographics of people who come to eat at Fig & Feta varies widely.

“I get every single kind of person coming in here, which I’ve never experienced before in any of the other restaurants I’ve worked at,” she said. “If you could dream of a clientele that would come into your business and spend their hard-earned money with you, I somehow lucked out and have it.”

The new space at 65 Hurontario Street is currently undergoing renovations, but Lewis is champing at the bit to move in.

“It’s going to be a bigger, better version of the Fig & Feta,” said Lewis, adding that the new space is easily five times the size of the previous space.

Catering and take out will still be available, but the new space will bring opportunities for a small market with Greek products, a dining room near the back and a bistro and bar in the front.

“It will be a fully-functioning restaurant with a patio in the summer,” said Lewis.

While an official moving date has not yet been set, Lewis said renovations are underway with plans to open prior to the summer months.

“June, July, August and September in Collingwood is crazy,” said Lewis. “So I’m hoping (to open) by the end of May, or beginning of June.”

Looking forward, Lewis said she’s open to all the possibilities of what the future will hold for the Fig & Feta.

“Eventually, if the restaurant does really well, maybe I’ll open up a second location. Who knows? The options are endless,” she said.

Thornbury recording studio a lifelong dream in the making for engineer
Feb 12, 2020 10:31 AM
Comments
We welcome your feedback and encourage you to share your thoughts. We ask that you be respectful of others and their points of view, refrain from personal attacks and stay on topic. To learn about our commenting policies and how we moderate, please read our Community Guidelines.