Relaxation and calmness the goals of new wellness facility

For this week’s What’s Up Wednesday, we sat down with Jessica Racioppa and Deanna Harris, owners of Cedar and Sage at 20 Balsam Street, Unit 10
Sep 4, 2019 11:00 AM By: Jessica Owen 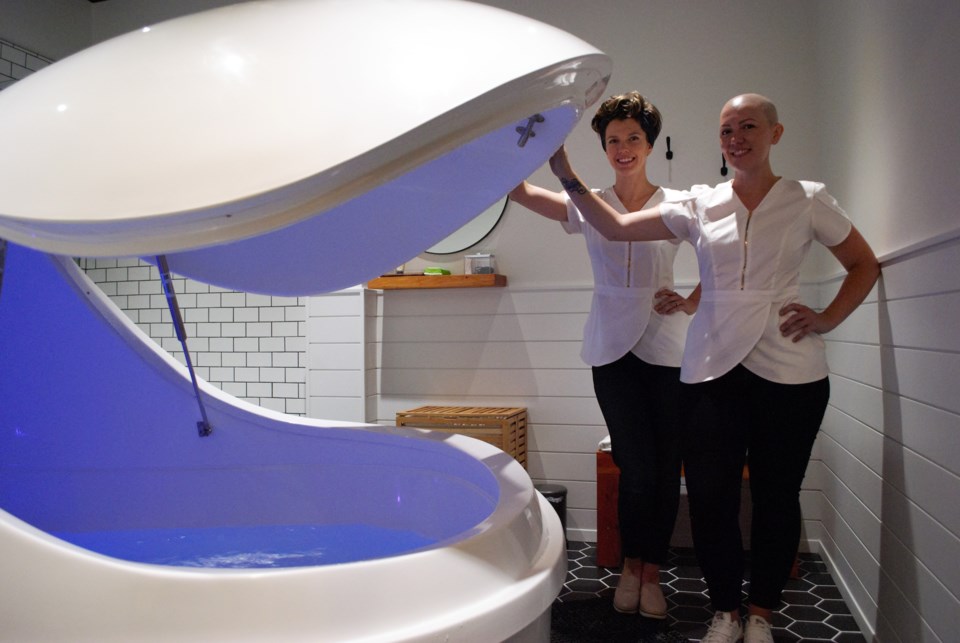 From left, Jessica Racioppa and Deanna Harris just opened their wellness facility Cedar and Sage in Collingwood this week. The duo are pictured with one of their float pods. Jessica Owen/CollingwoodToday

If you’re looking for a place to relax, a newly opened wellness facility in Collingwood might cure what ails you.

“We met just over two years ago at another spa. We chatted about it and decided, we can do this,” said Racioppa. “We were both into yoga and had been practising for a long time. We knew we wanted to open something (ourselves) and it just kind of snowballed.”

“I was a social worker before this, but then I got burnt out,” said Harris. “I eventually got into a more natural, holistic life through (learning about) nutrition, yoga and massage. When I met Jess, we knew we had the same views on that so we took it from there.”

“It was always the path I knew I was going to go on,” said Racioppa. “It’s been a passion for both of us and it’s nice to see it come together.”

The duo wanted to do something more community-driven that would be accessible to people at all price points.

“We’re trying to give people a beautiful place to be, but keep it at a price point that’s reasonable,” said Racioppa, adding that their space is more of a wellness facility since they don’t offer aesthetics. “We wanted to find out what was missing, and how to make a good little hub for wellness in Collingwood.”

The spa has two float pods which are unique to Collingwood, as they are not used in any other spa in the area. The next nearest float pods are in Barrie or Toronto.

The pods are for sensory deprivation. Users can float for 60-minute sessions.

“There’s 900 pounds of salt in each pod, and only about a foot of water. It makes anyone able to float,” said Racioppa. “It’s kept at the same temperature as your skin, so it becomes hard to tell where you end and the water begins. It’s the only time you’re truly weightless.”

The pods have been shown to help people with joint and body pain, including those suffering from fibromyalgia or chronic pain, as well as people with anxiety, sleep or chronic stress issues.

Hot yoga is also done in-house. The heating for the studio is done with infrared panels, making it one of the few local studios that does true hot yoga.

The duo also completed all the renovations on their space themselves along with Racioppa’s husband, including flooring, walls, tiling and other improvements.

“It keeps us healthy, but tired,” said Harris, with a laugh. “But it’s nice to walk into any part of the space and know we’ve built some part of it.”

Although they only just opened, Racioppa said they have future plans for the business including workshops.

“We want to grow in that sense to really be known as a place to go to be taken care of,” said Racioppa. “We haven’t even taken a breath yet. It’s nice to finally be open.”

Cedar and Sage is located at 20 Balsam Street, Unit 10.