For this week’s edition of What’s Up Wednesday, we sat down with Charlene Crowhurst, co-owner of Press Juice Co. at 11 Simcoe Street
Aug 21, 2019 11:00 AM By: Jessica Owen 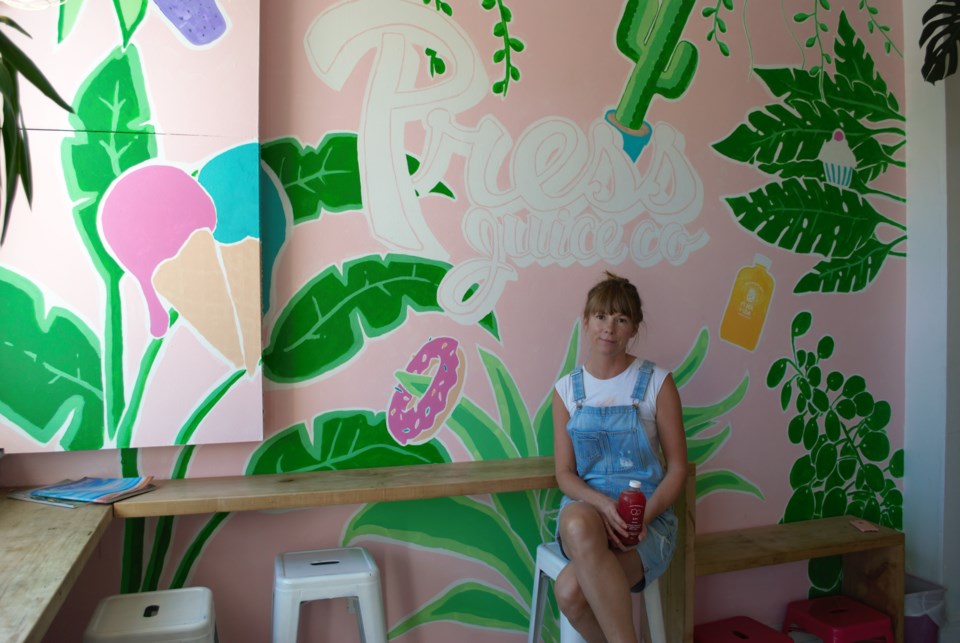 Former store manager Charlene Crowhurst and her partner Luke McNabb made the leap to buy Press Juice Co. in Collingwood’s downtown in October of last year, but aside from a few small tweaks, the duo has worked hard to keep the business as close to how they found it as possible.

“It’s still really early for me. I just dove right in. Everyday it’s been busy, but I do hope to expand the menu,” said Crowhurst this week in an interview with CollingwoodToday.

Press Juice Co. has been in Collingwood for more than four years. The original owners decided to get out of the juice game last year, which left an opening for Crowhurst to buy the business.

“I had been working for Press for almost three years. I started at this location and when they opened a second location, I was managing both of them,” said Crowhurst. “When the opportunity came up to buy this one, it seemed like a good idea.”

Crowhurst used to manage a raw vegan restaurant in Collingwood, which is how she got to know the previous owners.

In the beginning of Press Juice Co., the owners made their own juices in store.

“It’s a lot of work, which is why I think they eventually decided to source out cold-pressed juices,” said Crowhurst.

Pressed juice is made with a hydraulic press that extracts juice by weight from fresh fruits and vegetables.

“It’s more gentle on the fruits and vegetables so you preserve a lot of the nutrients that way,” said Crowhurst.

In a large juice (16 ounces) from Press Juice Co, there is approximately five pounds of produce. As there are no preservatives, the shelf life is shorter at about three days.

Press Juice caters to both dairy-free and gluten-free diets. Many of the ingredients such as the pea shoots, honey and eggs are sourced from a local farm.

In terms of the health benefits of eating a diet rich in fruits and vegetables, Crowhurst said it’s all about how you feel.

“People have more energy. I became vegetarian when I started working at the raw vegan restaurant years ago, because I heard about how this was changing people’s lives in a good way,” she said. “Juicing can help with inflammation, digestion and headaches.”

When the opportunity came up for Crowhurst to make the jump from manager to owner last year, she grabbed onto it.

“Over the last 10 years, I’ve basically been in this business,” said Crowhurst. “I know the community, the customers... it just seemed like what I’m supposed to do.”

“I thought it would be a good learning experience,” she added.

Crowhurst hasn’t made many changes to the business since taking over, aside from adding a few new smoothie recipes and vegan/gluten-free sandwiches to the menu this summer.

Making the transition from manager to owner has been more of a change than Crowhurst expected.

“The way I used to manage is I treated the business like it was my own,” she said. “So, I didn’t think it would be that different, but you do feel the pressure a lot more.”

“It’s funny, but for people out there who don’t know, we have really good curry,” said Crowhurst. “It’s very popular.”