Get into the spirit at Heretic Spirits 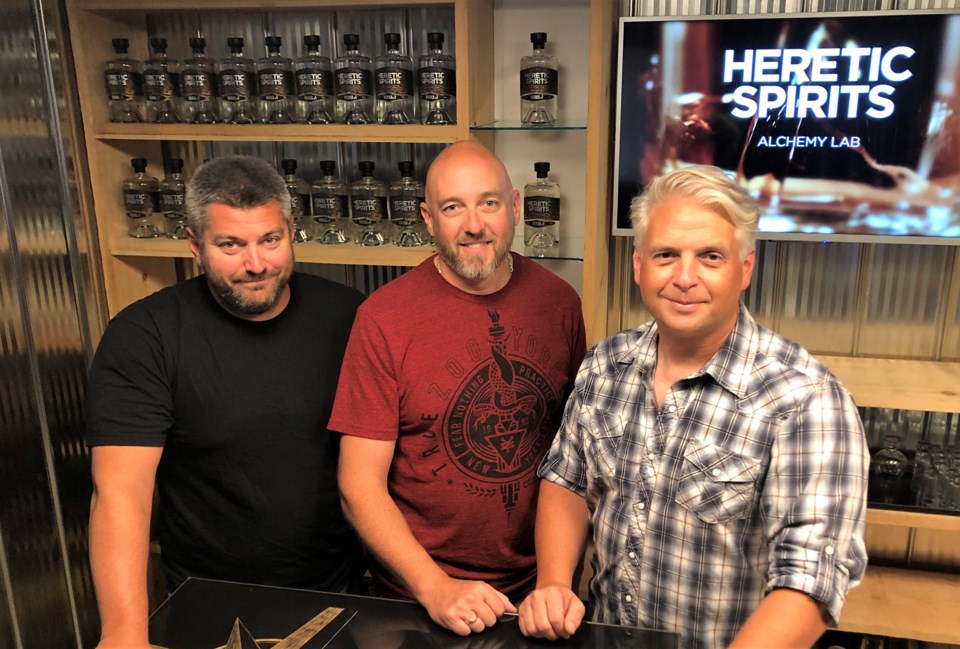 With the fall weather comes cooler temperatures, pumpkin everything and spooky spirits – but this past Friday the 13th, a different kind of spirit came to Collingwood.

Heretic Spirits opened their doors for the first time at 395 Raglan Street this past Friday. Scott Morrison, chief executive officer, Jeremy Hall, vice president of sales and Chris Morrison, operations, have worked hard over the past three years to oversee the launch of their craft distillery in town.

“(It feels) unbelievable. It’s a huge relief,” said Scott, with a laugh, in an interview with CollingwoodToday this week. “There’s been a lot to it. The community support has been so great, and we’re very happy with the product.”

Right now, the distillery boasts a gin and vodka, with plans for the future to expand to whisky, rum and liqueurs. Heretic Spirit vodka is corn-based. The vodka base is put through an ultra-fine filtering process to create the gin.

“It’s been a long haul, but it’s because this business is extremely challenging. It’s a lot of fun and super rewarding,” said Scott.

“This geographical area is absolutely perfect for this type of business. Collingwood has the most fabulous people and the greatest restaurants. Everybody’s outgoing and energetic,” he added.

The national craft distilling industry is very small, with fewer than 100 operational in all of Canada.

“Heretic Spirits is an experiential company. We like to create products that... get our audience to try something they haven’t tried before,” said Scott.

“I love to cook. I love to experience new foods, new tastes and smells,” he said. “Spirits, or wine, or beer, they kind of go together.”

Scott said he spent 28 years working in advertising, but lost his passion for the work a few years ago. He was eager to turn his attention to creating a product people would love.

“The team we have, really understand the spirits business and how to work with it, so it just made perfect sense to us,” said Scott.

The name for the spirits comes from the group’s desire to set themselves apart.

“A heretic is someone who thinks differently than everyone else,” said Scott. “We have some plans that are going to be really unique to the spirits industry. I don’t think they’ve been done anywhere else.”

While the distillery is currently open Fridays from 5 to 9 p.m. and Saturdays from 1 to 5 p.m., Scott said they’re planning to move into special events, which will be announced exclusively to their followers on social media.

“Today, I’m here cleaning the still up. Jeremy’s prepping for the weekend. My brother (Chris) is running operational numbers. We’re real,” said Scott. “We spent the first year and a half doing lots of drawings and coming up with spreadsheets and plans. Now, we’re actually doing it. It’s really fun.”