A skilled trade apprenticeship led this entrepreneur to start a business 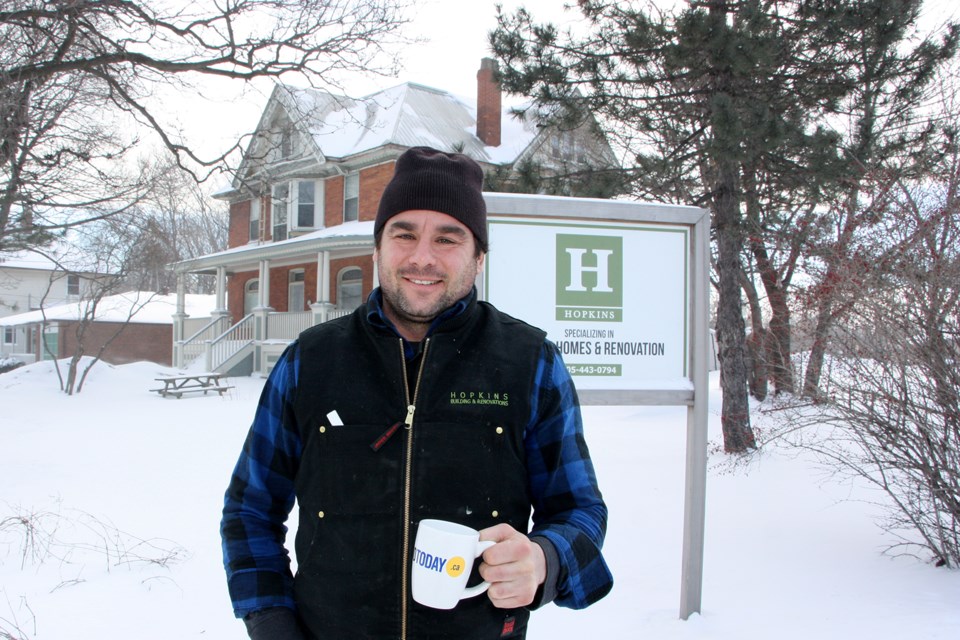 Zachary Hopkins, owner of Hopkins Building and Renovation, just finished rebuilding this rounded porch on a home on Minnesota Street. Hopkins is the subject of todayâs Midweek Mugging. Erika Engel/CollingwoodToday

A local business owner who picked his trade as a teenager wouldn’t trade his career in construction.

Zachary Hopkins started his carpentry apprentice at 16 years old, and now owns Hopkins Building and Renovation based in Collingwood.

Hopkins’ crew does a variety of renovations and builds, but he particularly likes the jobs with a lot of custom mill work.

For instance, a recent project had him restoring a curved porch on a century home on Minnesota Street. The work included pillars, railings, stairs, and raised panels, all done in wood in a classic style suitable for a century home.

“The most gratifying part of [the work] is a job that’s not run of the mill,” said Hopkins, adding he likes a challenge and something that takes extra effort and thought to execute. “It’s good to get acknowledgement … a happy customer … for something that’s out of the box.”

Hopkins is a Collingwood Collegiate Institute graduate, he was part of the National Ski Academy in high school, at that time academy students also attended CCI. He remembers doing hands-on projects with his dad and uncle as a child, and said he knew carpenter was the right career choice for him.

He worked as an apprentice under a custom home builder named Ken Vogel, the owner of Vogel Construction, and recently the purchaser of the Victoria School Annex property.

Hopkins has been running his own business since 2008 doing custom renovations, some framing work, project management, and general contracting.

One of his first projects as a new business owner was the renovation of the clubhouse at Toronto Ski Club, which he said was an ambitious project to start with.

“It was a serious learning experience, but it turned out well in the end,” said Hopkins.

Recently, Hopkins took on a restoration of another century home on Fifth Street. He and his crew helped restore the interior, which included ordering custom baseboards and crown molding to bring the home back to the classic style.

“It’s getting busier for us for sure,” said Hopkins, adding his crew was swamped this summer.

He said the Collingwood market is unique because many of the homes are second properties for the homeowners. In a lot of cases, he’s asked to turn a vacation residence into a full-time home by updating the finishes, increasing the size, and making the space more functional.

In other cases, his crew will go in to finish a basement in a newly built house in a subdivision, or customize a home built by a developer.

The demand for skilled trades like a carpenter is on the rise, and Hopkins said it’s hard to find skilled labour, or even those interested in an apprenticeship.

His team includes four carpenters, and he tries to always include an apprentice on the team.

“I try to support anybody that has an interest in the trade,” said Hopkins. “There’s not as many young guys that want to get into it … the trades in general are kind of hurting.”

As a business owner who came from an apprenticeship in a trade, Hopkins now encourages other students to consider that career path.

“It’s a reasonable option, with good pay and lots of work,” said Hopkins. “You’ll always have a job, and it’s a good way to start out and eventually you can have your own business … and you get paid to learn it.”

Heavy water, lightbulb idea
Aug 15, 2018 1:00 PM
Comments
We welcome your feedback and encourage you to share your thoughts. We ask that you be respectful of others and their points of view, refrain from personal attacks and stay on topic. To learn about our commenting policies and how we moderate, please read our Community Guidelines.