Three initiatives will be accepting applications this year – two programs geared towards the creation of attainable housing and an additional program focused on encouraging restoration of existing buildings
May 9, 2021 2:30 PM By: Jennifer Golletz 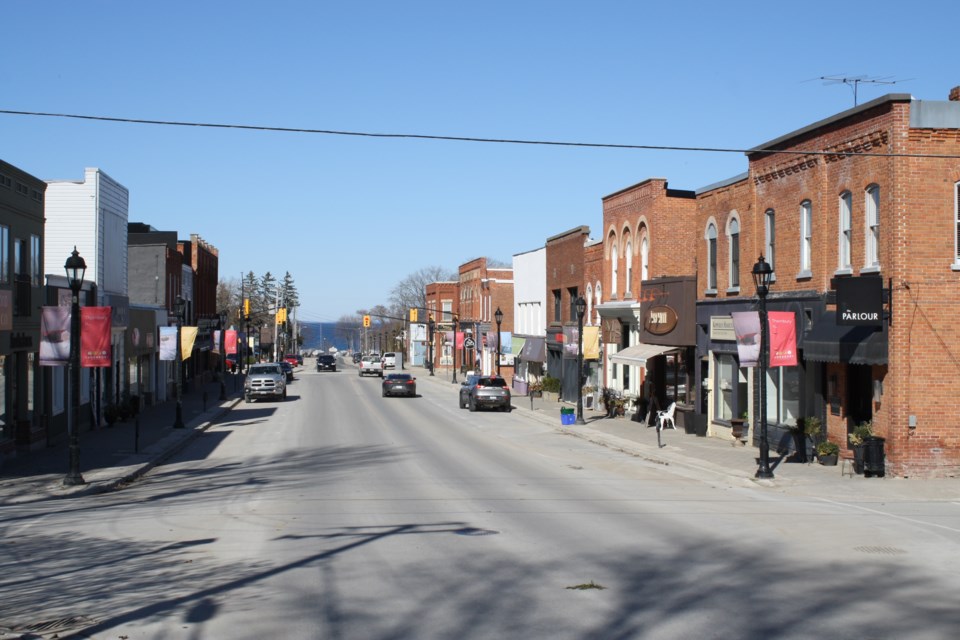 The Town-wide revitalization CIP - building facade and signage grant is intended to promote rehab, restoration and improvements on existing buildings and will also encourage the restoration of heritage buildings and their historic attributes. Jennifer Golletz/ CollingwoodToday

Through its two new Community Improvement Plans (CIP), the Town of the Blue Mountains (TBM) is looking to attract more attainable housing and revitalize its historic buildings.

“Council has adopted two CIPs. Both plans effectively create a toolbox of incentives to achieve the objectives outlined in each plan,” said Nathan Westendorp, director of planning and development services for TBM.

TBM staff began developing the two CIPs in early 2020. WSP consultants were retained to assist in the development of the Housing within Reach CIP and to review TBM’s existing CIP from 2011.

“We've had CIPs in the past and the council is well aware. But unfortunately, for various factors and reasons, and those CIPs and the programs within that were never activated,” Westendorp said, adding that this will be the first year TBM has administered a CIP program.

According to Westendorp, after council’s approval of the CIPs in January, no Local Planning Appeal Tribunal appeals have been received and the CIPs are now in effect.

During a recently held council meeting, staff provided their recommendations on which CIP initiatives could be established this year.

TBM council adopted the staff’s recommendation of implementing three initiatives under the CIPs:

The Development Charges Grant Equivalent program is intended to offset the charges that are incurred through the development application and approval process.

The CIP applicant would pay the development charge and the grant funds would be distributed upon completion of the project. In order to be eligible, the project must focus on the development or redevelopment of a property that will result in a minimum of two new attainable housing units.

The total grant amount is based on the value of the development charges applied to the attainable housing units, to a maximum of $250,000.

The second program under the Housing within Reach CIP being offered is the Additional Dwelling Units program.

The grant aims to provide financial assistance to improve, convert, legalize or construct new attainable housing units. Applicants are eligible to apply for a maximum value of 50 per cent of project costs to a maximum of $15,000.

Through the town-wide revitalization CIP, TBM will be moving forward with the Building Facade and Signage Grant program. This program is intended to promote rehab, restoration and improvements on existing buildings and will also encourage the restoration of heritage buildings and their historic attributes.

Projects can include the repair or replacement of windows, masonry and brickwork, eaves, parapets, awning or canopies, painting or cleaning treatments, new lighting or storefront displays. Applicants can apply for 50 per cent of eligible project costs up to $10,000. Properties designated under the Ontario Heritage Act may be eligible for an additional $5,000.

In December, council approved that funds for the CIP reserve would come from the proceeds of four municipal properties sold by the town from 2017 to 2020, which totalled $433,672.24.

With the completion of the CIPs, Grey County has also transferred $20,000 to the town to assist with funding.

Unless other funding sources are confirmed to sustain the CIP reserve fund, only $153,672.24 would remain in the reserve for future years until it is re-evaluated through the 2022 budget process.

Moving forward, TBM staff will proceed with creating application materials and agreement templates; launch an intake period of 12 weeks and proceed with application processing. The final applicants will be presented to council for approval.

“This approach ensures staff and then council both have the benefit of reviewing all the applications at the same time and can direct each year's funding toward the CIP applications that council thinks will best meet the goals and the objectives of CIP,” Westendorp added.