In a response to community safety concerns, Grey County will be installing a traffic calming pilot in the late spring of 2021
Oct 23, 2020 5:00 PM By: Jennifer Golletz 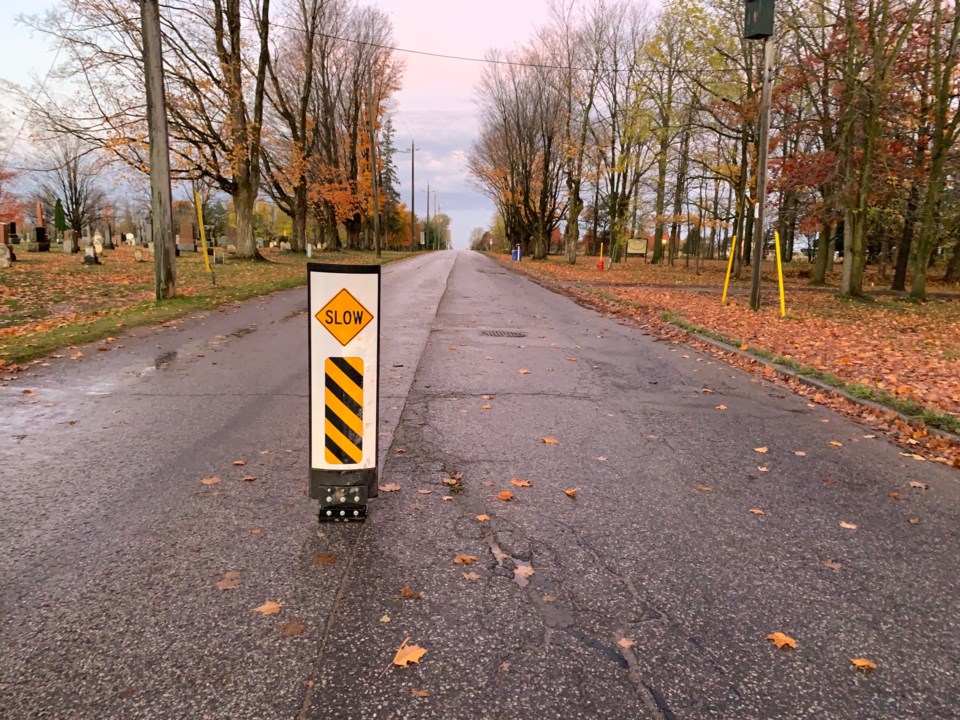 Pictured is an example of the traffic calming measures Grey County plans to install on Grey Road 13 through the hamlet of Kimberley. Contributed photo.

Residents in Kimberley, a hamlet in the municipality of Grey Highlands, say they have had enough of the traffic speeding through their small community.

“Grey Road 13 has become a very busy north/south arterial road. Children, seniors, animals both feral and domestic, pedestrians of all ages and cyclists are vulnerable to oncoming traffic, and the speed with which drivers encounter Kimberely,” stated the community-based Kimberley Public Safety Committee in a letter to Grey Highlands authorities.

The committee, led by residents Julie McEwan, Stacie Howe, David Nelms, Mary Ferguson and Michele Chaban, was formed over a year ago in an effort to address the ongoing safety issues on Grey Road 13.

“Our community group is concerned about the lack of pedestrian infrastructure to safely move within the village as well as traffic calming initiatives to offset this increased vehicle traffic and speeding,” stated the letter.

In February of this year, the committee collected 120 signatures in a petition asking for action to be taken to reduce the frequent speeding issues.

“It is estimated that 6,000 bicyclists show up from April to October at the Kimberley General Store as a destination from Collingwood,” noted Michele Chaban, committee member. “This is remarkable and a sign of success for business and development in our area. At the intersection of all these wheels meeting with pedestrians, hikers and four-leggeds, we have a potential accident zone. We are trying to prevent harm coming to others so we are asking for traffic calming areas as well as pedestrian walkways in Kimberley.”

Earlier this month, Grey County council approved the installation of traffic calming measures in Kimberley, and according to Pat Hoy, director of transportation for the county, these measures will be installed in the late-spring of 2021.

“Grey County has noticed consistent speeding in our hamlets,” Hoy said. “As the majority of driver behaviour is not directly changed via the use of signs but rather geometric items that make you ‘feel’ like you should slow down, we wanted to conduct a traffic calming pilot.”

According to Hoy, the county will be installing traffic calming measures in the late spring, which will remain in place for the summer months.

“We are anticipating the installations will be on the centreline of the road,” Hoy said. “We are not sure if we can install the white and black [posts] at the edge of the road as our neighbours have noticed that those can make it difficult for farm equipment,” Hoy explained.

Traffic counters will be recording the speed of all vehicles on the road throughout the pilot.

At the same time, Grey County has reduced the speed limit on the main road through in the neighbouring hamlet of Eugenia from 50 km/h to 40 km/h.

“By reducing Eugenia to a 40 km/h but installing a traffic calming pilot in Kimberley while it’s still posted at 50 km/h, we will have data to compare how effective each method is at reducing speeds,” said Hoy.

The county will be monitoring the two communities throughout the summer months and will compare how each method has helped to improve road and community safety. From there, county staff are expected to provide further recommendations to the county council for possible long-term solutions.

Grey County brings back familiar face as warden for 2021
Dec 1, 2020 7:00 PM
Comments
We welcome your feedback and encourage you to share your thoughts. We ask that you be respectful of others and their points of view, refrain from personal attacks and stay on topic. To learn about our commenting policies and how we moderate, please read our Community Guidelines.