New parking restrictions will be initiated on 10 roads in TBM, including Pretty River Road and 12th Sideroad
Jan 28, 2021 1:00 PM By: Jennifer Golletz 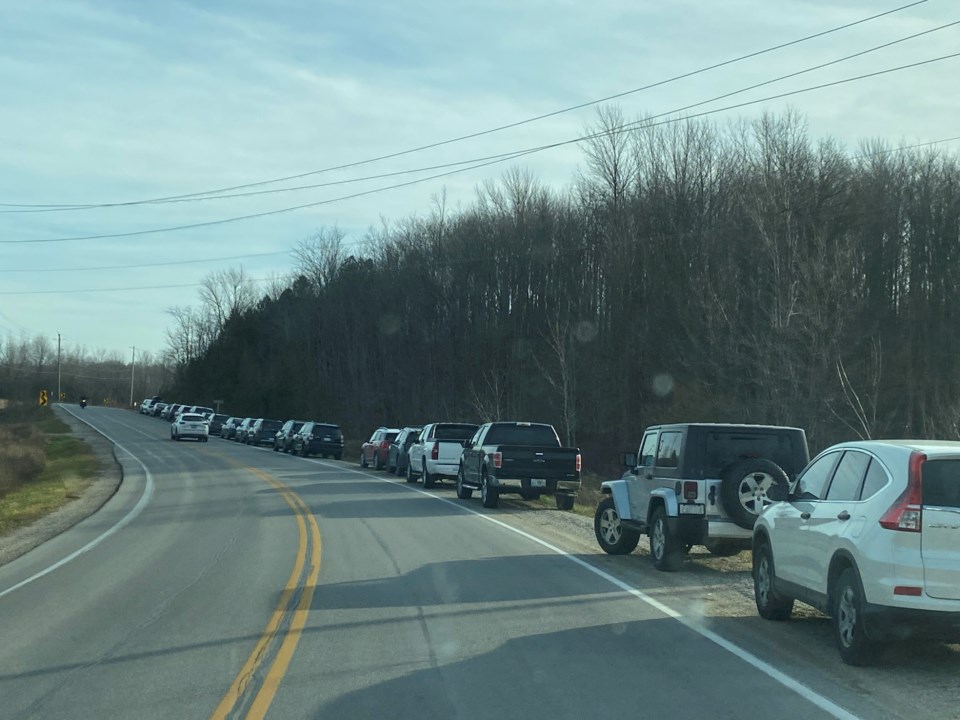 Cars illegally parked along Grey County Road 2 near Metcalfe Rock in the Town of the Blue Mountains. Jennifer Golletz/ CollingwoodToday

After numerous complaints of dangerous parking incidents around town, The Town of the Blue Mountains (TBM) will be introducing several new no-parking areas.

“It is not unusual, particularly on weekends, for there to be up to 70 vehicles parked on both sides of the road in the vicinity of the access trail entrance,” stated TBM resident Peter MacGowan, in a letter to council.

MacGowan said he has a growing concern about the parking taking place on Pretty River Road, noting that some days there are so many parked vehicles that traffic cannot get through.

“What has once been a quiet road in the winter months has now become a parking lot for people to park and use as a recreational outlet,” said Al.

“This has caused us great concern as the top of the road at any given time is very slippery and steep. We have found ourselves in situations where we cannot get out of our driveway due to cars parked randomly on each side,” she continued.

Al added that her biggest concern is that emergency vehicles may have a hard time accessing laneways in the event of an emergency.

“Emergency vehicles are unable to navigate between these parked vehicles,” Al said. “Precious time may be lost.”

Shawn Carey, director of operations for TBM said the town has been experiencing parking and traffic issues all across the municipality.

“We have been working with some of our community partners, one being Grey County, on some of these areas, to look at additional parking lots and parking areas and where it makes sense to put overflow vehicles where there is no parking,” Carey said.

In regards to Pretty River Road, MacGowan suggests that the town should consider making use of the old road allowance that follows the old route of the Valley Road.

According to Carey, town staff are undertaking a broader review of parking town-wide, and a staff report and recommendations will be coming forward to council in the Spring.

In the meantime, at a council meeting held on Wednesday, TBM council members voted in favour of amending the town’s parking bylaw to add several new ‘no parking’ areas, which include:

Over the coming weeks the town will be installing no parking signs at these locations and the parking bylaw amendments will remain in effect until April 2021.

Carey added that while town staff are trying to address high-risk areas, signs and restrictions are not always effective.

“Even with no parking signs, we're still experiencing the same challenge in other locations,” Carey said. “Metcalfe rock being a prime example where people are continuing to park even when there are no parking signs.”

TBM councillor Andrea Matrosovs, who often voices her concerns over the Metcalfe Rock-area, agreed, adding that the fine for violating the town's parking bylaw may not be enough.

“The problem we're hearing is that the amount of the ticket is like paying for parking in the middle of the city,” she said. “Some people are just not treating it seriously.”

Carey also pointed out that individuals can still receive a ticket in areas where parking is permitted if their vehicle is blocking access for emergency vehicles or essential service vehicles such as snow plows or propane service operators.

“I do want to say a lot for our bylaw officers who are out there trying to patrol all these areas and manage these hazards. This is something that we are taking seriously,” Carey added.

COVID-related complaints are on the rise in Grey Highlands
Apr 22, 2021 8:00 AM
Comments