“This is an environmental catastrophe in the making,” says local group 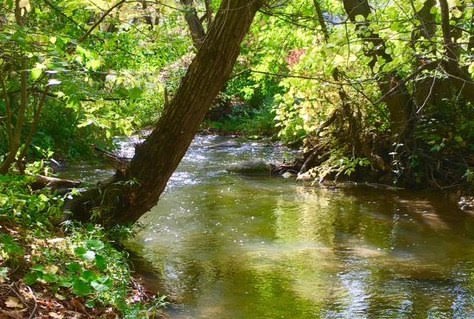 Many who are drawn to Collingwood appreciate its biodiversity and the area’s natural beauty. The Silver Creek Wetlands are an integral part of the landscape with many animals and creatures making this cold-water habitat their home.  The river itself is a spawning ground for rainbow trout, brown trout and chinook salmon and the area is home to a large population of great egrets.

Paul Neate, spokesperson and local resident is a member of Save Silver Creek Wetlands, a community group focused on preserving the integrity of this area. The Wetlands is at risk from a proposed development of 180 homes on 49 hectares of property bordering Silver Creek.

Silver Creek emerges from Lake in the Clouds, runs down the escarpment and passes through the Silver Creek Wetlands before entering Georgian Bay. It is the last remaining intact coastal wetland on the south shore of Georgian Bay and the most biologically significant area in the Town of Collingwood. Some of the bird, plant and fish species found here are endangered, threatened or have been identified as of special concern by the Nottawasaga Valley Conservation Authority.

According to Neate’s research, Canada has the most wetlands of any country in the world, yet we’ve destroyed 70% of them. “So we’re now fighting to save what remains,” he says.

In 2007, a developer purchased the land intending to have the zoning changed from Rural (farming), Environmental Protection to Residential R3 (five times the density of the surrounding west community), Commercial, Recreational, and Environmental Protection.  The Silver Creek area is already prone to flooding. The worry is how the environment will fare when more mixed building happens here.  A separate development is occurring at the section closest to Georgian Bay, which is where the water needs to escape to.  “They call it a wetland for a reason”, says Neate. The concern is that the wetlands will be damaged, homeowners will experience even more flooding and wildlife and the stock of fish will disappear.

“The potential environmental impact is horrendous,” says Neate. “Any development right next to this Provincially Significant Wetland must be designed and undertaken comprehensively and sensitively…and subject to clearing all necessary conditions set out by the Conservation Authority.“

Plans submitted by the developer fall well short. “We looked at all the plans they submitted. Their original development proposal would annihilate the wetlands, not coexist with them,” he says.

Why does this matter? “This is an environmental catastrophe we can’t undo,” Neate warns. “If it’s allowed to happen, you can’t go back and rebuild the wetlands, they will be gone—whatever animals live in there, whatever fish go up the river, the deer, it’s just not going to be habitable.”

The problem is not unique to the area, sadly. Several other communities are having this same fight, trying to stop dangerous building in the middle of a flood plain—or at the very least, ensure developers are responsible and thoughtful in their approach, devising plans that respect and conserve the wetlands. Developers are often quick to assure residents they’ve consulted environmental engineers, but their plans indicate otherwise.

“You can’t stop nature; all that water has got to go somewhere.  Just hoping you’ve made the plan right is not good enough because there are consequences for the surrounding neighbourhoods. They will be flooded if the water is channelled away from the new development and it just pours into the old one,” he says.

The long-established community Neate lives in is located well away from Silver Creek, yet it already experiences annual flooding. “From an environmental perspective, our community is concerned,” he says. “If you go onto our Facebook page, you’ll see some of the pictures neighbours have posted showing just how badly the area floods.”

Residents recognize they can’t totally stop the development because the Town, due to an OMB decision in 2014, has already made an Official Plan Amendment deeming a portion of the land developable, subject to specific conditions. “The things we hope to achieve is ensure that any further planning approvals fully protect this irreplaceable asset and can hold the developer accountable to build properly with the least amount of damage,” he explains.

Engagement comes at a huge financial cost. To be able to participate in the Local Planning Appeal Tribunal (LPAT) process, Save Silver Creek Wetlands has requested Party Status in any further hearing proceedings. It’s expensive to do and the group needs financial contributions to be able to sustain the fight.

“We’re a community, we’re self-funded and we’re on the cusp of achieving that all important Party Status. We want to be there to have proper input into the planning process and hold the developer accountable…but it’s an extraordinarily expensive process,” says Neate. Having Party Status means residents get a seat at the table and effective input.   We can thereby ensure there are neighbourhood consultations with the developer and impact outcomes.

As of now, the growth plan for the Town of Collingwood includes a significant increase in the number of homes in the area over the next ten years. The Province has determined that the population of the Town of Collingwood will increase by nearly 50%.  Development that does happen needs to be accomplished responsibly so that areas that were once protected and deserve continued protection remain that way.

There are already at least four separate developments proposed along Silver Creek, showing just how big an issue this is for the area. Neate says residents need to band together. “This is not just our fight,” he says. “Our community is only the poster child for all the various communities around the Silver Creek Wetlands that extend all the way to Blue Mountain.”

All the community members involved in Save Silver Creek Wetlands are volunteers and any money raised has come from contributions from the community. “It’s tough times economically, it’s not a good time to have to do this, but the community feels very strongly about it and that’s why we’ve been working so hard. We are trying to do what is right without any kind of financial benefit. The Silver Creek Wetlands are undeniably a community asset and provincially significant; any negative impact to the wetlands will negatively impact Collingwood as a whole,” he says.

It’s a community that many call home. Neate hopes residents will have a broader understanding of what is at risk and he invites everyone to join their fight against inappropriate development.

“It’s the folly of man to develop everything. We must do our best to coexist with nature.”

To join the fight, visit and join Save Silver Creek Wetlands on Facebook.  Contributions, small and large, are welcome though our GoFundMe page.