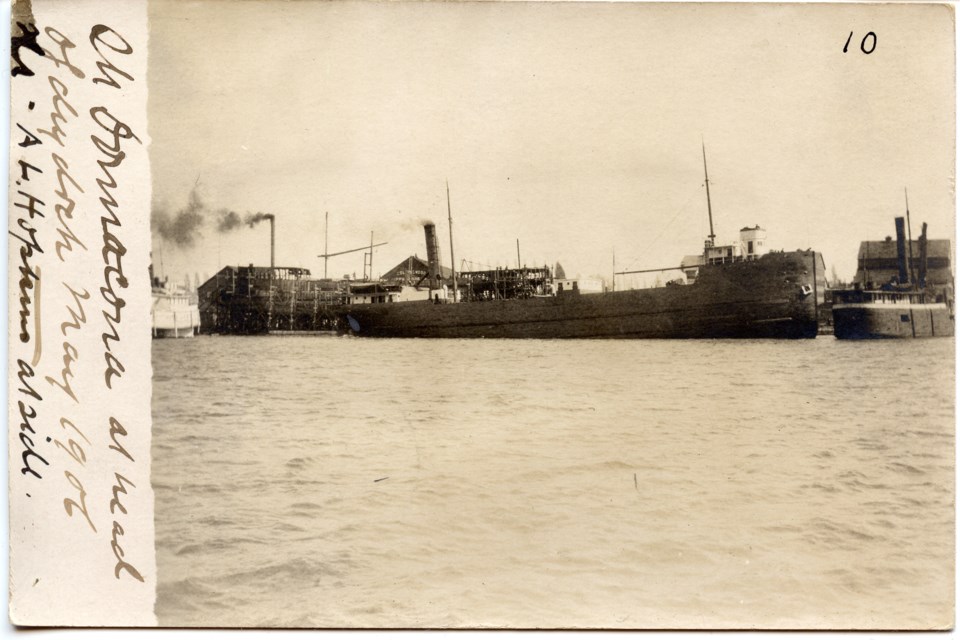 In May 1906, Collingwood received a visit from steamers Donnacona and A.L. Hopkins. The large vessel in the centre of the photograph is the Donnacona.

This ship was built by Wood, Skinner & Co. in Newcastle, Great Britain, in 1900 and was ordered by Hamilton & Fort William Steam Navigation Co. Donnacona was designed specifically for service in the Great Lakes.

The last owner of the vessel was Canada Steamship Lines, which became Canada’s largest marine company and still thrives today. Unfortunately, on Oct. 17, 1915, the rudder from the Donnacona was carried away in a storm on the Atlantic, causing the ship to sink.

To the right of Donnacona is the steamer A.L. Hopkins, which was built in 1880 by Morley & Hill in Marine City, Michigan and rebuilt in 1899 in Toledo, Ohio. Not much is known about the vessel except that it became waterlogged on Oct. 4, 1911, and stayed adrift on Lake Superior until it finally sank Oct. 17, 1911.

The inscriptions on the side of the photograph reads: “Str Donnacona at head of dry dock May 1906 / Str A.L. Hopkins at side.”