In this week's Remember This, a colourful account of what one newspaper called "the prettiest launch ever held in Collingwood."
0
Jan 20, 2019 9:30 AM By: Remember This? 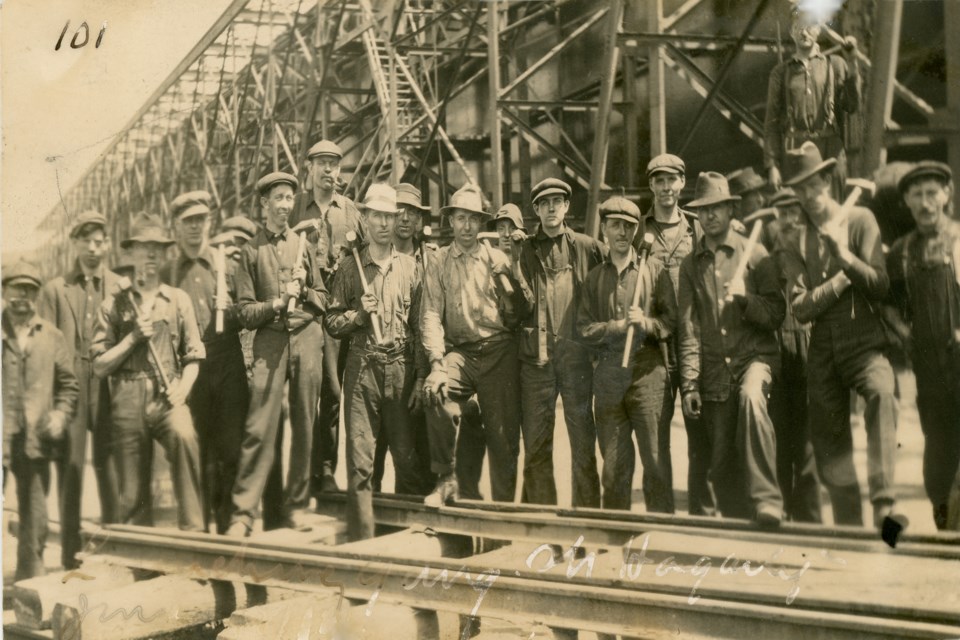 These sledge-hammer wielding men were part of the team that launched a ship in Collingwood on June 18, 1914. Huron Institute 101; Collingwood Museum Collection X969.637.1 Contributed photo.

This week’s photograph features twenty members of the launching gang that were present at the launch of Hull 42, J.H.G. Hagarty, at the Collingwood Shipbuilding Company on June 18, 1914. With sledgehammers in hand, these men would have been instrumental in the activities that led to the launch as described by a local newspaper:

“A visitor to Collingwood would have thought that a circus must be in the town to see the crowds that filled the streets on Thursday morning, all of whom about noon wended their way towards the Shipyard and the Docks in order to witness the launching of another lake leviathan that stood majestically on the stocks alongside Dock No. 2 on the premises of the Collingwood Shipbuilding Company. The launch was fixed for 2:30 p.m. and everything was ready at that hour, but the launch was held up for fifteen minutes to admit of the arrival of Mr. Sing, who came over in the new government yacht and arrived about 2:45.

Immediately after his arrival, the signal was given and the immense boat started to slide gracefully down the well greased ways. Both ends struck the water at once, the prettiest launch ever held in Collingwood. Two slight rolls and the vessel was at rest on her native element.”

Incidentally, the circus was in town earlier in the week and was the subject of last week’s Remember This feature.

If you recognize any of the men in today’s photograph, please contact Collingwood Museum staff.Remember This is a weekly series of historic photographs submitted by the Collingwood Museum to CollingwoodToday.ca. These photographs were originally collected and documented by the Huron Institute in an historical catalogue entitled Huron Institute Paper and Records: Volume III. Much of Collingwood’s early history has been preserved due to the dedication and foresight of the early museum’s founders, namely its secretary-curator David Williams, upon its establishment in 1904.

This photo helped solve a Collingwood Museum mystery
Dec 16, 2018 9:00 AM
Comments
We welcome your feedback and encourage you to share your thoughts on this story. We ask that you be respectful of others and their points of view, refrain from personal attacks and stay on topic. To learn about our commenting policies and how we moderate, please read our Community Guidelines.