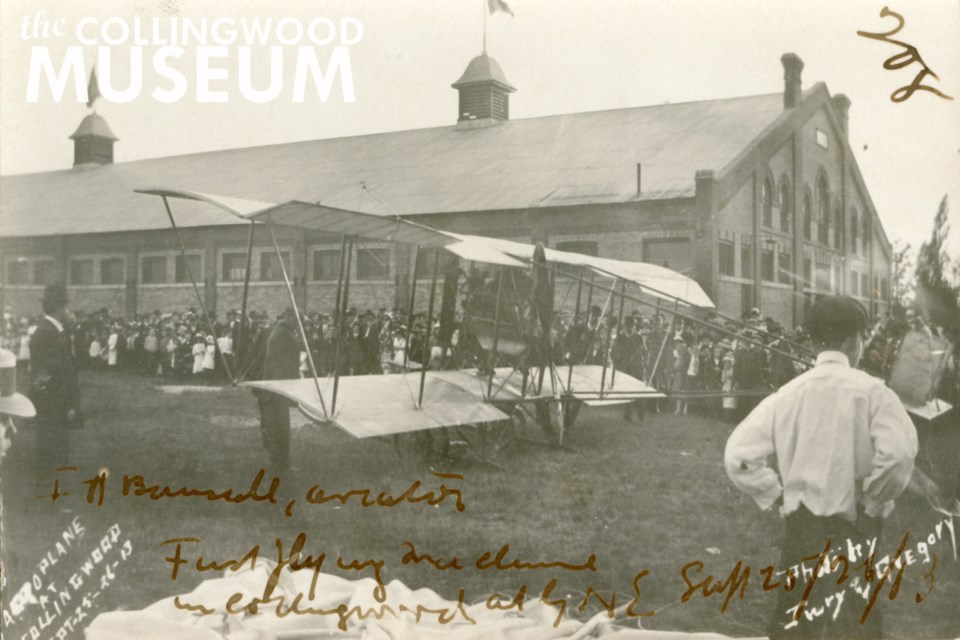 This weekend marks the 164th-annual Great Northern Exhibition (GNE). Over the fair’s long history, there have been many special attractions for local residents to enjoy.

Today’s featured photograph captures what would have been a memorable moment for everyone in attendance in 1913 – the arrival of the first “flying machine” in Collingwood.

An aeroplane surrounded by a large crowd is pictured on the east side of the brick exhibition building, presently known as the Collingwood Curling Club. This was the third building to be used by the fair on the historic property.

Come to the Fair by Marie Cruickshank offers a little more information about the 1913 event:

“In 1913, the Great Northern Exhibition offered an outstanding feature, namely airplane flights. Record crowds were in attendance that year to marvel at this wonderful machine. All went well in spite of a fire in one of the cylinders. This event proved so popular that it was scheduled for the 1914 fair, but alas, an accident in Lindsay forced its cancellation.” (24)

Another account of the 1913 attraction, written by Scotty Carmichael, appears in Reflections: An Historical Anthology.

Unlike Cruickshank, Carmichael draws attention to the GNE’s enterprising effort to bring the young aviator as an attraction. According to this account, the pilot was paid $25 to fly over the fairgrounds and to land as close as possible. The plane was brought to a stop half of a mile away.

Carmichael records interested fair attendees chased after the plane, leaving the fair’s premises to the severe disappointment of the midway and concession operators. The aviator, on the other hand, made out just fine, charging $1 per ride.

The presence of the aeroplane on the GNE property in today’s featured photograph is curious given the latter account. The photograph proves that the aeroplane did make its way to the GNE grounds at some point between September 25 and 26, 1913.

If you have any information to share about today’s featured photographs, or the history of the Great Northern Exhibition, please contact Collingwood Museum staff at mshaw@collingwood.ca.

Here's how Collingwood marked Canada Day in 1927
Jun 30, 2019 11:00 AM
Comments
We welcome your feedback and encourage you to share your thoughts. We ask that you be respectful of others and their points of view, refrain from personal attacks and stay on topic. To learn about our commenting policies and how we moderate, please read our Community Guidelines.