A clocktower with no clock

In this week's Remember This the Collingwood Museum takes you through the construction, destruction and rebuilding of the town hall and clock tower.
Jul 1, 2018 10:00 AM By: Remember This? 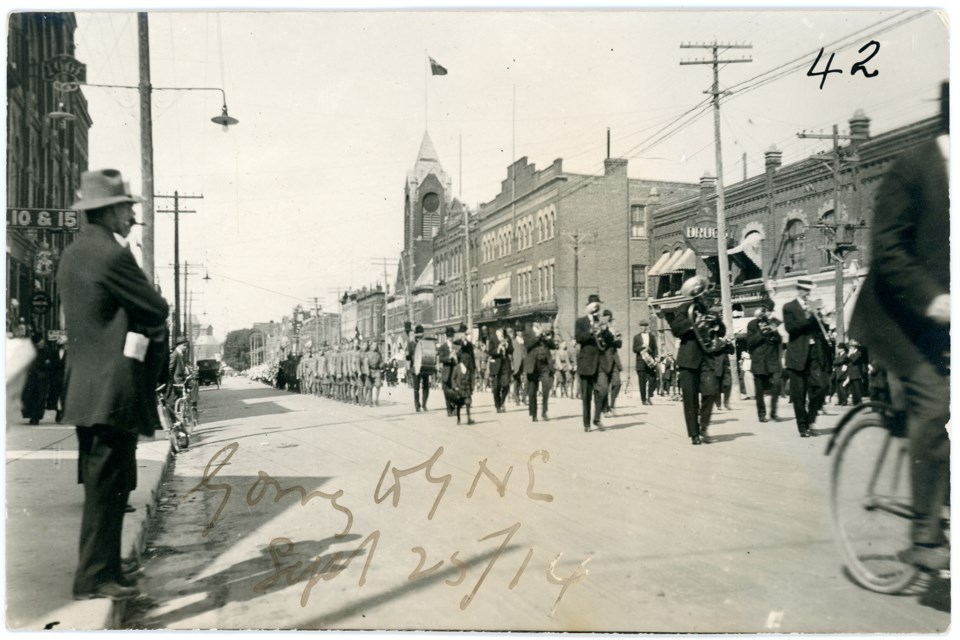 The Great Northern Exhibition parade passed by the new town hall, rebuilt in 1891 after a fire destroyed it. Huron Institute No. 42, Collingwood Museum Collection X970.731.1

This week's Remember This photograph is the last in the Great Northern Exhibition parade series from September 25, 1914 and features the Citizens’ Band with the town hall in the background.

In 1889 C.J. Gibson and Henry Simpson of Toronto were appointed to design a new town hall for Collingwood. At the end of its construction, the new town hall had a two-day grand opening in June, 1890, for which everyone dressed up and enjoyed the Marciano Italian Orchestra and a grand ball.

Two months later, a fire broke out that affected both the original structure on the site and the newly-built town hall. The inadequate structure previously housing the town offices had to be sacrificed to save private property, and the new town hall was severely damaged, but was immediately rebuilt.

Local architects Fred T.Hodgson and Thomas Kieswetter undertook the reconstruction, making several improvements to the original plan. The rebuild was completed in 1891. Surprisingly, the town hall tower remained without a clock until 1951, when a clock was donated by Mr. and Mrs. Frank Courtice, the namesakes of today’s Courtice Crescent on Collingwood’s west side.