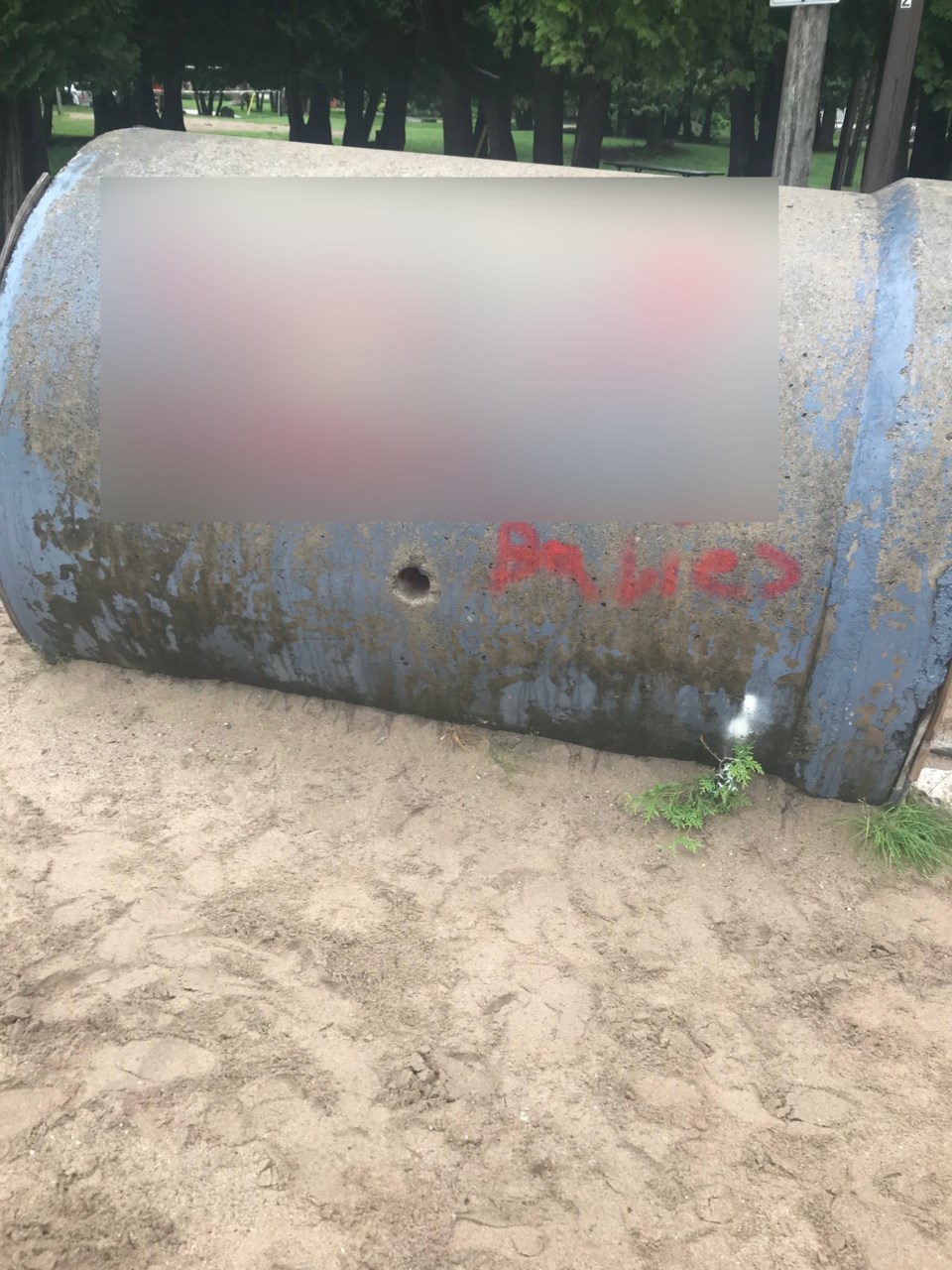 The graffitti has been blurred because of the racist, profane content included. This was one of many playground structures tagged overnight with racist, homophobic, violent, profane messages and images. Contributed photo

Constable Martin Hachey, spokesperson for the local OPP detachment, said the investigation is ongoing, but the police won't call the incident a hate crime without knowing the motivation of the person or people who committed the vandalism.

"We have to determine if it was a hate crime or not – in terms of, if it was motivated by hate," Hachey told CollingwoodToday. "It's a possibility it was. We don't want to go in that direction until we confirm 100 per cent."

Police did recover forensic evidence at the playground during their on-site investigation in the morning following the incident. They have also put out a public call for surveillance video footage from surrounding private property.

"I think, in the end, what we have to find is the person or persons that committed the crime itself and see what their motivation was," said Hachey.

The Criminal Code of Canada indicates it is a crime to publicly incite hate, and to wilfully promote hate. It defines public incitement of hate as anyone who communicates statements in any public places that incite hate against an identifiable group.

A conviction of incitement of hate can carry a prison sentence of up to two years, according to the Criminal Code of Canada.

According to the code, a hate crime is one that intimidates, harms, or terrifies a group of people.

The second of the Criminal Code of Canada dealing with mischief does allow for longer terms of imprisonment for a conviction of mischief that is motivated by bias, prejudice or hate.

A conviction of mischief motivated by hate can carry a prison sentence of up to ten years, according to the Criminal Code of Canada.

"The words and sentences used would lead us to believe the possibility this was hate-motivated," said Hachey. "We have to process our investigation ... if we lay charges, the Crown will decide what type of prosecution police can file against the person or persons who did this particular crime."

In a news release issued this weekend, OPP said the acts of vandalism at Sunset Point playground would "not be tolerated."

"The OPP takes all allegations of criminality seriously and will conduct a thorough and exhaustive investigation, holding those responsible to the fullest extent of the law," stated the OPP news release.

Following the discovery of the graffiti on Friday, local residents called on police to treat the vandalism as a hate crime.

The graffiti was removed and covered up by the town, and a grassroots campaign that began on Friday saw a crowd at the playground by Saturday morning painting all the play structures with phrases and symbols of love and inclusivity.