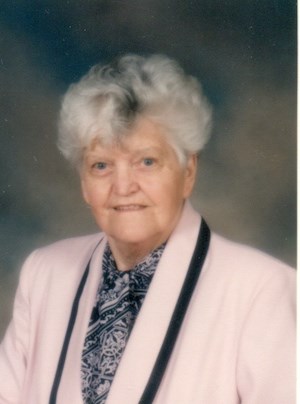 Today, Wednesday December 30, 2020, we say farewell to Helen Maude Milton, nee Isherwood, better known as Bid or Biddy to family and friends.  Bid was our Mom, our Grandmother, our Great-Gran, a cousin and an aunt.  Bid was born April 15, 1922 in Trenton, Nova Scotia to Maggie Greenhall and Fred Isherwood.  After moving to Ontario, the Isherwood family settled in the Toronto West area. Bid was the middle of five children and has been predeceased by sisters Alice (Gibney), Renie (Ball), Margaret, her brother Charles and her lifelong friend Elsie Woodend-Forester.  On September 6, 1941, Helen Maude Isherwood married Edward Thomson Milton and were together until his passing in November, 1994.  Helen was Mom to Susan (Don Stewart), Meg (Robert Stainton) and Frederick (Helen). She was a loving Gran to Sarah, Lynn, Ted and Michelle Jessop; Shane, Loretta  and Sean Stainton; Angela and Nelson Domer and Amy and Shawn Taylor.  She was a loving Great-Gran to Michael Milton, Daniel and Gracey Jessop and Mya and Amelia Stainton.  After living in a number of places, Mom’s final years were in Stayner at Blue Mountain Manor and then Sunset Manor in Collingwood. We thank both residence for their loving care of our Mom during these past years.  Private arrangements at this time with interment at Old St. John’s Churchyard Cemetery at a later date.  If desired, a donation to the charity of your choice would be appreciated by Bid’s family.