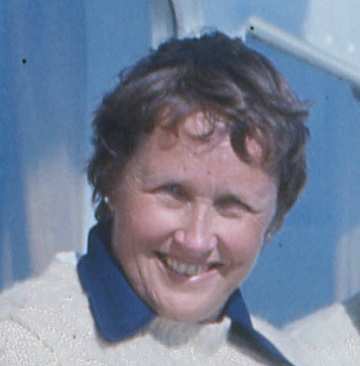 Left us peacefully in her sleep after living a full and rewarding 91 years. Predeceased by her loving husband of 61 years, T.D. Loving mother of Grant, Ian (Margy), Bruce (Stacey) and Ken (Kim). Fondly remembered by her eleven grandchildren and five great-grandchildren. Dear sister of Donald Grant (Gwen).

Alistair grew up in ‘New Toronto’ (Etobicoke) and was one of four women to graduate with a Bachelor of Commerce degree from the University of Toronto. After marrying T.D., whom she met in her teens among the rocks on Georgian Bay, they set off on a journey that would have them living throughout Canada and travelling the world. However, the winds of Georgian Bay would always bring them back to the cottage every summer, which in many ways was their roots which they passed onto their children and grandchildren. Her ashes will be released into the blue skies and warm waters of the Bay this summer so she can rest at home with T.D.

A private family service will be held in the Fawcett Funeral home, Collingwood Chapel, on Friday December 18, 2020, with a video of the service to be released to share with her loving extended family and friends. In memoriam donations to the Georgian Bay Land Trust would be appreciated by the family.