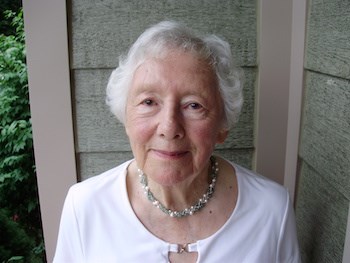 Mary was born in the small village of Melton Constable in Norfolk, England. She moved to South Africa after WWII with her husband and family, and after 9 years there settled in Canada in 1957. After living in Thornhill Ontario, Mary and Peter retired to Thornbury, Ontario. Mary spent her final years in Chartwell Retirement Residence, where she felt safe and cared for.

Mary enjoyed playing tennis in her younger years, and loved watching tennis on TV in her later years. She enjoyed gardening, reading and visiting with family and friends.

Thanks to all the care given to her at Chartwell in Collingwood over the past 10 years, and to Campbell House Hospice.

Cremation has taken place. Due to COVID, a celebration of life will take place at a later date.

Donations in Mary’s memory may be made to Hospice Georgian Triangle - Campbell House, or to a charity of your choice.