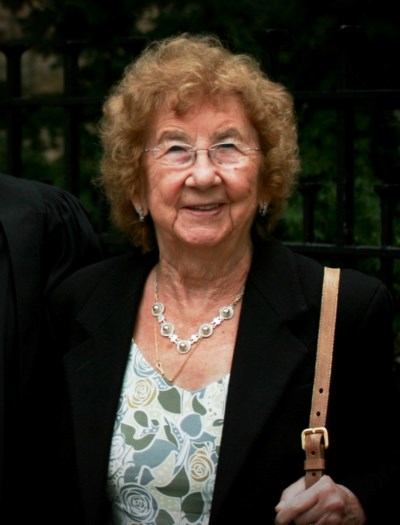 Died peacefully on Wednesday December 30, 2020 at her Stayner home surrounded by her family at the age of 93.  Trudy, beloved wife of the late Bill Ainley for over 67 years. Loving mother of Simon (Sharon Hanna), Mike (Karen Bloore), Sue (Geoff Meadley), the late Jonathan (daughters Rachel & Rebecca), Terresa and Gloria.  Cherished grandmother of Sean (Maria), Alexandra (Rene), Nicholas (Erin), Travis (Regan) and great grandmother of Samuel, Annabelle, Adriana, Jackson, Ivy and Lou. Trudy also will be missed by her family and friends in the United Kingdom and abroad.

Born in Austria, Trudy met her husband, Bill as a school girl in Otley, West Yorkshire. She trained and nursed at Leeds General Infirmary between 1945 and 1949. In 1958 Trudy and Bill set course for a new life in Canada. Trudy returned to nursing at the Collingwood General and Marine Hospital in 1961 and in the same year, with Bill, founded Ainley Group. Trudy later served as a Trustee of the Collingwood General and Marine Hospital. Her love of literature and philosophy helped bring a number of Canadian guest poets and writers to the local area. In 1987, Trudy and Bill committed themselves to third world development joining with HOPE International Development Agency in the delivery of clean water to peoples in Africa and Asia.

Trudy had a passion for her community and for medicine and built a home where family and friends always found a cup of tea, glass of wine, or spot at the dining room table. She will be sorely missed and remembered with deepest affection by all whose life she touched.

The Funeral Service will be held on Friday January 8th, 2020 at 1:00 pm at St. Luke’s Anglican Church, 22 Caroline Street West, Creemore. Current regulations restrict the ceremony to family only. Circumstances permitting a more public opportunity to celebrate Trudy’s life will be available in the Spring at her interment at the Creemore Union Cemetery. You may participate in the Funeral Service by viewing the ceremony on the Carruthers & Davidson YouTube channel beginning at 12:45 p.m. In lieu of flowers, donations would be appreciated to Collingwood General and Marine Hospital Foundation, St. Michael’s Hospital Foundation, St. Luke’s Anglican Church, and HOPE International Development Agency.