WINNIPEG — Maple Leafs goaltender Jack Campbell admitted that Toronto's five-game winless skid was starting to weigh on the team. The arrival of Nick Foligno put a charge into the lineup Thursday as the club got back in the win column.
Apr 22, 2021 10:40 PM By: Canadian Press 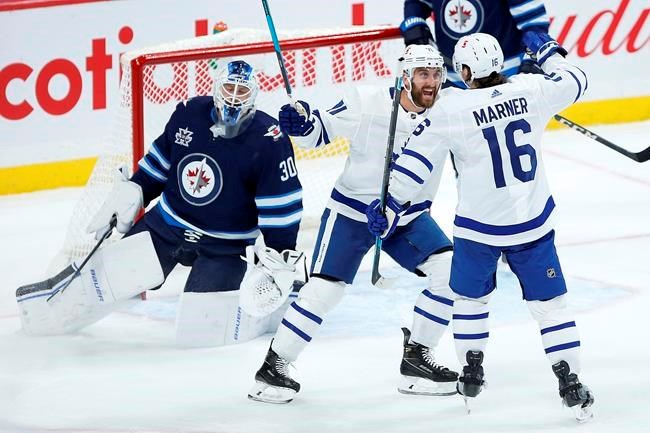 WINNIPEG — Maple Leafs goaltender Jack Campbell admitted that Toronto's five-game winless skid was starting to weigh on the team. The arrival of Nick Foligno put a charge into the lineup Thursday as the club got back in the win column.

Playing on the top line with Auston Matthews and Mitch Marner, Foligno helped build the play that led to Toronto's fourth goal and assisted on Marner's empty-netter as the Leafs beat the Winnipeg Jets 5-3.

"I'm just thrilled for the guys to get a win," Foligno said. "Especially coming into the lineup and being able to celebrate with them, that was a big one for us."

Marner finished with two goals and an assist as the North Division-leading Maple Leafs (29-13-5) moved six points up on the second-place Jets in the standings. Winnipeg is one point ahead of the idle Edmonton Oilers, with both teams holding a game in hand on Toronto.

Auston Matthews, Wayne Simmonds and Jason Spezza had the other goals for the Maple Leafs. Toronto, which had two overtime losses over its skid, has still earned points in 13 of its last 16 games.

"Getting Nick in the lineup put some fire in our belly," Campbell said. "We were all ready to go. Obviously it's a good feeling right now and one we needed for a little while now, so we just want to keep it going."

The game had a wide-open shinny feel in the early going with goals on three of the first four shots.

Marner found Matthews with a long cross-ice pass and his wrist shot from the face-off circle beat Connor Hellebuyck just 27 seconds into the game. It was Matthews' NHL-leading 34th goal of the season.

Simmonds wired a backhand in 51 seconds later but Scheifele halved the deficit at 3:19 when he snapped in a loose puck past Campbell.

The Jets later took advantage of a poor play by T.J. Brodie, who was wide with a pass back to Morgan Rielly. Mason Appleton used the turnover to slide the puck in front to Copp, who tapped it in at 10:26.

Toronto used a delayed penalty to work the puck around for about 30 seconds before Joe Thornton's shot deflected off Spezza and past a screened Hellebuyck at 11:59. The Winnipeg netminder was pulled and replaced by Laurent Brossoit.

Foligno, who had to quarantine after being acquired from Columbus in a three-way deal this month, said he started to settle in later in the game.

Foligno didn't get an assist but helped the Maple Leafs break out ahead of their fourth goal, with Matthews sending a rolling puck to Marner for a fluttering one-timer over Brossoit's shoulder at 12:58.

"You can just tell they know a lot about each other and how they play the game," Foligno said of his new linemates. "You just try and complement that."

Jets captain Blake Wheeler made his return after missing six games due to a concussion. He won a battle down low late in the second period and fed it in front to Connor, who beat Campbell at 17:56.

Winnipeg nearly tied the game midway through the third period when Derek Forbort sent a lob pass over Justin Holl's shoulder to Pierre-Luc Dubois, but Campbell denied him at the goalmouth.

"I thought we were chasing the game, keeping in mind that we hadn't played a game in four days," Wheeler said. "It's tough to do, just to come out and pick right up where you left off. So it took us a period to get into it.

"I thought the back half of the game we played a pretty good game, unfortunately it was just too far out of reach for us."

Brossoit was pulled with about two minutes to go in regulation for the extra attacker. Connor had two quality one-timers from the wing but couldn't find a hole.

Winnipeg forward Adam Lowry suffered an upper-body injury after taking a hit from Alex Galchenyuk and did not return.

Notes: Defenceman Jordie Benn made his Jets debut after being acquired from Vancouver this month. ... Maple Leafs blue-liner Zach Bogosian is expected to miss at least a week with an upper-body injury. He was hurt in Tuesday's 6-3 loss to Vancouver.

This report by The Canadian Press was first published April 22, 2021.