GLENDALE, Ariz. — Jon Gillies looked a bit foolish when he lost sight of the puck at his feet and turned the wrong way as Derek Stepan tucked in a first-minute goal. "I don't think you say, 'Oh, boy,'" the Calgary rookie said.
Feb 23, 2018 1:19 AM By: Canadian Press 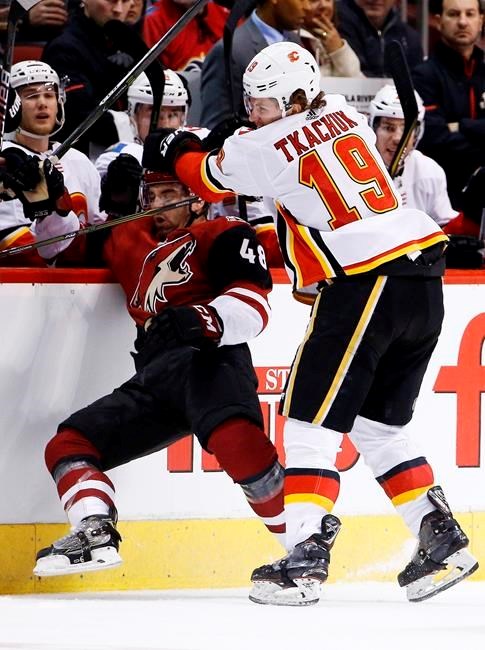 GLENDALE, Ariz. — Jon Gillies looked a bit foolish when he lost sight of the puck at his feet and turned the wrong way as Derek Stepan tucked in a first-minute goal.

"I don't think you say, 'Oh, boy,'" the Calgary rookie said. "I didn't know where it went and it ended up on his stick. Just a bad bounce."

Gillies rebounded to make 35 saves in his first NHL start of the season to help the Flames beat the Arizona Coyotes 5-2 on Thursday night.

"Little bit of rust to shake off," he said.

Called up from Stockton of the AHL with former Coyotes goalie Mike Smith sidelined by a lower-body injury, Gillies made his third appearance of the season and fourth overall in the NHL. The 6-foot-6 former Providence College goalie started and won his NHL debut last April against Los Angeles.

"He was a little nervous in the beginning, but he settled right in," Flames coach Glen Gulutzan said. "What I like about him is he's a big guy that's not afraid to challenge, but he's not overly aggressive in his movements. He doesn't slide out of the net, he's real controlled. A great big body that plays big."

Johnny Gaudreau had a goal and two assists, Sean Monahan added a goal and an assist, and Sam Bennett, Mark Jankowski and Matthew Tkachuk also scored.

Coming off a 7-3 loss Wednesday night at Vegas with David Rittich in goal, Calgary snapped a three-game losing streak and improved to 9-3-1 in its last 13 road games.

"I liked our compete level tonight," Monahan said. "We were hungry and we weren't happy with how we performed last night."

Stepan and Kevin Connauton scored for Arizona. Off since beating Edmonton 1-0 in a Saturday matinee at Gila River Arena, the NHL-worst Coyotes had won four straight and were 5-0-1 in their last six.

"We didn't have it tonight and it's going to be tough to play in this league against teams battling for a playoff spot," Stepan said. "You got to come right in and play every single night. That's what pros do."

Bennett and Gaudreau gave the Flames a 2-1 lead with goals 2:16 apart midway through the first period. Bennett deflected Gaudreau's pass past goalie Antti Raanta, and Gaudreau came down the open left side and fired a wrist shot that squeezed under the goalie's right leg pad for his 20th of the season.

Monahan made it 3-1 midway through the second with his team-leading 28th goal, deflecting Dougie Hamilton's pass past Raanta. Jankowski scored a short-handed goal early in the third, and Tkachuk added his 24th of the season midway through the period. Connauton scored with 2:30 left.

Arizona's Zac Rinaldo hammered Matt Stajan with a shoulder check early in the first, and the Flames' Micheal Ferland retaliated by fighting Rinaldo the next time the Arizona forward hit the ice. Stajan returned to the game for his next shift.

"Our guys got physical and we scored right after that," Gulutzan said. "Our guys rallied around that hit."

Arizona signed Darcy Kuemper to a two-year contract extension, a day after acquiring the 27-year-old goalie from Los Angeles for speedy forward Tobias Rieder and goalie Scott Wedgewood. The 6-foot-5 Kuemper was 10-1-3 with a 2.10 goals-against average and three shutouts in 19 games for the Kings this season. He backed up Raanta against the Flames.

NOTES: Smith missed a chance to make his first start in Arizona since an trade to the Flames. Smith spent the previous six seasons with the Coyotes. In Calgary on Nov. 30, he beat Arizona 3-0. He was injured Feb. 11 in the final seconds of a victory at the New York Islanders. ... Hamilton and Mark Giordano each had two assists for Calgary.

Note: the top three teams per division and the two next-best records in the conference qualify for the playoffs; a winning team is credited with two points and a victory in the W column; a team losing in overtime or shootout receives one point, which is registered in the respective OTL or SOL column.

Vegas, Dallas players kneel for anthems as protests gain momentum at NHL restart
Aug 3, 2020 10:37 PM
Comments
We welcome your feedback and encourage you to share your thoughts. We ask that you be respectful of others and their points of view, refrain from personal attacks and stay on topic. To learn about our commenting policies and how we moderate, please read our Community Guidelines.