MONTREAL — The conference-leading Washington Capitals proved they still have a lot of firepower and are difficult to beat even without Alex Ovechkin.
0
Jan 27, 2020 11:05 PM By: Canadian Press 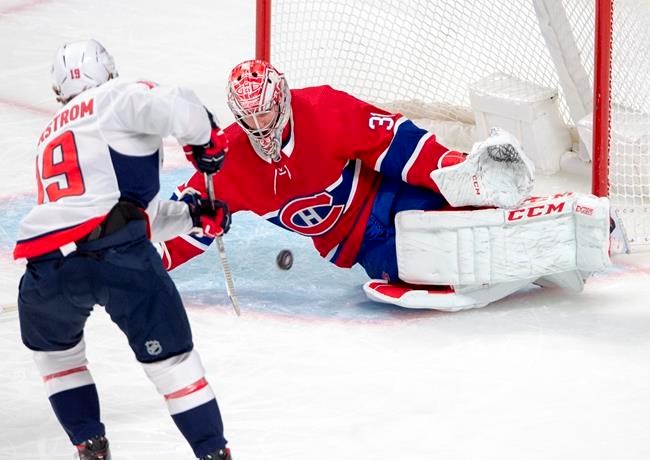 MONTREAL — The conference-leading Washington Capitals proved they still have a lot of firepower and are difficult to beat even without Alex Ovechkin.

Four different players found the back of the net as the Capitals extended their win streak to four games with a 4-2 victory over the Montreal Canadiens on Monday night.

Serving a one-match suspension for skipping last weekend’s all-star game, Ovechkin was out of the lineup for the first time this season.

“That’s a big goal-scoring loss for us there, but we stuck together as a team,” said Vrana, who had a goal and an assist. “We still kept creating chances today, especially that fourth line. They played really good.

“That was a great team win. It’s really important, coming into the playoffs, to know that.”

Tom Wilson, Travis Boyd and Nicklas Backstrom, into the empty net, also scored for the Capitals (34-11-5) while T.J. Oshie had two assists.

The Canadiens (22-22-7) were leading 1-0 on Jeff Petry’s early first-period opener but they gave up three straight goals to fall behind.

Wilson beat Carey Price, between pad and post, on a pass from Vrana behind the net at 18:30 to tie the game. Vrana extended his point streak to nine games with the helper.

Washington took a 2-1 lead 2:03 into the second when Petry accidentally kicked the puck behind his own goal line. Boyd was credited with his third of the year.

Evgeny Kuznetsov stripped Shea Weber of the puck in the corner and directed it into the slot while lying on the ice, which led to Vrana’s five-hole goal to make it 3-1 at 14:51.

“We’re digging ourselves into a hole sometimes,” said Julien. “It’s not always a case of bad luck. Sometimes it’s a lack of concentration. If you want to win, you can’t play that way.

“Our sloppiness is costing us games and we can’t afford to be sloppy.”

Down 3-1, the Canadiens fired 15 shots on net in the third period as they looked to claw their way back. Joel Armia thought he scored five minutes in, but Braden Holtby narrowly snagged the puck off the line in mid-air.

“We had a ton of good scoring chances but Holtby made some big saves for them,” said rookie Nick Suzuki. “We have to find a way to put them in the net. There were some pretty crazy bounces.

“Armia’s just hung up in the air somehow, along the post. Never really seen that before.”

Dale Weise did beat Holtby on the backhand a few minutes later, at 7:30, for his first goal of the season. But Holtby shut the door for the remainder of the game. He made a total 31 saves and improved to 14-2-2 all-time versus Montreal.

Backstrom added the empty netter with 23 seconds on the clock.

The Canadiens are 10 points out of a playoff spot with 31 games remaining. Forwards Jonathan Drouin (wrist), Paul Byron (knee) and Brendan Gallagher (head) all remain sidelined with injuries.

“You see the run this team went on at the end of last year,” said Weise, who was playing in his 500th career NHL game. “We can string some wins. It’s the same bodies in here. We’re going to get some guys back here pretty soon.

“There’s no reason why this team can’t get on a roll and make the playoffs.”

Both teams were coming off their bye week and it showed in the first period with numerous broken plays, offsides and icings.

Notes: Washington improved to 19-6-1 on the road. … The Capitals are 7-1-0 in their last eight games at Bell Centre. … The Canadiens paid video tribute to Kobe Bryant during the American national anthem.

This report by The Canadian Press was first published Jan. 27, 2020.

Romo remains with CBS after agreeing to long-term contract
Feb 29, 2020 2:44 AM
Friday's Games
Feb 29, 2020 1:52 AM
Canada's Fernandez makes Mexican Open final with 6-3, 6-3 semi win over Zarazua
Feb 29, 2020 1:24 AM
Comments
We welcome your feedback and encourage you to share your thoughts on this story. We ask that you be respectful of others and their points of view, refrain from personal attacks and stay on topic. To learn about our commenting policies and how we moderate, please read our Community Guidelines.